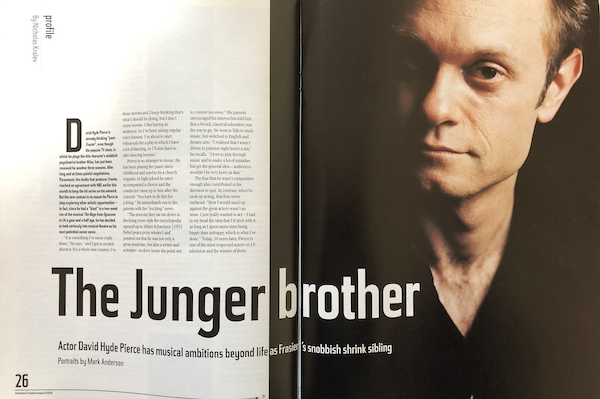 WEST HOLLYWOOD, Calif. — David Hyde Pierce is already thinking post-“Frasier”, even though the popular TV show, in which he plays the title character’s snobbish psychiatrist brother Niles, has just been renewed for another three seasons. After long and at times painful negotiations, Paramount, the studio that produces “Frasier”, reached an agreement with NBC earlier this month to keep the hit series on the network.

But the new contract is no reason for Pierce to stop exploring other artistic opportunities — in fact, since he had a “blast“ in a two-week run of the musical “The Boys from Syracuse” in LA a year and a half ago, he has decided to look seriously into musical theatre as his next potential career move.

“It is something I’ve never really done,” he says, “and I got so excited about it. It’s a whole new country. I’ve done movies and I keep thinking that’s what I should be doing, but I don’t enjoy movies. I like having an audience. So I’ve been taking regular voice lessons. I’m about to start rehearsals for a play in which I have a lot of dancing, so I’ll also have to take dancing lessons.”

Pierce is no stranger to music. He has been playing the piano since childhood and used to be a church organist. In high school, he once accompanied a chorus, and the conductor came up to him after the concert: “You have to do this for a living.” He immediately ran to his parents with the “exciting” news. “The next day, they sat me down in the living room with the encyclopedia opened up to Albert Schweitzer [1952 Nobel peace prize winner] and pointed out that he was not only a great musician, but also a writer and scientist — to drive home the point not to commit too soon.”

His parents encouraged his interest but told him that a broad, classical education was the way to go. He went to Yale to study music, but switched to English and theatre arts. “I realised that I wasn’t driven to practise eight hours a day,“ he recalls. “I love to play through music and to make a lot of mistakes but get the general idea — audiences wouldn’t be very keen on that.”

The fear that he wasn’t competitive enough also contributed to his decision to quit. In contrast, when he took up acting, that fear never surfaced. “How I would stack up against the great actors wasn’t an issue. I just really wanted to act — I had in my head the idea that I’d stick with it as long as I spent more time being happy than unhappy, which is what I’ve done.”

Today, 20 years later, Pierce is one of the most respected actors on US television and the winner of three Emmies, a Golden Globe and a Screen Actors Guild Award for his role on “Frasier”. The part was actually written for him. The first time he met the creators of the show in 1993, Niles Crane didn’t exist in the script. But he made such an impression and looked so much like Kelsey Grammer, who was to play Frasier, that a brother character was instantly born. Pierce signed on to the project without knowing much more than that Niles was a Jungian, while Frasier was a Freudian. Later, the producers came up with a better description: Niles is Frasier — if he hadn’t gone to Boston and met the people at “Cheers”.

One of the longest-running TV series (11 years) and an icon for millions of viewers around the world, “Cheers” had been “Frasier’s” screen “birthplace“. That history helped a lot when the concept of a new show was presented to studio and network executives. “If someone had gone to any network,” says Pierce, “and pitched the idea of a radio psychiatrist and his brother who’s a snob, they would have never picked it up in a million years.” He also points out that “there was an audience who knew the title character, so in writing the pilot episode there were references they could make from his past life without the relentless exposition you often do to fill people in on who’s who”.

Although he loves playing Niles every week — for eight years now — Pierce doesn’t identify with his character. They do have things in common (the Yale education and the piano-playing), but Pierce has said he’s neither as “finicky” nor as “neat” as Niles. He acknowledges, however, that many viewers don’t really separate him from Niles. “I was walking on the street the other day and this huge moving van drove by with three guys on the front seat all looking like “Hell’s Angels”. They blew the horn and the guy driving said ‘Hey Niles, you crazy bastard!’ I think that’s my favourite reaction — it sums up the character.”

A slim, tall man with thinning blond hair, Pierce, who turns 42 on Tuesday, has arrived at a popular west Hollywood café in jeans and a casual — and slightly unbuttoned — blue shirt. As the waiter smiles and talks to him by first name, he says one thing his fame has helped him to discover is that, both in the US and abroad, “the people who tend to come up to me are exuberant, enthusiastic and love the show. ‘Frasier’ is not the kind of show people would vehemently dislike in such a way that they feel compelled to mug you and tell you how much they hate you personally and everything you stand for.”

In Canada once, a “tiny Spanish man” ran up to him and said, “I’m you! I’m you!” It turned out the man was an actor who does Niles’ voice-over in Spanish-speaking countries. However, Pierce does often get the unsolicited opinions of viewers on what Niles should do next. As the romance between him and Daphne (Jane Leeves) heated up on the show, he received angry letters from religious people denouncing the relationship between the already-married characters. At the same time, a man upbraided him for not being decisive enough: “What the hell is your problem? You love Daphne, toss that other girl!”

The writers on “Frasier”, as on most other shows, rarely consult the actors about the script, Pierce says. The only time that such a discussion took place was when Leeves got pregnant “in real life”. “They dealt with it by causing her to gain weight on the show.” And just before Leeves was supposed to give birth, Daphne went away to a spa. “It was very important that the issue wasn’t her being overweight, since weight gain or loss is a very sensitive issue and not to be treated lightly, especially when so many people in Hollywood are really thin.”

He also says “Frasier” tends to stay away from “political realities”, but “not because we don’t want to be political — the topicality is gone soon”. The show never made a reference, for example, to the mass demonstrations against the December 1999 meeting of the World Trade Organisation in Seattle, where “Frasier” is set. The writers couldn’t resist, though, the temptation that last year’s US election offered. “We just did an episode in which Frasier and I run for president of the wine club and I beat him. In my acceptance speech, I thank him for graciously conceding after the fourth recount.”

Politics may rarely find its way into the “Frasier” scripts, but two potential strikes in the next couple of months could disrupt the show’s production schedule. The Writers Guild of America is threatening to walk out on May 1, with demands that the use of the so-called possessory credits directors take (which read “A film by…”) be limited. They also want to be employed while a film is in production, so that they can make changes in the script and not have directors and stars mess with their lines. As well as the writers, the Screen Actors Guild and the American Federation of Television and Radio Artists, representing 135,000 actors, are scheduled to call a strike on June 30.

“We are all watching the Writers Guild very carefully — they are clearly making a good faith effort and keep extending their talks,” says Pierce. “I’m very aware of the ripple effect of strikes, not only in the entertainment business. How you negotiate for getting more attention I don’t know. Directors and actors do rewrite lines on a movie set, but that doesn’t happen on a TV show without the writers saying that’s OK. As an actor, though, I also think a film is a director’s medium.”

Television writers usually start creating the new season on June 1, he notes, so theoretically, if they go on strike on May 1, there is a month for the dispute to be resolved without stopping production for the season’s start in September.

Unlike actors on other hit shows, the cast of “Frasier” never discuss salaries — Pierce says they don’t feel the need for that information to be publicised. But he makes it clear that the amount he and his colleagues make isn’t “nearly as interesting” as the salaries of the “Friends” stars, each of whom gets $750,000 per episode. “There is no question that we are extremely well-paid for what we do and we know how lucky we are to be in the .001 percent of actors who not only make a living but an exquisite living.”

Pierce’s lifestyle was hardly exquisite before “Frasier”. After Yale, he went to New York “to see whether acting was something I seriously wanted to do”. He was rejected and had “some terrible auditions”, but ended up working with “great people, and that kept me in”.

His first acting job was in “Beyond Therapy” on Broadway, and was followed by roles off-Broadway and in regional theatre in the US. In late 1988 he was cast in a Peter Brook production of Chekhov’s “The Cherry Orchard”, which toured the Soviet Union and Japan for three months. “It’s very hard to encapsulate what that experience was like, especially in Moscow,” he says. “We did the play in English and the theatres were packed. At that time, theatre was lifeblood to the Russians. I realised that, while I’d never want to give up the freedom we have in this country, theatre is fundamentally entertainment here. In a place where you are not allowed to say everything that’s on your mind, theatre becomes vital.”

After the tour, he appeared in “The Heidi Chronicles” on Broadway, which he considers his big break. In the early 1990s, he went to LA to audition for various television roles and landed the part of a chronically depressed congressman in “The Powers That Be”. The show was speedily cancelled, but it helped Pierce get noticed by the producers of “Frasier”. He also earned several film credits, including “Sleepless in Seattle” (1993), where he played Meg Ryan’s brother; Oliver Stone’s “Nixon” (1995) and last year’s “Isn’t She Great” and “Chain of Fools”. His latest movie, “Wet Hot American Summer”, had its première at the Sundance Film Festival in January.

Along with juggling work in television and films, Pierce is an active national board member of the Alzheimer’s Association. His grandfather had died of the disease; later his father developed “probably Alzheimer’s or some kind of dementia” and died. His aunt passed away last year with the same symptoms.

“Once you get touched by that disease, you don’t need to be asked twice to get involved,” he says. “It’s so insidious, so destructive not only for the person who gets it but for everyone around. I keep struggling to find a way to convey to people who haven’t experienced it the emotional, psychological and physical damage it takes on all the family. To be married to someone for 50 years, and when you walk in the room they have no idea who you are, and your life together means nothing to them — I can’t put that into words.”