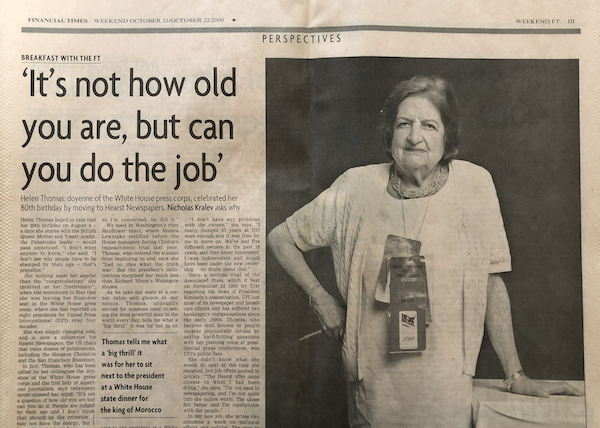 ‘It’s Not Now Old You Are, But Can You Do the Job’

WASHINGTON — Helen Thomas hoped in vain that her 80th birthday on August 4 — a date she shares with the British Queen Mother and Yasser Arafat, the Palestinian leader — would pass unnoticed. “I don’t want anyone to know,” she said. “I don’t see why people have to be stamped by their age — that’s prejudice.”

But nothing made her angrier than the “congratulations” she received on her “retirement”, when she announced in May that she was leaving her front-row seat in the White House press room, where she had reported on eight presidents for United Press International (UPI) over four decades. She was simply changing jobs, and is now a columnist for Hearst Newspapers, the US chain that owns dozens of publications, including the Houston Chronicle and the San Francisco Examiner.

In fact, Thomas, who has been called by her colleagues the doyenne of the White House press corps and the first lady of American journalism, says retirement never crossed her mind. “It’s not a question of how old you are but can you do it. People are judged by their age and I don’t think that should be the criterion. I may not have the energy, but I have the enthusiasm.”

Although she had flown back from a speaking engagement in Milwaukee very late the night before, Thomas is early for our 7am breakfast (she was notorious for arriving at the White House press room before everyone else, often by 5.30am). I find her sitting in the hotel lobby, her head buried in a newspaper.

As we walk to the restaurant, she tells me she is off to Little Rock, Arkansas, the next morning to give a lecture at the local library, and she will use the opportunity to check on the preparations for the future Bill Clinton Presidential Library.

She says she never worries about past presidents, though she understands Clinton’s reluctance to leave the White House. “He loves that job. He says that even the bad days are good, and he sure has had his share of bad days. His enemies went after him day and night — for eight years. He deserves credit for the economic prosperity, although no one is willing to give it to him very loudly. But as far as I’m concerned, he did it.”

We meet in Washington’s ritzy Mayflower Hotel, where Monica Lewinsky testified before the House managers during Clinton’s impeachment trial last year. Thomas, who covered the scandal from beginning to end, says she “had no idea what the truth was”. But the president’s indiscretions surprised her much less than Richard Nixon’s Watergate abuses.

As we take our seats at a corner table and glance at our menus, Thomas, unusually excited for someone used to seeing the most powerful man in the world every day, tells me what a “big thrill” it was for her to sit next to the president at a White House state dinner for the king of Morocco in June.

“It was really emotional,” she recalls. “I had been to state dinners before, but never next to the president.”

Now, sitting next to just another colleague, she recites her choice of breakfast to the waiter: “I’d like one egg over, light, with bacon and an English muffin, toasted.” Trying to compensate for having ignored the menu until now, I quickly decide on the signature Mayflower pancakes.

When Thomas abruptly quit her UPI job, most press reports linked her resignation to the battered wire service’s takeover by News World Communications, which was founded by the Rev Sun Myung Moon, leader of the Unification Church. Thomas wouldn’t comment on that at the time, saying in a laconic statement: “I wish the new owners all the best, great stories and happy landings.”

But now she insists that the new ownership was by no means the reason for her departure. “I don’t have any problems with the owners,” she says. “I really thought 57 years at UPI were enough and it was time for me to move on. We’ve had five different owners in the past 18 years, and they never intervened. I was independent and would have been under the new ownership — no doubt about that.”

Once a serious rival of the Associated Press, which it beat on November 22, 1963, by first reporting the news of President Kennedy’s assassination, UPI lost most of its newspaper and broadcast clients and has suffered two bankruptcy reorganisations since the early 1980s. Thomas, who became well known to people outside journalistic circles by asking hard-hitting questions with her piercing voice at presidential press conferences, was UPI’s public face.

She didn’t know what she would do next at the time she resigned, but job offers poured in quickly. “The Hearst offer came closest to what I had been doing,” she says. “I’m not used to newspapering, and I’m not quite into the online world. The shoes felt better and I’m comfortable with the people.”

In her new job, she writes two columns a week on national affairs and politics. She goes to the White House again every day and has her old seat back.

Always determined to be “part of the action” in Washington, Thomas went there in the summer of 1942, after graduating from Wayne University in Detroit, where her family moved when she was four years old. One of nine children of immigrants from Tripoli, Syria (now part of Lebanon), Thomas was born in Lexington, Kentucky. She decided to become a journalist in high school, where she edited the student newspaper.

It wasn’t too hard for her to find a job in Washington — “it was wartime and women were a little bit more accepted because they were taking every young man who had a pulse, so there were vacancies”. She started out as a copy girl at the now-defunct Washington Daily News for $17.50 a week, but was soon sacked for taking part in a strike of the Washington Newspaper Guild. She wandered about the National Press Building for a week until she was hired by United Press (later UPI), which had the same owner as the Daily News, the Scripps-Howard chain.

Thomas covered the Justice Department during the civil rights movement and the Department of Health, Education and Welfare (now Department of Health and Human Services) when the surgeon-general first announced a link between lung cancer and tobacco. “There was never a day without news,” she recalls.

In 1960, she was assigned to cover Jacqueline Kennedy on her husband’s campaign trail. “But as soon as I hit the White House, I covered men, women, children, dogs, cats — I was never focused totally on women.”

Thomas completely immersed herself in her work, travelling with “her” presidents across the US and around the world. She remained single until 1971, when she married AP reporter Doug Cornell — but even as First Lady Pat Nixon was announcing their engagement at the White House, Thomas was “too busy, taking notes for a story”.

Cornell died of Alzheimer’s disease 11 years later. Although Thomas has spoken at an Alzheimer’s luncheon and has given copies of her book “Front Row at the White House: My Life and Times” for a charitable auction, she has been cautious about using her public image for private purposes. “Reporters shouldn’t get involved in too many causes,” she says. “You have to be objective, which doesn’t mean that you can’t be supportive.”

Thomas vehemently rejects the notion that the US press has a liberal bias. “Does that mean that we care about the poor and the sick? Is that so horrible? I have to laugh, because I think the opinion press is very conservative.”

She doesn’t think that the explosion of media outlets and dotcoms has lowered the standards of the mainstream news organisations, but finds it a problem that “everybody with laptops think they are journalists”.

“We are supposed to have ethics and standards, to check and understand, because when you write, you can really hurt someone. There are no editors on the internet and there are problems in terms of how you keep the professional ethics intact.

“I don’t deny anyone the right to have their say — we live in a democracy and I don’t believe in censorship — but I’d like them to know there are standards about how you deal with a story.”