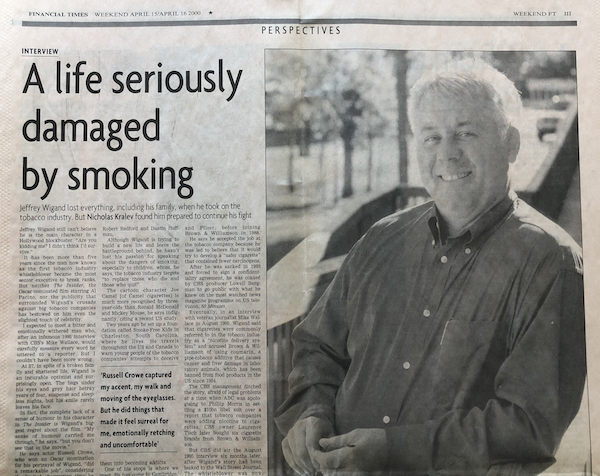 A Life Seriously Damaged by Smoking

CAMBRIDGE, Mass. — Jeffrey Wigand still can’t believe he is the main character in a Hollywood blockbuster. “Are you kidding me? I didn’t think I’d survive.”

It has been more than five years since the man now known as the first tobacco industry whistleblower became the most senior executive to break ranks. But neither “The Insider”, the Oscar-nominated film starring Al Pacino, nor the publicity that surrounded Wigand’s crusade against big tobacco companies has bestowed on him even the slightest touch of celebrity.

I expected to meet a bitter and emotionally withered man who, after an infamous 1995 interview with CBS’s Mike Wallace, would carefully measure every word he uttered to a reporter. But I couldn’t have been more wrong.

At 57, in spite of a broken family and shattered life, Wigand is an incurable optimist and surprisingly open. The bags under his eyes and grey hair betray years of fear, suspense and sleepless nights, but his smile rarely leaves his face. In fact, the complete lack of a sense of humour in his character in The Insider is Wigand’s biggest regret about the film. “My sense of humour carried me through,” he says, “but you don’t see that in the movie.”

He says actor Russell Crowe, who won an Oscar nomination for his portrayal of Wigand, “did a remarkable job”, considering the limited observation time he had. “He spent a day with me. We played golf and had a meal — that was it.”

Crowe, 22 years Wigand’s junior and a native of New Zealand, “captured my New York accent, my walk and the moving of the eyeglasses”, Wigand says. “But he did things that made it feel very surreal for me, emotionally retching and uncomfortable.” What matters, however, is that Crowe played him “with honour”, says Wigand, and that the film “requires you to think”.

“The social relevance of this movie is probably bigger than ‘All the President’s Men’,” he says proudly, referring to the 1976 Alan Pakula picture about the Watergate scandal starring Robert Redford and Dustin Hoffman.

Although Wigand is trying to build a new life and leave the battleground behind, he hasn’t lost his passion for speaking about the dangers of smoking, especially to children, whom, he says, the tobacco industry targets “to replace those who die and those who quit”. The cartoon character Joe Camel (of Camel cigarettes) is much more recognised by three-year-olds than Ronald McDonald and Mickey Mouse, he says indignantly, citing a recent US study.

Two years ago he set up a foundation called Smoke-Free Kids in Charleston, South Carolina, where he lives. He travels throughout the US and Canada to warn young people of the tobacco companies’ attempts to deceive them into becoming addicts.

One of his stops is where we meet. He has come to Cambridge, Massachusetts, to speak not to children, but to future policy-makers at Harvard University’s Kennedy School of Government.

Wigand says teaching has always been his vocation. After he left his $300,000 job as vice-president of Brown & Williamson, America’s third-largest tobacco company, he became a high school teacher in Louisville, Kentucky, where he taught science and Japanese (for a salary of $30,000).

Wigand was born in the Bronx and received a PhD in biochemistry and endocrinology from the University of Buffalo in upstate New York. He held senior management positions at leading American healthcare companies, including Johnson & Johnson and Pfizer, before joining Brown & Williamson in 1988. He says he accepted the job at the tobacco company because he was led to believe that it would try to develop a “safer cigarette” that contained fewer carcinogens.

After he was sacked in 1993 and forced to sign a confidentiality agreement, he was coaxed by CBS producer Lowell Bergman to go public with what he knew on the most-watched news magazine programme on US television, “60 Minutes”.

Eventually, in an interview with veteran journalist Mike Wallace in August 1995, Wigand said that cigarettes were commonly referred to in the tobacco industry as a “nicotine delivery system” and accused Brown & Williamson of using coumarin, a pipe-tobacco additive that causes cancer and liver damage in laboratory animals, which has been banned from food products in the US since 1954.

The CBS management ditched the story, afraid of legal problems at a time when ABC was apologising to Phillip Morris in settling a $10bn libel suit over a report that tobacco companies were adding nicotine to cigarettes. CBS owner Laurence Tisch later bought six cigarette brands from Brown & Williamson.

But CBS did air the August 1995 interview six months later, after Wigand’s story had been leaked to the Wall Street Journal. The whistleblower was now national news and he was sued by Brown & Williamson for breaching his confidentiality agreement. The case was dismissed in June 1997 as a condition of the largest settlement — between 40 states and the tobacco industry — in US history. So Wigand’s lawsuit was dropped and his legal bills paid by CBS.

But his nightmare was far from over. The 500-page dossier on his personal life that Brown & Williamson amassed in an attempt to smear him as a wife-beater and shoplifter and, he claims, the intimidation that came from the company, left a lasting scar. His wife left him taking their three children and he lost everything he owned.

But he would rather not look back. “If it had been a good marriage, it would have survived and be stronger,” he says. His former wife, Lucretia, remarried soon after the divorce and now lives in Texas. “I don’t know how she’s doing,” says Wigand. “She is now suing the Disney Company, which released The Insider, for $10bn because of her (negative) portrayal.”

Wigand’s daughters — now 11, 13 and 26 — are his biggest joy. He brightens when he talks about them. “The kids come to visit me periodically on a schedule. I just had them for spring break. We had a great time.”

He says he has a “tremendous relationship” with his eldest daughter, Rachel, who is married and the owner of a spa; she often travels with her father and accompanied him to the Academy Awards last month. “She also came on a cruise with me, since I don’t have a significant other yet, and I don’t want to share those moments with someone who doesn’t deserve it.”

Rachel, who lives in Kentucky, kept her father’s surname despite the trouble it has caused to many people there. “Kentucky is not a very pleasant place,” says Wigand. “There are some great folks there, but there is no peace for me, which is why I had to leave.”

Being with his own daughters helps Wigand to remember the thousands of children around the world who light up a cigarette for the first time every day. He is determined to continue his battle and hopes to take it outside North America one day.