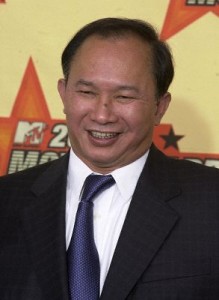 SANTA MONICA, Calif. — John Woo is concerned that he will go down in cinema history only as an action film director, albeit one of the masters. So the man who made his name in Hong Kong with the distinctive balletic style of his blood-soaked movies, and then conquered Hollywood with “Face/Off” and “Mission: Impossible 2”, has decided to move away from what he does best and try his hand at drama — maybe even a musical.

“I want to do a film without violence,” he says in his office at the MGM complex in Santa Monica, California, “and a musical is one of my biggest dreams. There is so much confusion in the world today, so much hatred and lack of understanding, and I’d love to make noble and spiritual films.”

Woo describes himself as a moralist, and insists that his action movies, in which hundreds of corpses fly in the air and blood flows freely, are in fact his way of rebelling against crime and violence. He says his work’s central themes have always been family, friendship, loyalty and honour. Now he is about to begin work on his first “character drama” — a picture about the friendship between two men, Irish and Chinese, entitled “Men of Destiny”. And he has just completed a film that could be categorised as a transition piece, for it combines graphic violence with personal and social drama.

A second world war movie called “Windtalkers”, it is based on the mission of several hundred Navajo Indians recruited as US marines and trained to use a secret military code derived from their native language. It opens in the US next week and will be released in the UK later this summer.

The battle scenes in “Windtalkers” are presented in great detail, but, unlike in Woo’s other movies, he wanted them to be “real and convincing”, without “stylish techniques and special effects”. “I wanted to make the action sequence like a documentary,” he says. So to recreate the brutality of the 1944 battle with Japan for the Pacific island of Saipan, he used 14 cameras running simultaneously — on a helicopter, in army vehicles, tanks and trenches, with the operators camouflaged in military uniforms.

As proud as Woo is of his first on-screen depiction of a real war, he considers telling the story of the transformation relationship between two soldiers an even bigger achievement. Joe Enders, a war-weary marine played by Nicolas Cage, has been badly wounded in a Solomon Islands battle, in which most of his squad has been killed. After a partial recovery, he is anxious to return to the front, but he finds his new assignment closer to babysitting than fighting: he is chosen to guard one of the Navajo soldiers trained to transmit messages in the secret code, and to protect the code at all costs. He dutifully follows his superiors’ orders, but treats his assigned charge, Ben Yahzee (Adam Beach), with hostility and condescension. They soon become friends, however, with Yahzee learning to be tough and kill for his own survival, while Enders regains some of his humanity.

“I hate war and people killing each other,” says the Chinese-born Woo. “My films have an anti-war message. That’s why I wanted to put an emphasis on the friendship between Enders and Yahzee — war damages everything; only friendship is forever.”

If anyone had any doubts that Woo likes to work with a familiar group of actors, Windtalkers provides confirmation. Cage appeared in “Face/Off”, along with John Travolta, whom Woo had previously cast in “Broken Arrow”, which also starred Christian Slater, who now has a part in “Windtalkers”. “After ‘Face/Off’, Nic and I became good friends,” the director says of Cage. “We have much in common — we both like to experiment, for example. He is such an instinctive and creative actor.”

Woo, who likes his “actors to bring their own experience and feelings into their characters”, says he doesn’t “give much direction” and keeps rehearsals to a minimum. Instead, he prefers to “spend time talking to them and get to know them better personally: what they like and hate, and what their philosophy is”.

A rare exception to the rule in “Windtalkers” is the 29-year-old Beach — “the film’s big discovery” — whom Woo had never met before. Casting his part was difficult. “We met with Navajo leaders and they suggested using Navajo actors,” says Woo. “So we interviewed 400 people but couldn’t find the right one for the role. I saw Adam in ‘Smoke Signals’ and thought he was very charming and natural, with a great presence. Although Adam was from a different tribe — he is a Native American from Canada — the Navajo people agreed with my choice.”

Born Yu Sum Woo in southern China in 1946, he almost died of a mysterious illness at the age of three, and his father, a teacher, spent all his savings on medical care. The family moved to Hong Kong when Woo was five, but life became even harder. His father fell ill with tuberculosis, and his mother worked on a construction site, “pounding rocks”, to provide for her husband and three children. Woo paid for his education with donations another family was sending him through his church. One of the few things his mother could afford when he was a child was cinema tickets.

“The movie theatre and the church were heaven. I fell in love with movies — the musicals gave me a lot of comfort, hope and inspiration; they made me feel that life is beautiful — but I never dreamt of being a film-maker,” Woo says. “When I was about 10, I liked to draw on pieces of glass — a Chinese hero or a cowboy on a horse. Then I’d cover myself with a blanket and use a torch to project the image on the wall. I’d move the torch up and down, and the image also seemed to be moving.”

In college, Woo began making short films and entered the local movie industry as an assistant director after graduation. “In 1973, a friend of mine got financing for a low-budget independent film called ‘The Young Dragons’, but he didn’t know how to direct it and asked me.”

Over the next nearly two decades, he made more than 20 films and in 1992 arrived in Hollywood. His first movie there, “Hard Target” (1993), was largely a vehicle for Belgian karate star Jean-Claude Van Damme and turned out to be an unimpressive as a directorial achievement. Three years later, “Broken Arrow”, about a maverick air force pilot who hijacks nuclear warheads, fared much better, but it was with “Face/Off” (1997), a thriller about an FBI agent and a terrorist who trade faces and lives, that Woo hit the big time. His success — and fortune — nearly doubled in 2000 with “M:I-2”, starring Tom Cruise.

Adjusting to Hollywood’s demands, especially understanding and accepting the US censorship, wasn’t easy for Woo. He had to submit “Hard Target” to the censors seven times before the violence scenes in it were approved.

“The market in Hong Kong is very small and one doesn’t have to appeal to a large and diverse audience,” he says. “In America, I had to change the way I work significantly and make my films watchable by all kinds of people. I had to tone down the violence substantially.”

He says he trusts his instincts as a director and believes in his work’s uniqueness. “I don’t watch other movies, especially of the same genre, when I’m making a film,” he explains. “So I’m not afraid of being influenced by what others do.”