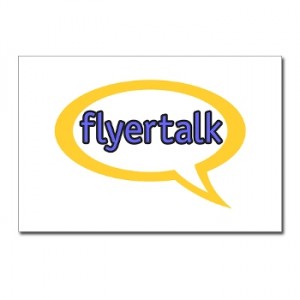 About two years ago, an economics professor in Maine thanked me for the free travel advice that I had unknowingly given him through my posts on a Web site called FlyerTalk.com.

While my experience on the fly has taught me a great deal, little did the professor know that most of what I was sharing online I had learned from FlyerTalk.

The site, which just celebrated 10 years and 10 million posts, has helped thousands of travelers plan trips that might have seemed overwhelming at first, deal calmly with delays or cancellations and maximize benefits from airline and hotel loyalty programs.

FlyerTalk is free, and everything you can learn from it comes from fellow travelers, not from the people who run the site. FlyerTalk offers a healthy variety of viewpoints, which puts you in a good position to make decisions that are best for you.

Debbie Shatz, a FlyerTalk member since 2002, said that before discovering the site, the only thing she knew about loyalty programs was that she could earn points and miles. She soon learned how to “best leverage the value” of elite status, “flying mostly in international business or first class, sometimes using miles, other times with upgrade certificates.”

“I’ve developed a desire to travel beyond anything I had imagined previously,” said Ms. Shatz, a Fairfax financial-services consultant whose business trips are usually domestic.

Thanks to the information that she has gotten from the forums on FlyerTalk, she said, she now has the tools and knowledge necessary to deal with delays and cancellations. Those include knowing whom to contact, what to ask and how to investigate alternatives she can suggest to a reservations agent that may not show up automatically on an airline computer.

“FlyerTalk has provided me with those tools and know-how to navigate an increasingly frustrating travel experience to make it that little bit less frustrating,” she said.

You don’t have to be a member of FlyerTalk to read it, and there are many self-described lurkers on the site. Last week, for example, you could have learned how a passenger handled a United Airlines flight from Chicago to Tokyo, which started out with a mechanical delay, had to divert to Winnipeg, Canada, because of a medical emergency onboard and then made an unscheduled overnight stop in San Francisco because the crew had exceeded its allowed flying time.

Some of the most frequent threads involve the best seats on various aircraft flown by different airlines, free upgrade strategies, cheap fares, travel promotions and comparisons among several carriers flying a certain route or several hotels in a certain city.

The latest travel industry news and gossip can also be found on FlyerTalk, but in that field, it’s hardly unique. There is solid competition from Web sites such as airliners.com and the online editions of magazines such as Global Traveler and Business Traveler.

What makes FlyerTalk unique is that it has become a community, according to dozens of “FlyerTalkers,” as they call themselves. Most of them have met other members in person — either at impromptu happy hours or dinners in various cities or during a “Do,” an elaborately planned event that could last several days and sometimes involves group travel on the same flights.

The annual “gayla” in Palm Springs is popular with gay FlyerTalkers, and the Singapore “Do and Mileage Run” takes place every January.

Sandra Marks-Webster, a children’s mental-health counselor from Soquel, Calif., was one of 18 “FlyerTalkers” on a “Coast-to-Coast Mega Do” last winter on a flight from Washington to Los Angeles. The group met with dozens of fellow members on the ground in both cities during a weekend of festivities.

“Many of us have similar goals — building elite status on an airline so that we can travel in comfort at a more affordable price in the near future,” she said. “Even if we don’t know each other, we are all speaking the same language.”