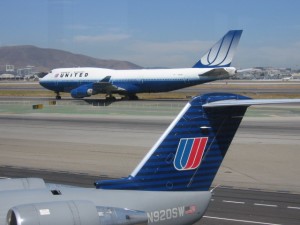 At about 9 p.m. last Monday, Delta Air Lines Flight 9 was over eastern Canada on its way back from Cairo. At the same time, Delta Flight 9 took off from New York en route to Los Angeles. That doesn’t make sense to you? Well, it does to the airline industry.

The flight taking off was the “continuation” of the flight that hadn’t yet landed because of a five-hour delay. Delta sells Cairo-Los Angeles as a “direct” flight with a stop in New York, but in reality, that journey consists of two separate flights that have nothing in common except for number 9.

The first one goes from Cairo to New York on a Boeing 767 aircraft, and the second from New York to Los Angeles on a Boeing 737. The arrival of the first leg is evidently not a condition for the departure of the second.

That practice is by no means limited to Delta. On Sept. 6, the “continuation” of United Airlines Flight 902 from Washington to Munich left two hours before the first leg even took off from Denver.

“Direct” flights have been around for more than two decades, and by now frequent travelers know that they are not the same as nonstop flights. But because the Department of Transportation never provided a legal definition, airlines have bent the concept to the point where many “direct” flights are no different from connecting flights. As a result, the advertised benefits of “seamless travel” for passengers have all but vanished.

Initially, a “direct” flight was supposed to consist of more than one leg operated by the same plane. Later, plane changes were introduced, but the second leg was supposed to leave from a gate close to the arrival gate of the first leg. Then the gates no longer mattered, but the “continuation” was supposed to wait until the previous flight got in. Now that’s out the window, too.

Airlines around the world have “direct” flights, but most of them try to honor the original spirit of the practice and operate all legs with the same flight number on one aircraft. Some U.S. carriers, such as American Airlines and Southwest Airlines, do that domestically and on their Caribbean and Central American services, where distances are often within similar ranges.

Trans-continental “direct” flights are a different story. Their domestic portion is almost always operated by smaller aircraft, such as Boeing 737 or Airbus 320, while the international leg is flown on a “wide body,” such as Boeing 777 or Airbus 330. You often need to change not only planes but terminals as well — and, of course, you must clear immigration and customs at your first port of entry back into the United States.

The champions of those fake “direct” flights are Delta, United and US Airways. Most of their international flights — dozens of them — have a domestic tag with the same number. Continental Airlines had 18 such flights in last week’s schedule, American had one and Northwest Airlines had none.

“We do it for competitive reasons,” said Delta spokeswoman Susan Elliott. “We try pairing up higher-demand connection markets.” She added that all passengers on the delayed Cairo flight were taken care of regardless of whether they were booked on the “direct” flight or on any connections.

As frequent flyers have noticed, you get fewer miles in your account than you’ve actually flown because direct distances are always shorter. In addition, upgrades are much more difficult to confirm in advance. They require space on both flights to be available at the same time, which rarely happens, and you are not allowed to confirm one and wait-list the other, as you can do with separate connecting flights.

There are only two minor benefits from “direct” flight to passengers. The first one is that you are not charged for airport taxes in the connecting city, but that usually saves about $10 on average. The second only applies if you buy an around-the-world ticket. Those special fares limit the number of flights you can take, and having two flights count as one could keep you within that limit.

So next time you book a trip online, keep your eyes open. Most airlines’ Web sites show a “direct” flight as one segment. You will see “1 stop” somewhere in the same box, but, except in Continental’s case, you have to click on the details to find out where that stop is and how long the layover will be. Some carriers, such as Southwest, don’t offer those details at all. American’s site is the only one that displays a “direct” flight as two separate segments.

“American makes it clear to customers on our Web site that the flight is a connecting flight, even though the flight number may be the same,” said spokesman Tim Smith.