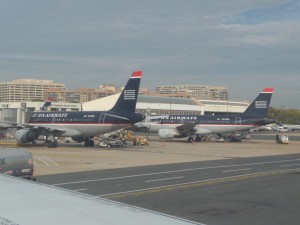 Can an airline be a low-cost carrier, nickel-and-diming most of its passengers, while offering luxury to a few others and charging them $15,000 for it? And is that an “all things to all people” model or a version of “divide and conquer”?

Executives at the so-called legacy carriers know that a huge part of their revenue comes from passengers who pay for business and first-class tickets, so they are trying to keep them happy by installing flat beds, upgrading entertainment systems and serving gourmet meals.

However, airline chiefs also realize that most people on their planes sit in coach and can’t afford $7,000 to fly to Europe in business class. Because economy passengers pay what the airlines consider low fares, carriers are trying to minimize the costs associated with carrying those fliers.

As most travelers know by now, the coach experience has been going downhill for years, particularly on domestic flights. Extra charges are being leveled for food, drinks, headsets, luggage and even seat selection, although most of those fees have not been implemented on international flights.

“To maintain low fares, we have ‘unbundled’ our pricing,” said American Airlines spokesman Tim Smith. “Above that fare, [passengers] alone decide which other services they wish to utilize, and they only pay for those they choose to use.”

At the same time legacy carriers have been reducing the value of their coach product, they have been working hard on improving their so-called premium cabins. All six of those airlines — American, United, Continental, Delta, Northwest and US Airways — have sleeper seats in business class on at least some of their wide-body aircraft operating international flights.

United led the way last year in bringing 180-degree flat beds to the U.S. market, although it has converted just about 17 percent of its international fleet so far, according to its Web site. It’s also installing a new entertainment system with 150 hours of programming and 15.4-inch individual screens in business class.

Economy cabins on old aircraft have remained largely unchanged across the industry, although Mr. Smith said American “will redo the entire interior” of its Boeing 757 fleet next year. If an airline gets new planes, the coach cabin may be different, as is the case with Delta. It “offers additional legroom” on its new Boeing 777 aircraft, said spokeswoman Susan Elliott.

Brett Snyder, who writes a popular travel blog, Cranky Flier, said the legacy carriers approach the coach and premium cabins “individually,” as if they are not on the same plane. “In the international premium cabin,” he said, “the airlines see dollar signs, so they pour money into it and try to make it competitive on the world stage.”

There are lower premium fares in some markets, but they must be purchased as early as 60 days in advance. Many business travelers also benefit from corporate discounts.

No matter what improvements U.S. carriers make on their international fleets, they “usually come up short” in terms of global product competitiveness “despite their best efforts,” Mr. Snyder said. “The domestic premium cabin is a joke. It gets very little attention unless some bean counter thinks he can get some costs out of the operation by cutting something.”

With all their troubles, the airlines still think they can be players in both the low-end and high-end markets at the same time. “Our strategy is to cater to both business and leisure travelers and offer a product mix that appeals to both groups,” said US Airways spokeswoman Michelle Mohr.

Singapore Airlines, however, doesn’t think nickel-and-diming mixes well with real luxury because it hurts a company’s brand. It repeatedly has been named best airline in the world in various rankings, and its very different model is based on a “full-service mind-set,” said spokesman James Boyd.

“We try to provide the best travel experience, with robust and consistent delivery, no matter in which cabin you are sitting,” he said.