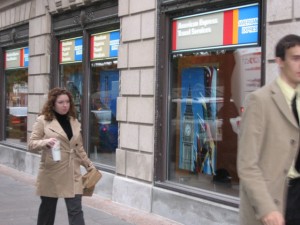 The Washington office of American Express.

How many frequent-flier miles or hotel points have you earned without setting foot on a plane or sleeping in a bed other than your own? To what lengths would you go to beef up your account?

Most of us have credit cards that earn points with at least one of the many loyalty programs available. There also are Web sites that track promotions in various industries on a daily basis. Then there are those deals that were never meant to be deals.

About two years ago, American Express Co., the fourth-largest U.S. credit card issuer, began what company officials called a pilot program that allowed customers to use their cards to buy traveler’s checks without the standard $15 fee. The limit was set at $1,000 a week per card.

Several months later, reports surfaced on the Internet that those transactions appeared as regular purchases on card statements, and if you had a co-brand American Express card from companies such as Delta Airlines or Hilton Hotels Corp., you could earn miles or hotel points.

Having figured out that they could amass thousands of points at no cost, scores of cardholders descended on American Express offices around the country to buy traveler’s checks, even though they didn’t really need them. Although some of them used the checks for various purchases, most simply deposited them in their bank accounts and then paid their credit card bills with those same funds. For many customers, a stop at their local American Express office became a weekly habit.

You have to admit that it was a great deal — you circulate your own money between your bank and credit card accounts, and in a few months, you get a free plane ticket or hotel stay. As you may have noticed, I’ve been using past tense, and with good reason. On Nov. 6, American Express sent a memo to all its offices instructing them to stop selling traveler’s checks to customers with co-brand cards.

The company never intended for this to become a points gold mine. In fact, no points should have been awarded for those purchases, said Desiree Fish, vice president for public affairs. “Those have been our terms and conditions for years, and we seek to enforce them,” she said, but she added that no points will be taken away retroactively. “We may reinstate the program in the future, but customers will not be able to earn points.”

Some of those who benefited from the unintended deal are angry at American Express for ending it, but most are understanding and happy about all the points they earned.

“Although I’m sad to see this point opportunity end, I don’t blame Amex at all,” said Bob from Long Island, N.Y., who asked that his last name not be used for fear of retribution. “It certainly makes sense to allow cardholders to buy traveler’s checks if they actually need them, but to give away points at a loss makes no business sense.”

“Amex discovered the loophole and plugged it,” he said. “That’s life. Move on to the next deal.”

If you thought those who visited an American Express office every week went too far in pursuit of points, you probably will find the next deal some people have moved to even more peculiar.

In the summer, the U.S. Mint announced a “circulating $1 coin direct ship program,” making it “easy for retailers, financial institutions and other interested parties to obtain smaller quantities of $1 coins than can otherwise be obtained from the Federal Reserve.”

“The coins will arrive in boxes of 25-coin rolls within about two weeks, and the United States Mint will pay the standard shipping and handling costs,” the agency said in a statement.

The free shipping and the credit card payment option caught the attention of point seekers. They realized that in order to earn enough points to make it worth the effort, they would have to order quite a few boxes, and because they wouldn’t be able to spend the coins, they would have to deposit them in the bank. As odd as that may sound to most of us, there are reports on the Internet from people who did that. Bank tellers thought it was amazing, but they took the money.

Bob from Long Island says he has no interest in that “deal,” but he doesn’t underestimate the value of the 4 million points he has earned in the past 20 years. “I keep an Excel sheet tracking the estimated value of redemptions, which total around $120,000 to date,” he said. “Not bad for something many people dismiss as a gimmick or a waste of time.”