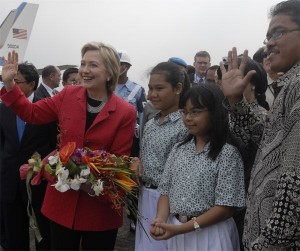 BEIJING — So much for the “diplo-speak” U.S. officials usually offer on trips abroad.

Newly minted Secretary of State Hillary Rodham Clinton showed last week that she will not be constrained by diplomatic protocol or follow an official script and, so far, she seems to have the stature and celebrity to pull it off.

On her way to Seoul on Thursday, for example, Mrs. Clinton spoke candidly and extensively about a possible power struggle in North Korea. She was broaching an issue that has occupied intelligence officials and diplomats ever since the country’s dictator, Kim Jong-il, was reported to have suffered a stroke last summer.

Her remarks immediately made headlines, mainly because the subject is rarely discussed publicly by senior officials. But she told reporters a day later that she could not understand what the fuss was about since she was simply stating the obvious. She did not appear to be concerned about angering the North or irritating its close ally, China.

“I don’t think that it’s a forbidden subject to talk about succession in the Hermit Kingdom,” she said. “In fact, it seems to me it’s got to be factored into any policy review that one is undertaking.”

Just before going to Beijing on Friday, Mrs. Clinton infuriated human rights advocates by saying she would not let thorny issues such as human rights and Tibet prevent the United States and China from making progress on climate change, security and economic matters.

Even though previous administrations did not admit it publicly, in practice they adopted a similar approach.

“Maybe this is unusual, because you are supposed to be so careful that you spend hours avoiding stating the obvious, but you know, that’s just not productive, in my view,” the secretary told reporters traveling with her.

“It’s worth being perhaps more straightforward and trying to engage other countries on the basis of the reality that exists in a number of these settings,” she said. “That’s how I see it, and that’s how I intend to operate.”

Analysts and other observers said such remarks are refreshing and note that Mrs. Clinton, as a former senator, may be impatient with diplomatic talking points. But they wonder how long she can continue without worrying about the consequences of her words.

“Clinton’s comments most likely suggest a more open approach to U.S. diplomacy than occurred with the previous administration, where secrecy reigned supreme,” said Patricia Kushlis, a retired career diplomat who writes a foreign-affairs blog called “Whirled View.” “What difference, if any, a more open approach will make in terms of outcomes is premature to say.”

Mrs. Clinton’s approach of speaking her mind, rather than following a script, could present a challenge for the State Department bureaucracy, where every public statement must be cleared by several offices, and where even a minor policy change can take months to become official.

Her two immediate predecessors, Condoleezza Rice and Colin L. Powell, for the most part stuck to the script that had been prepared by the bureaucracy under their direction. Ms. Rice was particularly disciplined, officials said, which was always welcomed by her aides.

Attempts to rein in Mrs. Clinton last week proved futile. She usually answered questions at press events without the help of notes. But a day after her North Korean succession comments, she read from a previously scripted statement when responding to a question during a press conference with South Korean Foreign Minister Yu Myung-hwan in Seoul, apparently to make sure she did not stray from State Department orthodoxy.

A few hours later, however, she did just that, telling reporters at a round-table discussion that she should not be expected to keep quiet just because some may consider an issue to be taboo. “To worry about something which is so self-evident is an impediment to clear thinking,” she said in reference to the North Korean succession.

Mrs. Clinton’s style is perhaps closest to that of Madeleine K. Albright, the first female secretary of state and a close friend of Mrs. Clinton’s. The former first lady is said to have lobbied her husband, former President Bill Clinton, to appoint Mrs. Albright as his chief diplomat in 1996. Mrs. Albright was known for straight talk and colloquial quips, as when she explained differing policies toward different countries with respect to economic sanctions as “different strokes for different folks.”

Another similarity between the two women is their interest in holding numerous public events in the countries they visit, beyond meetings with top government leaders. Although both Mr. Powell and Ms. Rice did some of that, they often limited their activities, which allowed them to visit two or three countries in one day.

One thing Mrs. Clinton has in common with Mr. Powell is the celebrity factor, although she is an even bigger star overseas than the retired general. The rapturous welcome she received during her Asia tour was a novelty for both State Department staffers and the press corps on the trip, who found themselves listening to the secretary talk about love before a live audience of 2,000 and millions more on South Korean television.

“How does anybody know about love? If you can describe it, you may not fully be experiencing it,” she mused when a student at Seoul’s Ewha University asked how she knew she loved Mr. Clinton.

All but one question during the hour-long town-hall meeting at the world’s largest women’s university were personal, having to do with her upbringing, family and career. “I feel more like an advice columnist than a secretary of state,” she said at one point.

Many of the questions at Ewha on Friday and during a town hall at the University of Tokyo on Tuesday began with such compliments as “You look stunning today” and “It’s glorious to meet you.” One questioner in Tokyo could hardly speak, breathing heavily from the excitement of meeting Mrs. Clinton.

She said she plans to “repair relations” with foreign countries in part by using her — and her boss’s — ability to excite people and interest them in worthy causes.

“President Obama has an extraordinary capacity to do that because of the really positive feelings that he personally engenders,” she said. “To a lesser degree, I have some of the same capacity.”