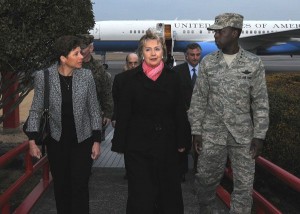 Secretary of State Hillary Clinton at the Yokota Air Base in Japan.

It’s what Mrs. Albright’s former chief of staff, Elaine Shocas, used to call the “fire in the belly.”

Being the U.S. secretary of state is not only one of the most challenging and powerful jobs on the planet — it’s also one of the most exciting. You probably know people who want to change the world — or perhaps you are one of them. This job actually offers many opportunities to do that.

Wouldn’t you be thrilled if your arrival in every country were front-page news and TV cameras at the airport waited for you to come down those stairs? Wouldn’t you get motivated if foreign governments and citizens closely followed almost every word you uttered in public?

By the end of a trip, the secretary usually looks less tired than most of his or her traveling party. That was certainly true during our 19-hour journey from Beijing back to Washington on Feb. 22. I realize it takes less time to fly between the two cities, but read on to find out why it took us that long.

At the end of last week’s column, we were still in Tokyo, the first stop on Mrs. Clinton’s maiden voyage as the nation’s chief diplomat. After two days there, we flew to Jakarta, the Indonesian capital, which happens to be just south of the equator — a guarantee of heat and humidity all year round. On the tarmac, Mrs. Clinton was greeted by a children’s choir from the elementary school President Obama went to in the late 1960s.

About 24 hours later, we were back on the plane for a seven-hour flight to Seoul. That’s how long it took to go from a temperature of 80 degrees to 20. Talk about climate change. The Seoul Air Base, where we landed, is much closer to the city than its two commercial airports, Incheon and Gimpo, which is important to us when we have stories to file and need to get to the hotel quickly.

The next day, it was on to Beijing and a short two-hour flight. Another question I’m often asked about these trips is whether we have time to see the places we go to. The answer in most cases is no. This was my seventh time in Beijing, and except for an hour I managed to steal during a visit with Mr. Powell in 2003 to see Tiananmen Square and the Forbidden City, I haven’t really done any sightseeing.

In fact, we hardly had time to sleep on this trip. It wasn’t enough that Mrs. Clinton’s schedule was packed, but the huge time difference with Washington — between 12 and 14 hours, depending on the country — made it even more difficult to go to bed before early morning because of our filing deadlines.

That was particularly challenging for TV correspondents, who had to broadcast live in the middle of the night. Andrea Mitchell of NBC News, for example, did five reports for the “Today” show, four for “Nightly News,” hosted her own hourlong show on MSNBC five times and also reported for CNBC. Ms. Mitchell got an average of an hour or two hours of sleep a day, as did her producer, Libby Leist, who flew commercially to three of the four stops on the trip.

Ms. Mitchell, who had a broken ankle and was wearing a walking boot, surprised some Chinese officials when she sat on the red carpet in the Great Hall of the People in Beijing to take notes at the beginning of Mrs. Clinton’s meetings with President Hu Jintao and Prime Minister Wen Jiabao.

Remember those middle seats on the plane I mentioned last week? James Rosen of Fox News, who sat in one of them, brought up the subject during his on-camera interview with Mrs. Clinton, asking whether she was “making any headway” in securing a better seat for him.

“You all decided on a lottery system,” she said, playing along with the humorous line of questioning. “I believe in empowering people to make their own decisions. That’s part of smart power, and so we gave you all the opportunity, and you drew the middle seat.”

As for the 19-hour journey home, it took that long because we made two refueling stops — one at Yokota Air Base in Japan, where Mrs. Clinton warmed up a crowd of hundreds of U.S. servicemen and women stationed there, and another one at Elmendorf Air Force Base in Alaska, as we had done on the way to Asia at the beginning of the trip.