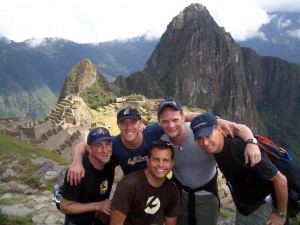 Zoom Vacations co-owner Bryan Herb (second from left) with a group of travelers during a trip to Peru.

The travel industry seems to be engaged in a curious courtship. Its targets are gay travelers. During a recession, they apparently are the one group that doesn’t change leisure habits too much, so airlines, hotels and tour operators are trying to win their business.

Courting gay customers is nothing new, of course. A few years ago, the creators of the popular Showtime series “Queer as Folk,” Ron Cowen and Daniel Lipman, told me that, during their research for an episode, they had discovered that gay Americans had hundreds of billions of dollars of disposable income.

So the fight for shares of that income has been going on for a while — many airlines and booking engines have created dedicated pages on their Web sites for gay travel — but when times get tough and one of the first pleasures most people sacrifice is travel, gays and lesbians get even more attention from the industry.

Last month, the Massachusetts Office of Travel and Tourism started a “microsite dedicated to attracting gay, lesbian, bisexual and transgender leisure travelers.” It cited data from a San Francisco market research firm, Community Marketing, estimating that those consumers spend about $70 billion on travel in the United States annually.

Even as some gay-owned businesses, such as bookstores and clubs, are being forced to shut down, travel companies are seeing little impact from the economic crisis, said Bryan Herb, chairman of the International Gay and Lesbian Travel Association.

“The gay travel market is not affected that much. We are counting our blessings. I’ve never worked harder, but that’s OK,” said Mr. Herb, who co-owns Zoom Vacations, a company that organizes group and individual trips for gay travelers, as well as events, in countries around the world. “You wouldn’t have known there was a recession if you’d seen how my travelers were shopping in Buenos Aires last month.”

Zoom Vacations’ bookings are about the same as last year’s, and Mr. Herb said he hasn’t noticed any less interest in the company’s offerings. It does about 16 group trips a year, with about 20 people each. The cheapest one costs about $1,500 — to Puerto Rico — and the most expensive about $7,500 — to India — excluding airfare. The packages include accommodation at “ultra-luxury” hotels, most meals and various events, such as beach parties, elephant-back riding and safari outings.

Mr. Herb attributed gay travelers’ continued interest in those trips mainly to “cultural” reasons. Even those with limited financial resources often choose travel before other similar activities, he said.

“Travel is so much a part of our culture,” he said. “When it was announced that we are in a recession, fewer people were calling us, but two weeks later, things picked up again. Many people don’t really know yet how the recession will affect them.”

Some of Mr. Herb’s company’s most popular trips, which have become traditions since its founding in 2002, are New Year’s Eve in Rio de Janeiro and Gay and Lesbian Mardi Gras in Sydney.

The festivities in Sydney attract visitors from around the world. This year’s event, which took place last week, brought together more than 300,000 people, and 9,500 of them participated in the elaborate parade, according to press reports. The “chief of parade” was Australian Olympic gold-medal diver Matthew Mitcham, who was celebrated for coming out publicly as one of the very few openly gay men in sports.

For those U.S. participants who want to start the party early, Air New Zealand began a “pink flight” from San Francisco to Sydney last year, with a connection at the carrier’s main hub in Auckland, the country’s largest city.

The first flight had a full entertainment program, which started at the gate in San Francisco and continued with music, games and gay-themed movies on board. The flight “hostess” was comedienne Kathy Griffin, who filmed the affair for her reality show on the Bravo cable channel, “My Life on the D-list.”

This year, the airline decided to leave the passengers on the 13-hour flight some time for rest, so it trimmed the entertainment part. Once at the Auckland airport, “pink fliers” were ushered to a “glamor gate,” which featured custom-made chandeliers and a champagne bar, Reuters news agency reported.