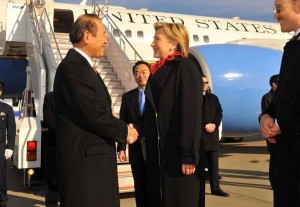 Now I’ve found an excuse. There is a new secretary — Hillary Rodham Clinton no less — and she has just completed her first overseas trip since taking office. So it’s time to step back from what has become a routine for us in the press corps and try to look at it through a fresh pair of eyes.

The State Department usually gives us 13 seats on the secretary’s plane, but this time we got three more, to accommodate the bigger interest in Mrs. Clinton’s maiden voyage to Asia.

As usual, the days before the trip were occupied with filling out visa forms for the countries on the itinerary — Japan, Indonesia, South Korea and China. Two days before departure, we were given a notional schedule for the trip, a weather advisory for the stops, and a staff and guest memo explaining the basic procedures of official travel.

On the day of departure, Feb. 15, staff and press gathered at the State Department for the ride to Andrews Air Force Base outside Washington.

We spent about 50 minutes in the terminal’s so-called VIP lounge, while our luggage was being swept and loaded on the plane. The staff there usually has coffee and cookies. I always recommend to new travelers to eat whenever and whatever they can on those trips because one never knows when the next meal will be. Even if there is a scheduled service on the plane, its timing depends on when the secretary decides to hold a press briefing.

In the lounge, the traveling press, as we are known, engages in a ritual the rest of the passengers are lucky enough to avoid — drawing numbers for seat assignments.

The secretary of state, along with the vice president, the first lady, key members of Congress and sometimes the president, flies on a C-32 aircraft — an Air Force version of Boeing 757 for civilian use. When the small fleet of those planes was delivered a decade ago, all passenger seats were the same. They were in a 2-2 configuration, with a single aisle, and resembled most domestic first-class seats on commercial airlines.

After Sept. 11, 2001, the Bush administration decided to install additional communications technology on board, which required more space. In order to preserve the number of seats, they replaced the last two rows with coach seats, in a 3-3 configuration.

The victims of that change were, of course, reporters. The prospect of writing stories in a middle seat and spending sometimes 15 hours a day crammed, after having had hardly any sleep on the ground because of a busy schedule, would depress anyone. We still get a few big seats, which is why we draw numbers.

We boarded the white-and-blue plane half an hour before departure and waited for Mrs. Clinton to arrive. When she did, she walked back to say hi and meet those in the group she hadn’t met before, and then retired to her private cabin.

She decided to brief toward the end of the first leg, so the meal service began about an hour after takeoff. The crew doesn’t use carts, but meals are still served on trays. They offered a small green salad, pasta with meatballs and a chocolate mouse.

As for entertainment, there are small screens for every two rows on either side of the aisle. For some reason, they played “Juno,” a more-than-a-year-old movie we had seen on a trip with Mrs. Clinton’s predecessor, Condoleezza Rice, back in March.

We were headed to Tokyo that day, but we had to make a refueling stop in Alaska. At Elmendorf Air Force Base outside Anchorage, we filed the stories we had written after Mrs. Clinton’s briefing a couple of hours earlier.

On the next leg, after dining on chicken breast and chocolate cake, we tried to get some sleep, but it wasn’t easy in those seats. After a turbulent descent, we landed at Tokyo’s Haneda Airport, which is much closer to the city than the better-known and larger Narita, in early evening.

Mrs. Clinton was greeted by athletes, coaches and managers from Japan’s Special Olympics team, who had just returned from a competition in Idaho.

Over the next several days, she received a celebrity welcome everywhere she went, drawing large crowds both at scheduled events and along the streets of her motorcade. She kept a very busy schedule, and that kept us and the staff up most of the nights.