HomeMyths vs. realities of celebrity travel 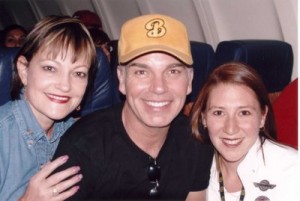 Who is the biggest celebrity you’ve seen on a plane, at an airport or in a hotel? Did they draw attention to themselves or quietly mind their business? Whatever happened, you probably told stories about it.

As we were reminded last week, the only celebrity travel tales commanding media interest tend to be those that involve making a scene. Actress Lindsay Lohan, the Fox News Web site reported, did just that at the Tampa, Fla., airport Jan. 31, when she was told that there were no first-class seats left on her Delta Airlines flight.

“You’d better come and visit me back [in coach] in case I die,” she was quoted as telling a friend traveling with her who had secured a seat upfront. She was described as acting “incredibly entitled and embarrassed,” which apparently paid off in the end, because she got her wish.

It’s easy enough to document such incidents with cell-phone cameras these days, and so is posting them instantly on the Internet. Although it’s common for celebrities to expect special treatment, most of them have their staff make the necessary arrangements quietly in advance. By the time you see them on a plane, they usually have no reason to make a scene.

In fact, it’s always exciting for both passengers and employees to see a famous person on their flight.

“One of the fun things about being a flight attendant is all of the celebrities – actors, musicians, sports stars and even presidents — that we get to see,” James Malone of Southwest Airlines wrote on the company’s official blog.

“Oftentimes, they are quiet and seem to want to be left alone to their reading, catching up on sleep, etc., but other times, they are more than willing to answer questions from our customers and flight attendants, and more often than not, they let us take pictures with them,” he said.

Mr. Malone posted photos taken on Southwest flights with actors Billy Bob Thornton, Jason Alexander and John Stamos, as well as with former President Jimmy Carter. None of them was apparently bothered by the lack of first class on the low-cost carrier’s planes.

Former presidents are especially popular with travelers. George H.W. Bush and wife Barbara are frequent passengers on Continental Airlines, most often on flights to and from Houston, where they made their home after leaving the White House in 1993. The city’s main airport — Continental’s largest hub — is named after Mr. Bush.

Even though the Bushes have been seen in coach cabins, sitting in first or business class is a major requirement for celebrities. A famous Hollywood actress once told me how horrified she was when she went back to talk to her assistant in economy a few years ago and saw the passengers packed “like sardines.”

The wealthier and prouder celebrities usually buy first-class tickets — actually, the richest have their own planes — while others have their publicists or managers lobby the airlines for upgrades. Comfort and pampering is just as important to them as the symbolism of sitting upfront.

It was no coincidence that United Airlines introduced its so-called “premium service” in 2004 only on flights from New York to Los Angeles and San Francisco. The carrier reconfigured 13 of its Boeing 757 aircraft so it could offer three-cabin service. The seats in business class are much better than those in regular domestic first class, and the new first class has lie-flat beds. Despite recent cutbacks, the meal service and entertainment are also in a different league compared with other domestic flights.

Entertainers — some of the most frequent passengers on those flights — have talked about their experiences with the unique product on TV talk shows. At New York’s John F. Kennedy International Airport last month, I had a brief chat with Sigourney Weaver, who was flying to Los Angeles for the Golden Globe awards.

Sometimes celebrities and their travel companions can cost elite passengers coveted upgrades. Scott Schneider of Basking Ridge, N.J., said he might have sat in first class on a recent Continental flight to Florida had it not been for former New York City Mayor Rudolph W. Giuliani and his “small entourage.”

On the plus side, Mr. Schneider said, his plane was cleared for takeoff much faster than usual.

“Once in the air, the flight was entirely ordinary, and although a good number of the passengers knew Mr. Giuliani was on board, they generally acted as if no one special was flying with us,” he said. “I certainly would have liked to meet Mr. Giuliani, but as a platinum elite, I knew to respect the sanctity of the first-class cabin. By the time I deplaned, he was gone.”