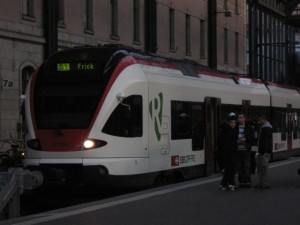 Since flying became the main form of long-distance transportation in the United States in the past couple of decades, repeated warnings by railroad executives and industry advocates that insufficient funding and out-of-date equipment would lead to the system’s collapse seemed to fall on deaf ears.

Now the symbolism of Mr. Obama’s brief journey from Philadelphia is giving new hopes to the industry, which already has labeled both him and his vice president, Joseph R. Biden Jr., “pro-rail.” In fact, Mr. Obama plans to stop in Wilmington, Del., to pick up Mr. Biden on Jan. 17 for their inauguration three days later. Mr. Biden has been taking the train to Washington every day since he became a senator in 1972.

Industry advocates also have been pushing for “infrastructure and passenger train investments for the second economic stimulus package.”

“In a fragile economy, it is essential to have affordable mobility,” Ross B. Capon, president of the National Association of Railroad Passengers, wrote in a letter to Congress in November. “Travel stimulates the economy. If Americans can’t travel by other means, they will stay at home and not spend money on travel and at destinations, further depressing recovery efforts.”

Being an avid flier, I’ve rarely taken the train in the past several years, even in the so-called Northeast Corridor, which includes Washington, New York and Boston. I made a few train trips to New York soon after Sept. 11, 2001, when the new security measures at airports extended the time needed for air travel. But with online check-in, priority security lines and fares that are often still cheaper, flying seems to be winning out.

Last week, however, while traveling in Switzerland, I was reminded how efficient and pleasant riding the rail can be.

One could argue that Switzerland needed to develop a good train network because it’s a small country with few commercial domestic flights — they are usually feeders for longer international flights — and where many people don’t own cars. Still, the Swiss railroad system has become one of the best in the world and could prove an attractive example for other countries.

Swiss trains are clean, comfortable and punctual. There are direct services between all major cities at least once an hour, but if you have to make a connection, chances are you won’t have to wait longer than 10 minutes. Although by no means cheap, travel by train is affordable because of special discount cards and passes, many of which are good for a year, said Majka Wurtlin, a front-desk supervisor at the Hilton hotel in the northwestern Swiss city of Basel, who has ridden trains all over the world, including in the United States.

“Americans should use trains more,” she said. “I traveled from Seattle to San Francisco by train in 2004, during a yearlong around-the-world trip, and it wasn’t bad at all. But I chose the bus from Miami to Las Vegas because it would have been too inconvenient and expensive by train.”

One of the Swiss rail passes allows for unlimited travel not only on trains across the country, but also on most boats, buses and trams for less than $3,000 a year. Another one entitles you to half-price on all tickets for about $140 a year. There are also commuter and family passes, inter-regional season tickets and cards for students and seniors.

Amtrak offers multi-ride commuter tickets, too, but only for specific routes. The price depends on the distance. A monthly pass between Washington and New York, about the same distance as between Zurich and Geneva, costs about $1,800. A monthly pass anywhere in the U.S. limited to 12 rides is about $580. Amtrak says that it’s “an excellent way to see the country,” but it’s “not intended for use as a commuting pass.”

Perhaps the new — and any future — funding for Amtrak will bring more affordable prices.