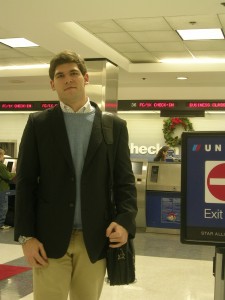 Most citizens of the 34 countries participating in the so-called visa-waiver program think that all they need to board a plane to the United States is a passport and an airline ticket. For the most part, they are right. But what kind of passport and ticket?

If your passport was issued before Oct. 26, 2005, it must be machine-readable, with a strip at the bottom of the title page that can be read by a computer when swiped. If the issue date is after the above-mentioned but before Oct. 25, 2006, you need either a digital photograph or a chip containing information from the data page. Passports issued later must have both a photograph and a chip.

There are also ticketing requirements. As well as a flight to the United States, you must show proof that you have booked an onward ticket within 90 days to another country, but it can’t be Canada, Mexico or a country in or bordering the Caribbean.

Most travelers fail to see the importance of that rule, because they assume that everyone buys round-trip tickets. However, there are many people who visit the United States frequently on business or for family reasons and purchase one-way tickets because they don’t know their return date. Others choose round trips originating in the United States because that may be cheaper or their stay in the country may be longer than their time away.

Sebastian Poggel, a travel strategy consultant with a German passport, is one of those business people. He has flown to the U.S. without a visa or a return ticket to Europe repeatedly in the past few years without a problem — until last month, when he was refused a boarding pass for a flight from Frankfurt to San Francisco.

Although Mr. Poggel said he had booked a flight to Vancouver the next day, the airport agents knew that a ticket to Canada doesn’t meet the requirement. However, they apparently didn’t know there is an exception to the rule, which applies if the “passenger holds proof of residence” in Canada.

“I told them twice I don’t need a return to Europe because I have a respective visa for Canada, but they didn’t care,” he said. “They made me purchase a ticket.”

As a savvy traveler, he was well aware of the 24-hour grace period most airlines allow for a ticket to be canceled and refunded with no penalty, so he did just that as soon as he landed in California. Had he printed out the entry requirements with the exception for Canadian visa holders, however, the agents most likely would have relented, and he would have saved the $55 nonrefundable ticketing fee he paid in Frankfurt.

Anyone can find the entry requirements for any country on the Web site of the International Air Transport Association, as well as links to it on most airline sites. “People should have them ready, whether it helps or not,” Mr. Poggel said.

A new U.S. requirement for all travelers eligible for a visa waiver goes into effect Jan. 12. Before departure, they must visit the Web site of the Electronic System for Travel Authorization (ESTA) and fill out an application form.

The program has been running since August, and more than 600,000 travelers — or up to 12,000 a day — have made use of it, said Amy Kudwa, spokeswoman for the Department of Homeland Security (DHS), which administers ESTA.

Participation by citizens of longtime visa-waiver countries from Western Europe, as well as Japan, Australia and Singapore, among others, has so far been voluntary. But it has been mandatory for passengers from seven new countries in Central and Eastern Europe and South Korea since they joined the visa-free program last month.

Ms. Kudwa said that DHS has been doing “robust outreach” both with airlines and the publics in visa-waiver countries to make sure that no travelers are denied boarding because they lack ESTA approval. Although the authorization makes you eligible to travel to the United States , it doesn’t guarantee admission in the country. If you are not approved, you must apply for a visa at a U.S. embassy or consulate.

“Most applicants get approved in less than a minute, but we recommend submitting the online form three days in advance just in case,” Ms. Kudwa said. “You don’t need to have a trip planned to apply, and once you get an authorization number, it’s valid for two years, provided you don’t change your passport.”