HomeWhat to do with empty premium seats? 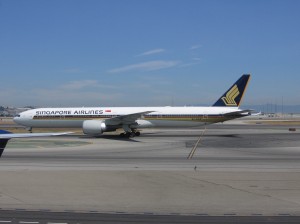 A Singapore Airlines Boeing 777 at the San Francisco International Airport.

Have you flown in business or first class lately? How many empty seats did you count? With so-called premium traffic falling faster that airlines can cut capacity, what should they do with the growing number of unsold seats?

Should they drastically lower the high prices they charge for them? Should they open up more seats for mileage redemption? Or should they offer free upgrades to their most loyal customers?

First and business-class fares have come down somewhat, but a wide dramatic decrease is yet to be seen. Many carriers have spent hundreds of millions of dollars in recent years to install expensive lie-flat seats and entertainment systems, so they rightly want a return on those investments. At the same time, isn’t charging $3,000 instead of $8,000 for a seat better than having that seat remain empty?

Increasing the number of seats that can be booked with frequent-flier miles is an obvious choice for passengers, but most airlines not surprisingly disagree, particularly when it comes to long-haul flights. Although some foreign carriers have been showing improved availability, their U.S. counterparts still hope to sell their premium seats for cash and don’t release them for “awards” until a day or two before departure.

Free upgrades for their best customers seem to be the solution for the major U.S. carriers. American Airlines and United Airlines have probably the most sophisticated systems of earning and redeeming several types of upgrades for domestic and international flights. The so-called operational upgrades are widespread in the U.S. industry, because carriers heavily oversell their coach cabins and need to move passengers upfront for free when there is space.

For the world’s best airlines, however, none of these three options is acceptable — at least for the time being. Singapore Airlines and Hong Kong’s Cathay Pacific Airways often top various rankings and pride themselves on being luxury carriers. They have long been considered industry leaders in premium products and services, and traditionally high demand — until recently — has translated into intolerance for free upgrades.

“We believe that there is a solid and profitable place for premium service even in an economic downturn,” said Singapore spokesman James Boyd.

The carrier’s newest 180-degree flat business-class seats are the most spacious in the world, but they also cost more. If you want to redeem Singapore miles for them, you’ll need many more miles than usual — and if you want to use miles from a partner program in the global Star Alliance, the new seats are completely off limits. That policy has angered many customers, because on most long-haul flights, those fancy seats are the only option.

What has outraged customers who pay cash to fly in business class is Singapore’s levying additional charges for the new seats of up to $900 per flight on round-the-world and other fix-priced tickets. Some frequent fliers also suspect that the airline had something to do with the Star Alliance’s recent huge increase of the base fares — a decision that puzzled many, given the current conditions.

“I, for one, try to avoid Singapore Airlines as much as I possibly can — not only on round-the-world tickets, which I use quite frequently, but also on simple return tickets or even awards. That’s simply due to the fact that I don’t agree with their surcharge policy,” said Thomas Kubik, a business traveler from the Austrian city of Salzburg.

“They lost quite a bit of revenue they could have earned from me over the last couple of years, and I know some fellow travelers who handle it exactly the same way,” he said. “There are many more like me out there, but I doubt it will be enough to force them to lower the charges.”

Mr. Boyd defended Singapore’s policies, saying the carrier’s “product is at a level to justify” the high charges. But can the airline sustain those policies? It has already announced plans to cut 11 percent of its overall capacity, and it has reduced its daily all-business-class flights between Singapore and Los Angeles and Newark, N.J., to five weekly.

“What started as a financial crisis in the Western economies has now become a manufacturing crisis, hitting the export-dependent economies of Asia hardest,” said IATA, which represents about 230 carriers.