Rebook flights at no cost

HomeRebook flights at no cost 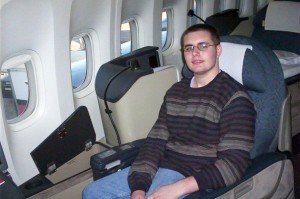 Are you planning to postpone a trip you’ve booked to Mexico because of the swine flu? By now, you’ve probably heard about airlines waiving fees to change your flight. But do you know how to rebook a flight to make sure you avoid any extra costs?

The waivers issued last week, as the State Department advised Americans to delay travel to Mexico if possible, are not much different from waivers related to bad weather and published regularly throughout the year.

They usually allow passengers who have already begun their journey to reschedule their return — and fly back home later, until a storm passes, or earlier, if you happen to be in Mexico right now — without having to pay the normal reissue fee, which is $150 for domestic itineraries and up to several hundred dollars for international flights.

If you haven’t started your trip yet, you have three options.

First, you can go ahead with your plans, and if your flight is canceled, your airline will try to accommodate you on another nonstop or connecting flight where possible. Just make sure to check the carrier’s flight status before you leave for the airport — or, better yet, sign up for automatic e-mail schedule updates.

Second, you can cancel your trip. If you bought a full-fare ticket, you’ll get a full refund to your credit card. Even if your fare is nonrefundable, some carriers, such as United Airlines, will still refund your money, but only if your original flight was canceled.

In the more likely event that your ticket is nonrefundable, you can use the entire amount you paid toward the purchase of a new ticket, up until a year from the date the original ticket was issued. That’s what D.C. resident Michelle Jeffress did last week. She had planned a honeymoon in Mexico this month but canceled her United ticket for credit and booked a new ticket to the Dominican Republic on American Airlines.

Third, you can reschedule your trip. This is the option that seems much easier than it really is, especially if you want to avoid paying extra — and that’s not guaranteed by the waiver, which only covers the administrative reissue fee. All airlines require that the new flights you book have availability in the same booking class as your original ticket.

Booking class does not mean class of service. Within the economy service class, there are about a dozen different booking classes, or codes, symbolized by letters. United’s lowest booking code, for example, is L. So if you are booked in L but the lowest class available on your new flight has another letter, your ticket has to be repriced in the higher class.

Some airlines are more flexible with that rule than others, depending on the availability of alternative routes, a passenger’s elite status — or simply on the agent who answered your call. If you are not satisfied with the options being offered to you, call back or ask for a supervisor with more authority to accommodate you.

“While United has always worked with me to find an acceptable solution, every carrier is different, and I’ve encountered less flexibility at times from other carriers,” said Chris Hanna, a frequent flier from the San Francisco area.

United spokeswoman Robin Urbanski said the airline “will rebook in any class for customers who have already begun their travels.”

Delta Airlines spokeswoman Susan Elliott said the carrier “will be sticking to the booking class rule.” So will American, said spokesman Tim Smith, although he added that, “as a broad philosophy, we try to be as flexible as we can and to try and assist” customers.

Ben Fried of Potomac, Md., said the easiest way to rebook a flight for no additional charge is at the airport, where agents are given more authority and can often put you on a flight as long as it has an available seat, regardless of the booking class.

When airlines issued the Mexico waivers last week, some, such as US Airways, limited the allowed re-booking period to two weeks from the original travel date. That changed when they realized that the flu would be around for a while.

“Our customers may move their travel dates one time past their original booking date, but they need to do it before they were originally scheduled to travel,” said spokeswoman Michelle Mohr. “If I was supposed to travel Saturday, but decided to move my flight to July, I have to call before Saturday to do so.”