Giving the bus another chance

HomeGiving the bus another chance 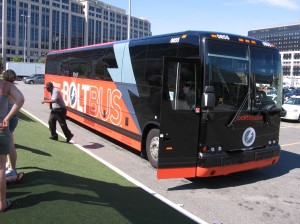 BoltBus is a division of Greyhound Lines, Inc.

When was the last time you took a bus instead of a plane or train? Until a week ago, it had been 12 years for me. I didn’t have fond memories from back then, so I reluctantly decided to give the bus another chance with a weekend trip to New York, and I’ll happily do it again.

There are at least three reasons why I avoided hopping back on a long-distance bus all those years: It’s slower than a plane, less comfortable than a train, and ground transportation doesn’t really excite me.

The only advantage has always been the lower cost, but that wasn’t enough to entice me because if I planned well in advance, I could get a plane or train round-trip ticket from Washington to New York for $120. Even the additional airport-security measures after Sept. 11, 2001, failed to change my mind.

My most recent trip, however, was a different story. I had only three days to plan it, and by then, the cheapest alternative — Amtrak — would have cost me at least five times more. I’ve never associated buses with comfort, but I’d heard from quite a few people about recent improvements bus companies had made, including new seats, power outlets on board and even free wireless Internet service.

Several weeks before my trip, I’d received an e-mail from Matthew Keller, a software engineer in Washington who had just created a Web site called BusJunction, which he described as the first one-stop shop for bus tickets online. He takes the bus frequently to visit his girlfriend in Boston.

“Since there are so many different Chinatown bus companies, and they all have different schedules and Web sites, it’s a pain to find the right ticket,” he said. “About six months ago, I started working on this Web site with a couple of friends to try to aggregate that information for people so they could find the ticket that they needed more quickly.”

The search for my outbound trip produced more than 60 departures by seven companies. In addition to the familiar Greyhound and Peter Pan, there were DC2NY, Vamoose Bus, BoltBus, Megabus and TripperBus. The last three offer both free Wi-Fi and power outlets. DC2NY has Wi-Fi but is still working on installing outlets, which should be done by the end of June, according to its site.

Prices range from $15 to $28 each way, depending on departure time, location and passenger loads. I kept an eye on ticket sales until the night before I left, and most rides were sold out. All companies budget 4½ hours for the journey, but unless you get stuck in traffic, it usually takes four hours.

I chose BoltBus for a combination of reasons, but mainly because it was recommended by a friend. Buying the $24 ticket on its site was easy enough, although BoltBus has one disadvantage to other companies — it doesn’t allow changes to tickets after they are issued.

I arrived at the departure location at 10th and H streets Northwest 10 minutes before the scheduled time and was surprised to see that most seats were already taken. A couple of standby passengers got the last remaining seats.

Just before the driver closed the door, however, a woman with a confirmed seat showed up. He didn’t think twice before turning her back, which struck me as unfair, given that she had a ticket, unlike the person who ended up in her seat. So I checked the BoltBus site, and here’s what it said:

“Five minutes prior to departure, we reserve the right to release your reservation if you have not boarded and claimed your seat. We will then make all seats available to walk-up customers.”

The ride wasn’t bad at all. The power and Wi-Fi worked, and Internet access and a DVD are enough to occupy me for four hours despite the slight inconvenience of having a computer in my lap. The restroom was not only clean but bigger than most lavatories on commercial aircraft. The legroom was tolerable, although it might be less so on a longer ride.

The driver made no stops on our way to New York, but his colleague took a 10-minute break on my return. My only complaints were that it was too cold for most passengers during both rides, and the second driver talked too much.

I was surprised to see the Greyhound name painted on the bus. It turns out that BoltBus “is a division of Greyhound Lines Inc., operated in affiliation with Peter Pan Bus Lines,” according to Abby Wambaugh, a Greyhound spokeswoman. BoltBus carried almost 38,000 passengers in the New York-Washington corridor in May, she said.