Keeping track of your trips

HomeKeeping track of your trips 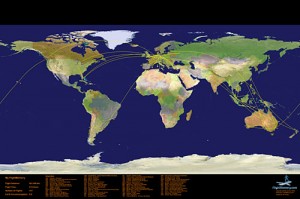 One of FlightMemory's personalized posters, showing all routes flown by a traveler.

How many miles have you flown over the years and how many hours have you spent in the air? What is your most-traveled route? How many times have you circled the Earth or flown the distance to the moon?

Flying today may not be as much fun as it used to be, but many travelers still find it fun to keep track of their flight history. Having such a log can also be practical, in case you need to remember when you were in a certain country, for example.

For years, my main frequent-flier account was my only reference to past trips. Airline alliances make it possible to post flights on several carriers to the same account, and being loyal to one alliance pays off in terms of achieving elite status.

I soon realized, however, that such accounts are not a reliable source of historical data. Most loyalty programs don’t post “award” flights, they keep the information on their Web sites only for a year or two, and sometimes you just have to fly on a carrier that doesn’t belong to any of the three global alliances — Oneworld, SkyTeam and the Star Alliance.

Although I didn’t look for an alternative way to keep a log, other travelers did — most commonly using Microsoft Word or Excel spreadsheets, which is what Benet J. Wilson, an editor for the Aviation Week Group in Washington, did for 10 years. Joel M. Chusid, general manager for North America at Hainan Airlines in Seattle, saved boarding passes in boxes for several decades.

“I didn’t know what I was going to do with them, but when FlightMemory.com came along, I was elated,” Mr. Chusid said.

The site he referred to started in April 2007 and allows fliers to save various data, including flight number, airline, date and time, origin and destination, class of service, aircraft type and seat number. In addition to keeping a log for you, which you can convert into an easy-to-print PDF file, the site produces maps showing the routes you’ve flown. It also generates different statistics — some of them standard, such as your most-frequented airline, airport and aircraft type and the number of times you’ve sat in first class, while others a bit more fun.

For example, I learned that I’ve circled the Earth 62 times and flown the distance to the moon six times. My longest and fastest flight was from Los Angeles to Singapore, and my shortest and slowest was from Damascus to Beirut, the capitals of Syria and Lebanon. The most northern airport I’ve visited is Rovaniemi, Finland, the most southern is Melbourne, Australia, the most eastern is Nadi, Fiji, and the most western is Honolulu.

Overall, I’ve flown 1.5 million miles, have been on 922 flights and spent more than 3,200 hours in the air. Mr. Chusid, however, beats me to the punch, although I’m much younger and can still catch up with him. With some of his flight data from those boxed boarding passes still to be entered, he has flown almost 4 million miles, more than 3,300 flights and over 9,200 hours.

Finding and logging the data is the most difficult and time-consuming part of this exercise. Mr. Chusid said some of his boarding passes were “handwritten, with seat numbers in crayon, or stamped manually” and may “require some detective work” to decipher.

FlightMemory was founded by two German friends, Samater Liban and Robert Heret, who first created a German version in late 2005. The site now boasts 72,500 total users in more than 180 countries, but almost 25,000 are in Germany and 20,000 in the United States. The site is free, but there is a $39 annual fee for a “premium service” that offers more detailed statistics.

A competing site that started more recently is OpenFlights.org.

Mr. Liban said that one of the promises he and Mr. Heret made to themselves and their subscribers at the very beginning was that personal data won’t be shared with third parties, even though that might bring significant revenue. The only type of information they might share is how many users flew on a certain airline during a certain period, Mr. Liban said.

“Our terms of service go way beyond what other sites offer in terms of privacy,” he said, adding that privacy rules in the European Union, to which the German-based FlightMemory adheres, are much stricter than those in the United States.

David Shafer of Lincoln City, Ore., said he keeps maps with his flights in his house on posters he bought from FlightMemory. Ms. Wilson, a relatively new user, said she plans to do the same at the end of the year. “I’m looking forward to publishing my 2009 flying to my fellow aviation geeks,” she said.