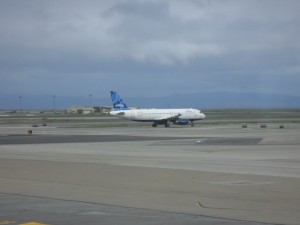 A JetBlue Airbus 320 at the San Francisco International Airport.

Bargain airfares have been abundant this year and rarely make news anymore, but it was fairly easy for JetBlue Airways to grab headlines last week with its very generous “all-you-can-jet pass.” The question is: Does this prepaid pass make sense for you?

If you have no plans or desire to travel between Sept. 8 and Oct. 8, you are not likely to benefit from the low-cost carrier’s offer. On the other hand, if you have several trips in mind — even if you’ve already bought tickets for some of them — the new $599 airpass can be your best friend for a month.

Although it went on sale Wednesday, demand has already exceeded JetBlue’s expectations, said spokesman Sebastian White. It must be purchased by Friday, but the airline reserves the right to end sales earlier if too many passes are issued. He declined to be more specific.

Except for its limited duration and its exclusion of the Labor Day weekend — the pass is not valid until the very next day — this is one of the most liberal passes offered by any airline in a long time. You can take as many flights as you want between any of JetBlue’s 56 destinations in 10 countries. You can add, change or cancel flights for free at least three days before each departure, although doing so after that deadline will cost you $100.

Unlike with promotional fares, there are no capacity controls in this case, and you can book a flight as long as there is an open seat on it. The $599 flat rate even includes all domestic taxes. International taxes, however, will be added depending on the countries you visit, and that includes Puerto Rico. You can only purchase a pass from a phone agent, but the regular $15 ticketing fee will be waived.

Usually, such offers are designed to generate new sales and can’t be applied to previously issued tickets. No such restrictions apply here. If you already have a ticket for a flight during the promotional period, you can “upgrade” it to a pass. If you paid less than the pass fare, that would only make sense if you plan on adding more flights, in which case you will pay the difference. If you paid more than the pass price, the difference will be given to you as credit to be used for a future trip within a year.

Although restrictions are minor compared to the pass’ advantages, it’s worth pointing them out. You can’t depart from the same city more than once on the same day. The pass is nonrefundable and nontransferable, and you may not be entitled to compensation in case you are denied boarding.

So if you travel at least once a week on business or commute for other reasons between cities served by JetBlue, the new airpass is a great bargain. Mr. White suggested that it can also benefit students, but Dan Webb, a travel blogger and student at Bryant University in Providence, R.I., said the beginning of the school year is not a good time to travel, even if the trip is to see family.

However, if you are retired or can spare a month, and if you always wanted to take a long trip and visit states and countries you’ve never been to but couldn’t afford it in the past, now may be your chance. Just don’t do it to boost your frequent-flier account — as with the fare, mileage credits for the pass are based on a flat rate rather than on actual miles flown.

Still, JetBlue impressed many industry watchers with the new pass. Similar prepaid products usually limit the number of flights or miles that can be flown and are much more expensive, although they are valid for longer periods.

American Airlines’ AAirpass allows passengers to fly 25,000 miles for $11,250 over one year. It offers more options than JetBlue’s pass because American flies to about 250 destinations worldwide, and “all the perks and flexibility that is built into the product make it easy for high-mileage travelers to use,” said spokesman Tim Smith. Those benefits include priority boarding and free business lounge access.

The last unlimited passes offered by the U.S. airline industry were those issued by American and United Airlines about a decade ago for lifetime travel in first class and cost $500,000, according to posts in online travel forums by people who purchased them.

So why is JetBlue offering the “all-you-can-jet pass” now?

“September is traditionally a slower month for the airline industry, with summer vacation over and kids headed back to school. Our pass is designed to spur a little more traffic during the rough period, but more importantly, it’s designed to create trial,” Mr. White said.

“While people who’ve never tried JetBlue generally have positive feelings about the airline, our research shows that once they actually jet with us, their perceptions of JetBlue skyrocket,” he said. “Once travelers try JetBlue, they will think twice about going back to other guy. That’s what this [pass] is designed to do.”