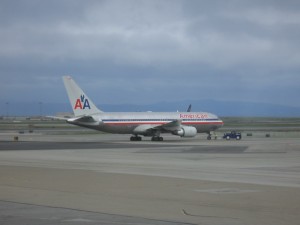 An American Airlines Boeing 777 at the San Francisco International Airport.

How would you like to fly to Australia in Qantas Airways’ luxurious first class on its new Airbus A380 aircraft for $1,200? You could actually buy such a ticket last week, but as regular readers of this column might have guessed, that was yet another case of a mistake fare.

Just like 2009, the new year began with a major airline making an error when filing a fare, and then deciding not to honor the issued tickets. As I wrote last January, Swiss International Air Lines published a $300 business-class fare from Toronto to several European and Indian cities. In November, British Airways filed a $560 round-trip coach fare from the United States to India.

On Wednesday, it was American Airlines’ turn. A frequent flier noticed that the $1,200 fare from Los Angeles to Sydney, which is typically an economy price, now booked into first class — not even business. Similar fares were available from other U.S. cities. Because American doesn’t fly to Australia, it offered code-share flights operated by its partner Qantas.

A savvy traveler would immediately recognize the immense value of such a deal. The few carriers flying the Airbus A380 — Singapore Airlines, Emirates, Air France, as well as Qantas — strictly guard access to the first-class cabin. Qantas operates such aircraft on the LA-Sydney route, with the lowest published first-class fare of about $20,000.

Not surprisingly, word about the unbelievable deal spread quickly on the travel Web site FlyerTalk, which tipped off other travelers who rushed to make bookings — and of course alerted the airline, resulting in the bargain’s death less than an hour after it was first reported.

American spokesman Tim Smith declined to say exactly how many tickets were issued but noted they were “in the very low three figures.” Still, American would have to pay Qantas for those seats — perhaps not $20,000 per person but a substantial amount nonetheless — so the Dallas-based carrier decided not to honor the sold tickets in first class but in coach.

It started contacting affected customers on Friday, Mr. Smith said, offering them several options. If they didn’t want to fly in economy, they could have a full refund and be reimbursed for expenses associated with the planned trips they had already incurred, such as nonrefundable hotel or rental car reservations.

They could also buy new tickets in first or business class at about two-thirds of published fares. As a “good will gesture,” American threw in $200 vouchers for future travel anywhere it flies, valid for a year.

On Saturday, many customers reported on FlyerTalk that their tickets were canceled without any communication from American. They were angry with the airline for not honoring the tickets as they were issued, saying it should pay for its mistake — and that, if passengers make booking errors, they are charged hefty penalties to correct them. Those fliers also found the options offered by American unsatisfactory.

“While we regret the error, we feel this situation clearly falls into the category of an obvious mistake that most people would view as ‘something that is too good to be true,'” Mr. Smith said.

American’s decision was “based on precedent and procedures established by other airlines in similar incidents,” he said in an apparent reference to the British Airways case. In November, the Department of Transportation forced the London-based carrier to reimburse customers, whose tickets to India were canceled, for nonrefundable expenses in connection with the botched travel, but it stopped short of demanding that the tickets be reinstated.

In its decision-making, American was likely emboldened by the fact that its fare was a much more obvious mistake than British Airways’ error. The U.S.-India $560 fare was several hundred dollars less than a regular coach price, but airlines have been offering unprecedented promotions in the past year to attract more passengers, so it wasn’t that far-fetched to think that there was a big sale.

“It wasn’t off-the-charts unheard-of cheap,” said David Peters, a law student at Columbia University in New York. On the other hand, American “showed a first-class fare at less than one-fifth of the business class fare for the [LA-Sydney] route — one of the most heavily trafficked first-class routes in the world.”

Another detail in American’s favor is that the fare-basis code for the price at issue is typically used for coach fares. Travelers certainly cannot be expected to know that, but Mr. Peters said the fare rules — at least for passengers who booked tickets on Orbitz.com — clearly stated “economy class.”

In 2007, United Airlines honored a mistake business-class fare from the West coast to New Zealand of about $1,600. After the British and American cases, however, such customer-friendly behavior is highly unlikely.