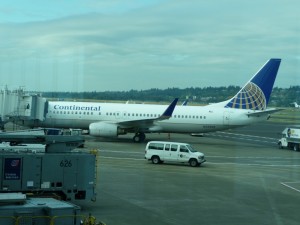 That may not have been what Continental set out to do, but it’s a positive side effect. The very day it officially joined the Star Alliance last week, it uploaded on its Web site “award” seats made available by other alliance members, which its customers can book using Continental frequent-flier miles.

It took “nine months of planning and implementation” and “involved the creation of more than 1,100 new ‘reward’ codes and all the processes to make them work,” said Continental spokeswoman Mary Clark.

Not all 24 Star partner-carriers are bookable online yet, but Continental’s speedy move surprised both the industry and members of its loyalty program, OnePass — although not exactly in the same way.

For customers, the online mileage redemption on partners such as United Airlines, Air Canada and Air China was a bonus to the significant increase in award seats that came with Continental’s switch to Star from its previous and much smaller alliance, SkyTeam.

“That is truly where Continental’s shift to the Star Alliance shines,” said Seth B. Miller, a frequent traveler from New York who writes the “Wandering Aramean” travel blog. “The increased availability and transparency of ‘reward’ access is a phenomenal benefit for Continental’s customers. In the first 24 hours, I was able to find and book seats in premium cabins to Egypt and back over Christmas.”

The transparency Mr. Miller mentioned, however, is not necessarily good news for other Star members. It’s no coincidence that only two other carriers — Japan’s All Nippon Airways and Air Canada — offer online access to the alliance’s award platform, known as StarNet. Airlines have long been secretive about the number of seats they offer for mileage redemption. Even if a carrier has no problem making its seats transparent, some of its partners may not be happy about that openness.

As readers of this column know well, United blocks many award seats made available by other Star members, such as Lufthansa, Thai Airways and Singapore Airlines, to avoid paying them for those seats, as required by contractual obligations.

Despite a heated debate about that previously secret practice among United fliers during the past year, many of the airline’s reservation agents are still unaware of it and continue to blame other carriers when the lack of award seat availability is, in fact, caused by the blocking. Now, when given that excuse, customers can easily go to the Continental site and verify that the flight in question has available seats — and they can book them using Continental miles, but not United miles.

Months before joining Star, Continental promised its customers not to engage in United’s practice, although the two carriers announced a close partnership as the largest Star members in the United States. The third largest is US Airways, which doesn’t block partner seats, either.

There was more good news for Continental customers that made United fliers jealous last week. They are allowed both a free stopover and an open jaw — arriving in one city and departing from another — on the same award ticket. United permits one or the other. Continental also allows routing a ticket from North America to Australia via Asia, which United doesn’t. On an issue that has become sensitive for top fliers — introducing cash “co-pays” when upgrading a domestic flight with miles — Continental won out again. It has exempted all elites from those fees, while United hasn’t.

The only disappointment for Continental customers was that, like United and most other U.S. carriers, one-way awards are still not allowed. American Airlines and Alaska Airlines are the only ones offering such tickets for half the miles needed for a round trip.

Otherwise, the cooperation between Continental and United seemed to have started well last week, with customers being able to earn miles of the other carrier’s flights and elites being recognized by the other airline.

Tom Romero, a platinum OnePass — and Star gold — member from Mission Viejo, Calif., said he flew on United from San Francisco to Santa Ana, Calif., on Wednesday and was able to “go through the elite line at [the airport], which saved a ton of time. This was done automatically via Web check-in.”

Even though United reserves access to its so-called Economy Plus seats for its own elites and no longer provides it to other Star gold members automatically, Mr. Romero said he got one of those seats with more legroom at the gate at no charge. “I think the transition is going smoothly,” he said.