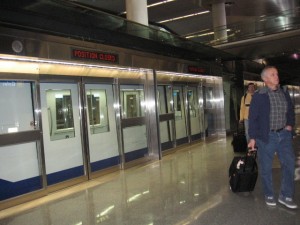 Washington Dulles International Airport is certainly taking its time to fully join the modern age of air travel, but the first steps in its journey are now complete, and they make an obvious difference. The most significant are the new international arrivals hall and the AeroTrain, which started running last week.

As readers of this column will recall, I have no love lost for Dulles. In the past, I’ve gone as far as to call it a disgrace for the capital of the world’s richest and most powerful country. Its many limitations include the archaic people-movers officially known as “mobile lounges” and the depressing interior of the “midfield terminal.”

The current management of the Metropolitan Washington Airports Authority (MWAA), though, deserves credit for beginning Dulles’ long-overdue modernization — however slow the entire process may be. I also appreciate the responsiveness of the MWAA’s press team, which usually provides timely and meaningful answers to my questions, even when it seems like I have a bone to pick.

Last week, for example, should have been celebratory. The AeroTrain’s introduction meant that many of those “mobile lounges” were gone. But as I rode the train from the main terminal to Concourse C on Thursday, I wondered how many “lounge” drivers had lost their jobs, and what parts of the airport still cannot be reached by train.

So I asked MWAA spokeswoman Courtney Mickalonis — instead of accusing me of focusing on the negative, as many other public relations representatives would have done, she simply answered the questions.

“A total of 54 mobile-lounge operator positions were eliminated, including 12 who were hired within the past few years with the understanding that their positions would be eliminated once the AeroTrain started service,” Ms. Mickalonis said. “The others were offered a compensation package by the Airports Authority.”

She also said the train’s current stops at the A, B and C gates will remain the only ones — meaning there will be no station at the D concourse — until the “midfield terminal,” which was supposed to be temporary when it was built in the mid-1980s and houses the C and D gates, is replaced by a new building. No one knows, however, when that will happen.

For the time being, people-movers will continue to transport passengers to the D concourse, though one can actually walk there from the train station at the C gates — provided one has the time and will to do so. In fact, reaching a C gate from the station could be quite a walk, too, so give yourself enough time.

I must admit I was impressed by the new international arrivals hall when I first saw it in September, but I attribute that reaction to my low expectations of Dulles. After all, the old arrivals facility was so crammed, depressing and lacked natural light that almost anything else would have been better.

The new arrangement added about 206,000 square feet and can serve about 2,400 passengers per hour, nearly doubling its previous capacity, the MWAA said. There are now 50 booths for immigration officers, though all of them are hardly ever used at the same time. But it is the high ceiling and large windows that make most of the difference.

By 2011, Dulles plans to have a new and bigger baggage-handling facility in the international arrivals hall.

My only remaining gripe when it comes to processing passengers arriving from abroad goes back to the people-movers, which will apparently continue to transport travelers to the international arrivals building for many years to come. It’s much better in terms of congestion at the immigration line for people to arrive at their own pace, rather than wait for the entire plane to get on the “mobile lounge” and then get dumped at the facility en masse. But Dulles simply doesn’t have the capacity to do that.

When I last wrote about Dulles in June, I also complained about the lack of reasonable and timely public transportation to and from the airport. I pointed out that a taxi from D.C. would cost you at least $60 each way.

In the fall, the MWAA, which runs Washington Flyer Taxi, the only company allowed to pick up passengers from Dulles, raised its rates even more to bring them “more in line with other jurisdictions in the metropolitan Washington area,” Ms. Mickalonis said.

It was no surprise that the authority tried to spin the increase as beneficial for passengers, saying it eliminated “incidental charges” — for luggage or “personal service,” when “the driver had to leave his vehicle to carry a passengers bags up to the door,” as Ms. Mickalonis put it. Most business travelers, however, carry only one bag, which was always free, so it’s hard for me to see the price hike as a “benefit.”

Since that column in June, I’ve also discovered that there is a Metro bus that goes to Dulles from D.C. for a total of $3 each way. The journey takes about 10 to 15 minutes more than a taxi ride, but for 20 times less than a cab fare, I’m happy to spare the time.