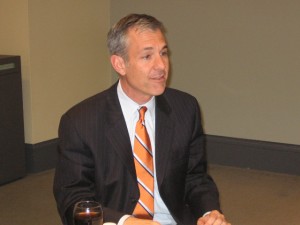 What makes a hotel loyalty program most competitive? Is it the elite benefits it grants its best customers or the variety of options it offers for redeeming earned points? Does it matter who’s asking: a program executive or a traveler?

It turns out, it does. As a customer, if I decide to be loyal to a hotel chain, the first thing I do is look up the requirements for achieving top elite status, and then the benefits that status would give me. Only after that do I consider the value of the program’s points.

Mr. Sickel said his chief mission is to make it the “most flexible” program in the industry by “putting control in the customer’s hands” — both by minimizing various restrictions and other conditions that usually accompany points redemption and by creating new ways for members to use their points.

“Our research shows that most people say, ‘If you give me that level of flexibility, I’ll stay at your hotels more.’ Customers are growing disenchanted with all the conditions loyalty programs put,” he said in an interview during his company’s recent annual meeting in Washington.

It would be wise for other executives to start thinking like Mr. Sickel — and to realize that artificially limiting how customers can use their own miles or points not only creates ill will but also keeps those points on the books, contributing to a company’s liability.

Hotel chains still have plenty of rules — some allow free transfer of points between accounts, but others don’t; some will let you make an “award” reservation and hold it for a limited time even if you don’t have enough points in your account, but others won’t.

However, airlines seem to be constantly taking the art of attaching numerous strings to redeeming miles to new levels. The differences in those rules from one carrier to another only add to travelers’ confusion and frustration.

So how is Priority Club increasing its flexibility? It recently added an option of using cash and points — instead of just points — for “award” nights. While very popular with customers, that practice is hardly new in the industry. Starwood, the chain that includes the Westin, Sheraton and St. Regis brands, and British airline BMI have been offering it for years.

You can now also use your Priority Club points for flights on hundreds of airlines. They are booked as regular revenue tickets, meaning there are no capacity controls and you can earn miles. Again, Priority Club followed Starwood, which introduced that option last year.

A truly innovative redemption opportunity that Priority Club offers is using its points for stays at hotels outside the InterContinental chain. When you redeem your points, you will get an American Express card with a certain amount. Feel free to go to any hotel you want and pay with the card at checkout.

Mr. Sickel said his goal is to enable Priority Club members to use their points instead of cash as widely as possible. Most hotel programs partner with a variety of merchants, but there is much more to be desired, he said. Even if customers never use most of the redemption options, just “knowing they can” makes a big difference when it comes to loyalty, he added.

“Many frequent travelers are tired of sleeping in hotel rooms, so the last thing they want is to redeem their points for more hotel nights. That’s why we offer so many other options,” Mr. Sickel said.

Keep in mind, however, that you will still get the best value for your points if you use them for stays at InterContinental chain hotels. Redemptions at other vendors are usually much more expensive.

Ben Schlappig, who writes the travel blog “One Mile at a Time,” said that Priority Club is his favorite hotel program, but “not due to the flexibility it affords.” He pointed out that, unlike Priority Club, Starwood allows points to be used for suite upgrades and hotel amenities such as meals, Internet service and even spa treatments.

“The main reason I’m a fan of Priority Club and InterContinental is because of the Royal Ambassador status, which is the most rewarding top-tier program out there,” he said. “The benefits are clearly defined, the experience is always consistent, and the treatment always excellent. The guaranteed upgrade, guaranteed early check-in and late check-out, free minibar, along with other benefits, makes it worthwhile.”