HomeHotels steps away from airport gates 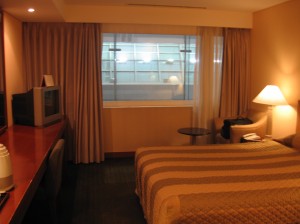 A room at the Transit Hotel at Seoul's Incheon International Airport.

A recent trip to Asia reminded me of the lack of entrepreneurial thinking exhibited by many U.S. airport operators. Readers of this column may remember my praise for terminals in Hong Kong and Singapore earlier this year.

Beyond design, comfort and cleanliness, having such a time- and hassle-saving convenience as a hotel under the same roof as your departure gate makes a lot of sense at a large international airport. It’s not hard to imagine that it could be a moneymaking venture.

Last month, as I was booking a trip through Seoul’s Incheon International Airport to another Asian destination, I realized that my inbound flight arrived too late for me to catch the last outbound flight for the day. Naturally, with Incheon being quite far from the city, I reserved a room at one of the hotels near the airport that provide free shuttle rides from the terminal.

But then I read about a transit hotel right in the terminal, a level above the gate area and inside the security checkpoints. The most pleasant surprise was that I wouldn’t have to go through immigration and customs to reach my room. The rate — about $150 — was comparable to what competitors outside the airport were charging.

When I arrived at Incheon and made my way to the hotel, I realized that I had walked past the escalator leading up to the rooms several times before without knowing it. The facility was by no means luxurious but had everything I needed for a night — a queen-size bed, a relatively big desk and a bathroom with a shower — including free Internet access.

The noise from the gate area seemed to stay downstairs — until about midnight, when some workers decided to replace a sign and started banging just across from my window. It took more than an hour for the receptionist to take care of the problem.

The next day, I walked the few steps from the hotel escalators to the gate and was on my plane in little more than a minute.

It’s true that flight connections have become more convenient in recent years, thanks to global airline alliances, but there still are enough passengers with long layovers to justify having sleeping rooms at major airports. Moreover, the economic crisis has forced airlines to cut much of their capacity, reducing the number of flights they offer.

Transit hotels also exist in the Middle East, where many flights arrive and depart in the middle of the night, but they are much less popular in Europe.

There are few such hotels in the United States, although a company called Minute Suites is trying to change that. Last month, it opened a small five-room facility at Hartsfield-Jackson Atlanta International Airport and already has attracted more than 300 guests, said co-founder Daniel Solomon.

“We went to frequent travelers with an initial concept, but they really built this. They said, ‘Give us a place to sleep, relax and work.’ So that’s what we did. It has the feel of an American living room,” he said.

Each room has a sofa, a small desk with a phone, a chair, a 32-inch plasma TV and free Internet. The closest restrooms are “about 50 paces away” in Terminal B, Mr. Solomon said. The rate is $30 for the first hour and $7.50 for each additional 15-minute period, with a 25 percent discount if you stay more than eight hours. Initial working hours were between 7 a.m. and 11 p.m., but “we are now 24/7, except during the holidays,” he said.

Although Mr. Solomon sees potential for another 20 suites in the airport’s international terminals, he is cautious about becoming a full-service hotel, which would trigger hotel taxes and raise prices. “We are not a hotel,” he said.

Mr. Solomon said Minute Suites is in talks with other airports. So are other companies, including Unique Retreat, which won a contract with San Francisco International Airport in October for 14 rooms in the international terminal. Edo Traveler Suites, a Canadian company, is also working with U.S. and Canadian airports to develop similar offerings.