Poland embraces past and moves ahead

HomePoland embraces past and moves ahead 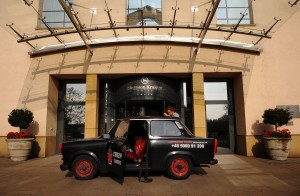 A Trabant in front of the Sheraton hotel in Krakow, Poland. (Photo by Astrid Riecken)

KRAKOW, Poland — A black Trabant pulled up in front of the Sheraton hotel and its driver helped passengers out of the boxy, cut-rate car that remains a symbol of communism two decades after its collapse.

The “communist tour” of Krakow was over. The 23-year-old guide, Eryk Grasela, had taken a Washington Times reporter and photographer to Nowa Huta, a suburb built in the 1950s as a “model communist city” and counterpoint to “bourgeois” old Krakow, long known as Poland’s cultural capital.

While other former communist countries have tried to erase many Cold War memories since they became democracies in 1989, Poland has embraced its past, made the best of it and moved on. Today, Poles seem more satisfied with their lives than many others in the region.

“For the most part, the transformation is over — the economy is doing well, even in a global recession, and people are happy,” said Mr. Grasela’s boss, Michal Ostrowski.

In a true capitalist spirit, Mr. Ostrowski, 31, has not only benefited from the market economy that Poland adopted 20 years ago but also has made money by showcasing a period of history that his peers in neighboring countries either know little about or would rather forget. He founded his company, Crazy Guides Tours, five years ago and now has about a dozen employees.

Although some disillusionment with democracy has set in throughout Central and Eastern Europe, Poles and Czechs are the most satisfied with the way their post-communist lives have turned out, according to various surveys.

“I think we should be very happy about what happened in Poland,” said Hubert Maruszkin, a 25-year-old journalist in Warsaw, citing the many opportunities young people here have today, compared with in 1989, and the country’s economy, which grew by 5 percent last year.

According to a poll by the Pew Research Center in Washington released last week, 47 percent of Poles said they are better off now than under communism. The figure was 29 percent in Slovakia and 8 percent in Hungary.

“Poland has made steady progress,” said Charles Gati, a specialist on Eastern Europe at the Johns Hopkins University’s School of Advanced International Studies. “It’s a remarkable example of what can be done under difficult circumstances.”

Another success story is Slovenia, which was not included in the Pew survey, he said. “Its economy has done well, and political parties have worked well together. It was the first ex-East-bloc nation to adopt the euro,” the decade-old common European currency.

Mr. Gati’s native Hungary, however, has been a disappointment, he said. “Hungary 20 years ago was the leader of the pack, and stayed that way in the ’90s. In the last decade, however, political infighting” has grown, with “unbelievably nasty” politics and “irresponsible spending to buy votes.”

Political infighting is familiar to Poles, too, and “people are disappointed with the political class” because they “don’t focus on the problems that need to be solved,” said Jacek Strzemieczny, 60, founder and president of the Center for Citizenship Education, a nonprofit group.

Corruption, crime and illegal drugs were cited as Poland’s main problems by the respondents in the Pew survey. “Racist attitudes are growing,” as are anti-Semitism and homophobia, Mr. Strzemieczny said. The country’s infrastructure and road network, while better, are improving at a slower pace than expected.

Still, in spite of disappointment with politicians, things seem to be getting done, more than a dozen young Poles said in interviews in Krakow and Warsaw.

“Sometimes we are surprised by our own success,” said Ewelina Jurkiewicz, 26, an interpreter in a bank and a freelance journalist.

“It’s an amazing success story, but sometimes we don’t know how to appreciate where we are,” said Andrzej Bobinski, 30, a senior strategic analyst at Telekomunikacja Polska, Poland’s main telecommunications company.

Magda Dzialoszynska, 25, who along with Ms. Jurkiewicz and Mr. Bobinski spoke at a round table discussion organized by the U.S. Embassy in Warsaw for this article, said older people are less enthralled with life after communism.

“My father is very critical about what’s happening and skeptical about the future,” Ms. Dzialoszynska said. But she added that it was a “burden” for the older generation “to take responsibility for what the country looks like and how it’s run” since the political systems changed.

Natasza Styczynska, a 28-year-old doctoral student in political science in Krakow, attributed older Poles’ expressions of disappointment to their need to “blame someone else” for their failures.

At the same time, many older people are happy with the changes, said Magdalena Lewicka, 26, whose parents “agree that Poland is in a good place.” But that may have something to do with her family being from the northern port city of Gdansk, “where it all started,” she said in reference to the birthplace of the Solidarity trade union, with which her parents were involved.

Poles were also encouraged by the 1978 election of Karol Wojtyla, archbishop of Krakow, as Pope John Paul II, which focused attention on repression in the Eastern bloc.

Two years later, Solidarity was founded, beginning a political opening that, despite setbacks, eventually led to Poland’s first semi-free elections in June 1989 — more than five months before the Berlin Wall fell. Poland was the first to implement economic reforms — the so-called shock therapy, which initially drastically raised prices — later adopted by other countries in the region.

That head start ultimately resulted in higher living standards and brought in goods that were common in Western Europe but that Poles previously could only dream about, Ms. Lewicka said.

“I was struck by what I saw when I first went to Sweden, but now there is no real difference,” she said. “Sometimes I go shopping in Berlin, and it’s frustrating, because it’s the same stuff we have here.”

Although it is now a member of NATO, Poland still views Russia as a grave threat. That has created a rift with the Obama administration. Warsaw is unhappy about Washington’s recent decision to scrap plans for a land-based missile-defense system in Poland and the Czech Republic.

One irony is that Poles, proud of their achievements and angry that they still need visas to enter the U.S., no longer idolize the United States.

“America is not a hero for us anymore,” Ms. Dzialoszynska said.