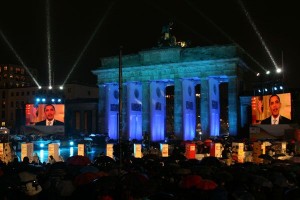 Commemorations of the 20th anniversary of the fall of the Berlin Wall at the Brandenburg Gate. (State Department photo)

BERLIN — Most Berliners adore their city and are proud that this former symbol of East-West division has become a modern and united capital, as well as one of the world’s most visited places. But 20 years after the wall dividing Berlin fell, the country is still not nearly as unified as the capital, many Berliners and other Germans say.

“We all underestimated the challenges,” said Friedrich Merz, a former member of parliament from Chancellor Angela Merkel’s ruling Christian Democratic Union and now chairman of Atlantic Bridge, a nonprofit organization. “It takes much longer to unify a country.”

Political analysts, economists and ordinary Germans point to the rapidity of communism’s fall, the legacy of state ownership and mistakes made at different stages of the reunification process as reasons why parts of eastern Germany remain underdeveloped and are still losing people to the West.

“About 65 percent of the citizens of the West have never been to the East. They haven’t considered it a part of their country,” Geert Mackenroth, outgoing minister of justice in the eastern province of Saxony, said in his office in the state capital, Dresden.

Mr. Mackenroth, one of many public officials in the East who originally came from the West, said that Saxony has 16 percent unemployment — better than the 25 percent rate a decade ago, but still more than twice the national average, which last month was 7.7 percent. The situation is even worse in the far-eastern provinces, he said.

Mrs. Merkel originally came from East Germany, and when she became chancellor in 2005, hopes were high that more attention would be paid to the East. Four years later, however, many Easterners still have an inferiority complex, Mr. Mackenroth said.

About 63 percent of East Germans polled recently by the Pew Research Center said that “they are better off as a result of reunification,” said Andrew Kohut, the center’s president. “But now, as then, many in former East Germany believe they were overwhelmed by West Germany, that unification happened too quickly, and that the East still lags the West.”

Erland Ritter, a 35-year-old engineer and business consultant who grew up in West Germany and now lives in Berlin, said what took place after the end of the Cold War was not integration but a takeover of the East by the West.

“If you are being overrun, you have resistance,” he said.

Stefan Elfenbein, who was a 25-year-old German newspaper correspondent in New York in 1989 before he moved to Berlin, said many East Germans lost part of their identity when “their country disappeared.” More importantly, he added, “Western Germans didn’t realize their country had disappeared, too.”

In the Pew survey, 67 percent of West Germans said their lives have not been affected by reunification. Still, Mr. Elfenbein said many West Germans resent the billions of dollars in subsidies for the East that they have paid as part of their taxes.

On the eastern side, the economy is the focus of discontent.

Henrik Enderlein, associate dean and professor of political economy at the Hertie School of Governance in Berlin, said then-Chancellor Helmut Kohl erred in deciding to introduce a one-to-one currency-exchange rate between the two German states after reunification. As a result, “wages in the East went up,” but the quality of the work force did not, so “companies kept production in the West,” which led to heavy unemployment in the East, Mr. Enderlein said.

He also said that privatization in the former German Democratic Republic was “done badly,” and that many state-owned companies “were sold in non-transparent manner.”

Similar complaints have been voiced in other East European countries and in Russia, where people with links to former communist regimes dominated among the new owners.

Mr. Mackenroth said bigger eastern cities, such as Dresden and Leipzig, were relative winners from reunification because they have attracted new investment and now have infrastructure that is more modern than in many cities in the West.

However, about 1.7 million people — 12 percent of the population of the former East Germany — have moved West since the collapse of communism. The economic challenges in the East have exacerbated social problems, such as the emergence of neo-Nazis and other extremist groups.

In July, in a shocking incident in a Dresden courtroom, an unemployed 28-year-old East German who originally came from Russia fatally stabbed a pregnant, head-scarf-wearing Egyptian pharmacist who had sued him for hurling anti-Islamic epithets at her.

Germany’s far-left party, the Linke, which emerged from the former Communist Party, startled many when it won an unprecedented 12 percent of the vote in the country’s September elections, increasing its seats in the 622-seat parliament from 54 to 76. Most of its support came from eastern Germany, where it got 26 percent of the vote.

Despite the problems, Germany “made enormous reconstruction efforts in its eastern part, going along with dramatic changes in the personal lives of the people,” said Klaus Scharioth, the German ambassador to Washington.

“For the older ones, it has been a time of great success for many and of disappointment for some,” he said. “At the same time, our younger generation knows about the division of their country and of Europe only from our narration and from the history books.”

Mr. Elfenbein said that every German “should visit Berlin to see how the country should work.”

Because of intensive reconstruction efforts, the capital’s eastern part is no longer inferior to the western part. The city, which is home to citizens of nearly 200 countries, including thousands of Americans, boasts more than 50 theaters, seven symphony orchestras and three opera houses in addition to world-famous museums and tourist attractions such as the Brandenburg Gate.

Many media organizations moved their headquarters from Hamburg, former West Germany’s media center, to Berlin in recent years, said Joerg Quoos, deputy editor of the Bild newspaper. “Berlin is the right place to be as a journalist,” he said.

Mr. Ritter said he first visited West and East Berlin as a teenager in the 1980s and kept coming back until he moved here seven years ago. In the 1990s, “Berlin wasn’t truly united — in people’s minds or visually,” he said. “But when I came to live here in 2002, I finally saw the city I fell in love with.”