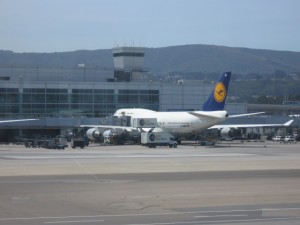 A Lufthansa Boeing 747 aircraft at the San Francisco International Airport.

Although two of Europe’s major carriers — Austrian Airlines and Turkish Airlines — have been serving Iraq since 2008, their re-entry in that market was viewed as only moderately significant at the time, and none of their peers followed suit.

Austrian chose Erbil, the capital of Kurdish northern Iraq, which was never nearly as violent as the rest of the country. Turkish began flying to Baghdad, as well as Erbil, but Turkey is not a European Union member. Neither carrier has a truly global network to connect Iraq with many other countries on different continents.

Britain’s second-largest carrier, BMI, said in April it would also start flights to Baghdad, but those plans haven’t materialized.

Last week, Iraq received a major vote of confidence when Germany’s Lufthansa became the largest airline to announce renewed services for the first time since the first Gulf War, beginning this summer. It operated flights to the country from 1956 until 1990. Both Austrian and BMI are part of the Lufthansa Group.

“This reflects our group’s confidence in the economic recovery of Iraq,” said Lufthansa spokesman Martin Riecken. “As Iraq’s civil aviation continues to open up, demand for flights to the country is growing.”

The airline plans flights from its Frankfurt and Munich hubs to Baghdad and Erbil, though all four routes are unlikely to be served at the beginning, and the exact city-pairs will be determined in the next few months, Mr. Riecken said.

Once operations start, Iraqis will be able to book single-connection Lufthansa flights to more than 200 destinations in about 80 countries on five continents. The carrier’s membership in the global Star Alliance will provide access to more than 1,000 cities in 175 countries.

Many of those destinations, of course, are in the United States, which is why security at connecting European airports is of concern to the Transportation Security Administration (TSA), especially after the Christmas Day attempted bombing of a Northwest Airlines flight from Amsterdam to Detroit.

Lufthansa’s hubs have plenty of experience in inspecting transit passengers from the Middle East — after all, the carrier has been flying for years to countries like Iran and Yemen, where the Nigerian would-be bomber, Umar Farouk Abdulmutallab, had received al Qaeda training. Still, with the new flights from Iraq, Frankfurt and Munich are likely to attract additional scrutiny from the TSA.

“Safety and security for our passengers and crew is always of utmost importance and a basic requirement for launching a new flight,” Mr. Riecken said. “Prior to our announcement, a group of experts has explored all relevant aspects in terms of infrastructure on the ground, as well as any safety- and security-related issues, and we are anticipating a safe and secure operation to both cities in the summer.”

The few other foreign carriers with flights to Iraq include Royal Jordanian, which serves Basra and Sulaymaniyah in addition to Baghdad and Erbil, Bahrain’s Gulf Air, Lebanon’s Middle East Airlines and the Sweden-based charter-carrier Viking Airlines.

Eli Lake, a Washington Times colleague who flew to Baghdad on Gulf Air in November, said both his inbound and outbound flights were about an hour late.

“The airport is average for the Middle East — it’s no better or worse than Cairo’s airport, though a little less modern. Getting out of the airport is not so much of a chore, but getting in requires patience and time. You have to take a cab to the edge of the military base, and from there it’s quite a burden to go through the various military check points.”

Iraq’s government has repeatedly encouraged foreign airlines to begin services to the country, whose economy grew by an estimated 7.8 percent in 2008, according to the CIA World Factbook. Figures from last year are not yet available.

Austrian Airlines is “very satisfied with the demand for our current flight from Vienna to Erbil,” said spokeswoman Patricia Strampfer.

“In the light of a robust and stable demand, we will increase the frequency of this connection from three to five flights per week in the summer and are also currently examining an additional flight from Vienna to Baghdad,” she said.