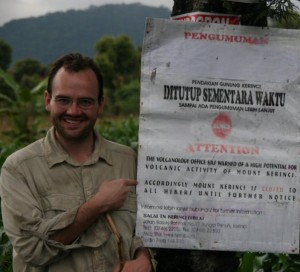 Alex Cohen, a slot-machine game designer, during a trip to Indonesia.

I’ve always wondered why airport agents in the United States — whether at check-in counters, gates or even business lounges — can do almost anything a passenger needs, including rebooking, rerouting and reissuing tickets, while agents in other countries are much more specialized, and thus less helpful.

Rather than make sense of that reality, I’ve found a way to work around it: Whenever possible, I make sure that my tickets are issued by a U.S. carrier. That doesn’t mean that I don’t fly on foreign airlines — in the era of code-sharing, global alliances and other partnerships, that limitation is no longer an issue.

What it does mean is that, when something goes wrong during a trip, I don’t have to queue up for hours and be at the mercy of airport agents in another country, who rely on their computers to tell them what to do, rather than apply some creativity.

Instead, I can call my original ticketing carrier in the U.S. and have my ticket reissued in minutes. Even if my new flight is operated by a foreign airline, thanks to electronic ticketing, I can simply walk to the check-in counter or kiosk to get my boarding pass.

In the past several years, I’ve been very impressed by the competence, flexibility and calm of U.S.-based agents when handling disruptions. Not that there aren’t some less helpful ones, but a request to speak to a supervisor — or hanging up and calling again — usually solves that problem. The trick is to get an agent in the U.S., and if you are not a top elite flier, you might have to endure outsourced call centers in India, where I hear things are very different.

All that may seem too abstract to most travelers, as it did to Alex Cohen, a 28-year-old slot-machine game designer from Reno, Nev., until he experienced it first-hand last month.

Mr. Cohen was on his way home from Venice, Italy, when his Lufthansa flight to Munich was canceled because of bad weather. Although he was already in the gate area, the customer-service line in the terminal was too long, so he went back to the check-in counter outside. To his surprise, the agents there told him they couldn’t rebook him on another flight and sent him to a ticketing office in a different part of the lobby.

To those of us in the U.S., that sounds rather puzzling. Why aren’t agents in Europe and elsewhere trained to perform all major tasks needed at an airport? Why waste even more of passengers’ time when they have already been delayed? If carriers care little about that, how about their own efficiency?

Finally, Mr. Cohen was booked on a Lufthansa flights to Frankfurt and on to Denver — he had missed his original connection from Munich to Philadelphia — and then to Reno on United Airlines. Lufthansa and United are founding members of the global Star Alliance and have one of the industry’s closest partnerships.

That, however, wasn’t the end of it. Mr. Cohen’s flight to Frankfurt was delayed, and he missed his Denver connection. As a Gold Star Alliance member, he went to the Lufthansa lounge, hoping that an agent there could rebook him again. After all, Frankfurt is the carrier’s main hub, so perhaps the agents there are better trained than in Venice, he thought. Of course, he was wrong.

“The agent in the lounge sent me to the service center in the terminal, but the person managing the long queue there said I’d be better off going outside to the check-in area,” Mr. Cohen recalled on Friday.

He obliged, only to be told again by the check-in agents that they couldn’t rebook him, and he need to go “upstairs to the ticketing office” and wait in yet another line, he said. He was trying to get on a United flight to San Francisco, and with less than half an hour left before departure, he decided he’d had enough of Lufthansa.

He called United, which had issued his ticket, and as a top elite member of its Mileage Plus program, he got an agent in the U.S. who instantly figured out what had happened to his original itinerary and put him on the San Francisco flight he wanted, with a connection to Reno, within seconds. Then he walked to the United counter to quickly get his boarding passes and arrived at the gate just as it was about to close.

“It was stunning how efficient the United agent was,” Mr. Cohen said. “When things go wrong [during a trip], it’s gratifying to deal with U.S. agents.”

Lufthansa may be better than United in other respects, but when it comes to helping stranded passengers — especially elites — United undoubtedly wins out. Mr. Cohen’s only mistake was that he didn’t call United earlier. I learned that years ago, and my experience since then has been overwhelmingly positive.

Actually, Mr. Cohen was incredibly lucky to have a United-issued ticket. He purchased his original ticket from US Airways, but his very first outbound flight on his way to Venice — from Reno to San Francisco — was on United. That flight was canceled, and United ended up reissuing the ticket on its own ticket stock. Had that not happened, he most likely would have come home a day later than he did.

A Lufthansa spokesman in the U.S. didn’t respond to a request for comment on Mr. Cohen’s experience, but this is hardly a Lufthansa issue. Most foreign carriers have similar customer-unfriendly policies. Here is something they can learn from their U.S. colleagues.