Who gets first meal choice on board?

HomeWho gets first meal choice on board? 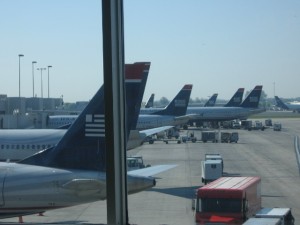 US Airways aircraft at the Charlotte Douglas International Airport.

Meal choices in first and business class are hardly a concern for most air travelers, who have much more basic things to worry about these days, such as never-ending extra fees. Still, premium fliers are essential for an airline’s well-being, and they have certain expectations from the product they pay for.

It’s true that many passengers end up in the front cabins — especially on domestic U.S. flights — thanks to free upgrades, but they get them because of their loyalty to the respective carrier. Of course, there are also people who pay to sit up front — as few as they may be — so those cabins deserve serious attention.

Dining in first and business class is not the luxurious experience it once was, but if you are a frequent traveler with a confirmed seat there, you probably rely on those meals to save you the time and hassle of trying to grab a bite before boarding.

How do you make sure you get your meal choice? Airlines today rarely load more meals than the number of seats in the cabin, and they can’t predict every passenger’s preference, so someone is bound to be disappointed — particularly on domestic flights, where there are usually only two meal options. In fact, United Airlines offers just one option in business class on domestic flights operated on internationally configured three-cabin aircraft that also have first class.

If you fly consistently on one carrier, you are no doubt familiar with its meal-choice policy. But if you travel on different airlines, and if you care about the food on board, it’s a good idea to learn those policies in advance, because they are much less alike than you might expect.

While most carriers simply start taking orders from the first row, some don’t. As regular readers of this column know, I do almost all my flying on members of the global Star Alliance, and among them United stands out with what I find the best system — top elite customers and full-fare passengers get priority. Even though this model doesn’t quite have the precision of the computer software that processes upgrades, flight attendants do an excellent job.

Come to think of it, other Star Alliance members, such as Germany’s Lufthansa, Singapore Airlines, Thai Airways and Air New Zealand, don’t seem to need such a system. I can’t remember being aware of a fellow passenger not getting their first choice on any of the dozens of flights I’ve taken on those carriers.

American Airlines, which belongs to the Oneworld alliance, has a system different from both United’s and the widely accepted front-to-back model. It begins from the front on even-numbered flights, but from the back on odd-numbered flights, said Ben Schlappig, who writes a travel blog called “One Mile at a Time.”

US Airways, another Star Alliance member, is exploring yet another model — front to back on eastbound flights, and back to front on westbound ones. Hector Adler, the carrier’s vice president for in-flight services, shared that idea with a pilot who contacted him last week about an experience I had during a flight to Central America.

As soon as I boarded, I asked the purser about the meal choices in first class and mentioned that I’d like a salad, rather than a sandwich, if possible. I sat in the last of three rows, and by the time the purser came to me, she had only a sandwich left. I was obviously displeased and tried to tell her about United’s system, which is much less arbitrary, hoping that she could share it with her management. But she refused to listen, simply saying “This is not United.”

Ironically, only days later, reports surfaced about merger negotiations between United and US Airways.

Although the purser had no interest in any of my suggestions, a pilot sitting next to me was much more curious, so I explained the United model. In a letter to senior management, the pilot wrote that the carrier’s current meal-choice policy “does not seem to recognize and reward the very passengers we value most.”

Recounting my experience as a witness, the pilot called me “most polite and courteous, although clearly disappointed” and asked, “Don’t you believe it would be worth revisiting the food-service policy to reflect the [elite] and fare status of the first-class passengers when honoring meal choices?”

Two US Airways executives responded immediately. Elise Eberwein, executive vice president for people and communications, was very impressed that the pilot took the time to write her letter, which showed that she had “great empathy for our customers,” in Ms. Eberwein’s words. “Many times we don’t know exactly who is up front…, but the suggestion makes good sense and we’ll look at it,” she said, adding that she would “pass it along” to Mr. Adler.

He, however, wasn’t convinced the United model was the best.

“Consistently offering first choice to [top elite] customers within hearing range of others can get very tricky. Many people become quite vocal about this, so it’s always a balancing act,” Mr. Adler wrote.

“One procedural change we are exploring is taking meal orders forward-aft on eastbound flights, and aft-forward on westbound flights,” he said. “With pre-reserved seating, most customers have the same seat assignment on their outbound, as well as their return trip. By doing what we propose, customers could get their choice at least in one direction.”