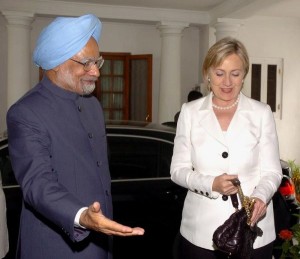 In the most recent accord completed late last month, Washington agreed to Indian demands to increase the number of plants allowed to reprocess U.S.-supplied nuclear fuel from one to two, with the option of another two if India’s needs grow in the future.

At the same time, India thus far has failed to pass legislation that would release U.S. companies from liability in case of accidents related to equipment they have provided for two reactors expected to be built under the 2007 U.S.-Indian Nuclear Cooperation Agreement. That effectively prevents those firms from starting businesses in the South Asian country.

The U.S. government understands “the need for sufficient indigenous Indian capacity to reprocess or otherwise alter in form or content, under [International Atomic Energy Agency] safeguards, U.S.-obligated nuclear material,” says the new document, which was released by the State Department.

In 2008, the Bush administration restricted Indian reprocessing to one plant in an effort to limit potential proliferation of dangerous dual-use technology, which could be used for military or civilian purposes.

However, last month’s agreement refers to “two new national reprocessing facilities established by the government of India.” It also says that “the management of separated safeguarded plutonium … shall take into account the need to avoid contributing to the risks of nuclear proliferation, the need to protect the environment, workers and the public.”

Arms control experts denounced the new deal, saying it adds to the “damage” done by the original agreement. In an unprecedented move at the time, the Bush administration went against established norms and allowed a country that has not signed the Non-Proliferation Treaty (NPT) to use U.S.-supplied fuel to make plutonium, though for strictly civilian purposes.

“It will further undermine U.S. efforts to stop the spread of enrichment and reprocessing technologies,” Daryl Kimball, executive director of the Arms Control Association, said of the March deal. “It should be rejected by Congress because it is inconsistent with the terms outlined in” the original agreement.

The new document does not need congressional approval and will go into force unless Congress stops it within 30 days. Administration officials and analysts said they do not expect any hurdles on Capitol Hill.

“There was never a possibility that the arms control people would like the U.S.-India agreement — they hated it from the beginning,” said Teresita Schaffer, director of the South Asia program at the Center for Strategic and International Studies. The number of reprocessing facilities “shouldn’t be a deal-breaker,” she added.

A State Department official said the administration agreed to allow two plants instead of one to avoid long-distance transportation of dangerous materials to just one reprocessing facility from two nuclear reactors on opposite sides of India.

Under the initial agreement, U.S. companies are allowed to help build the two reactors. The sites that the Indian government chose for those facilities are in the western state of Gujarat and the eastern state of Andhra Pradesh. “Highly radioactive spent fuel” will have to be “carried in big storage casks” to the reprocessing plant from those sites, and it is safer to have two plants close to each reactor than to move the casks across the country to only one plant, the official said.

The State Department official said the government in New Delhi planned to submit the legislation recently but decided against it because of a “big backlash” from several political parties that want the Americans “to pony up in the event of an accident.” The law would bring Indian legislation in line with international standards, under which the equipment operator — not the supplier — is liable in accidents.

Even though the 2007 agreement allows American companies to export equipment for the Indian reactors, they still are banned by U.S. law from selling India reprocessing and enrichment technology.

Mr. Kimball said the Indians most likely will seek such technology from other countries in the Nuclear Suppliers Group (NSG), which “maintains a policy of ‘restraint’ regarding the transfer of reprocessing or enrichment equipment” but does not ban it.

The State Department official expressed doubt that Western NSG members will sell such equipment to India, but Mr. Kimball cited recent reports that Prime Minister Manmohan Singh “is reported to have appealed to [Russian] President [Dmitry] Medvedev for reprocessing technology and equipment transfers.”

“This is a major proliferation danger, since there is no civil-military separation plan or safeguards regime that can prevent such technology from being sold for civilian purposes, and then used or copied for use in making nuclear weapons,” Mr. Kimball said.