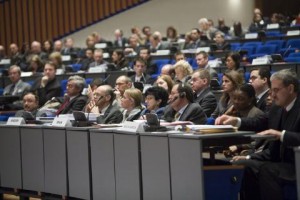 The plenary hall of the Assembly of the States Parties of the International Criminal Court at The Hague. (ICC photo)

Although the United States has rejoined the meetings of the International Criminal Court (ICC) member states after an eight-year absence, it has taken little new action to work more closely with the court.

In fact, many international legal analysts argue that there was a more significant change in U.S. policy toward the ICC from the first to the second term of President George W. Bush than there has been since President Obama took office last year.

“The administration has been very cautious and slow, and has not made dramatic changes in approach towards the ICC,” said John B. Bellinger, the State Department’s legal adviser under Secretary of State Condoleezza Rice.

“During a 10-month policy review last year, they made no changes in policy, and in November they announced rather tepidly that they would attend the assembly of state-parties… as an observer, but emphasized that they had continuing concerns about the possibility of politicized prosecutions of Americans,” he said.

President Clinton signed the ICC treaty in 2000 but made clear that he had no intention of submitting it to Congress for ratification. He had serious concerns about potential prosecution of U.S. officials and soldiers, after Washington’s failure to amend the treaty to secure certain protections for Americans. Still, he wanted to send a message to the world that the United States believes in international justice.

The Bush administration later said that such messages had little meaning and “unsigned” the treaty in 2002. During its second term, the administration became much more supportive of the ICC and helped in its prosecution of Sudanese President Omar Bashir for crimes in Darfur.

“The Bush administration went too far during its first four years in distancing itself from and criticizing the ICC, which made the rest of the world think that the administration didn’t support international justice,” Mr. Bellinger said. “During the second term, we took a more pragmatic approach of offering to help the court’s Darfur investigation, and the policy shifted significantly to one of selective engagement.”

Luis Moreno-Ocampo, the ICC prosecutor, recently said that Mr. Bush pursued a “policy of constructive engagement” in his final years in office, “for which we are grateful.”

When Mr. Obama won the 2008 election, many Democrats, including members of his administration, hoped he would rejoin the ICC statute and step up U.S. support and cooperation with the court. Some even thought he might try to ratify it. However, the president has done none of those things.

One of the most passionate advocates of the tribunal has been Harold Koh, Mr. Bellinger’s successor at the State Department, administration officials said. But Mr. Koh’s efforts to strengthen Washington’s relationship with the court, they said, have met resistance from the Pentagon’s civilian and military leadership, including Secretary of Defense Robert M. Gates and Army Secretary John M. McHugh, a former Republican congressman.

Spokespeople for Mr. Koh, Mr. Gates and Mr. McHugh declined to comment, but officials familiar with the issue said Mr. Obama has been siding with the Pentagon.

In a speech before the American Society of International Law in March, Mr. Koh said the administration is looking for ways to cooperate with the court as an observer.

“We would like to meet with the prosecutor at the ICC to examine whether there are specific ways that the United States might be able to support the particular prosecutions that already [are] under way in the Democratic Republic of Congo, Sudan, Central African Republic and Uganda,” he said.

Jed Babbin, a former deputy undersecretary of defense, said he is not surprised that Mr. Obama has maintained most of Mr. Bush’s policy on the ICC because the president is “pretty fully engaged with his domestic agenda” and this year’s midterm elections. Next year, that could change, he said.

Administration officials said Mr. Koh and Stephen Rapp, the State Department’s ambassador at large for war crimes, will head the U.S. delegation to the ICC 10-year review conference in Kampala, the capital of Uganda, this month.

Washington’s main concern is that some ICC members could push for giving the court the authority to prosecute aggression as a crime, similarly to genocide and other war crimes.

“In particular, we are concerned that adopting a definition of aggression at this point in the court’s history could divert the ICC from its core mission, and potentially politicize and weaken this young institution,” Mr. Koh said in his March speech.

Ahead of the Kampala conference, the Council on Foreign Relations released a report saying that adding aggression to the court’s jurisdiction “could endanger U.S. interests and risk embroiling the court in political disputes over investigations.”

The report also recommended that the Obama administration increase its cooperation with the ICC.

“The United States should consider boosting its cooperation with the court in such areas as training, funding, the sharing of intelligence and evidence and the apprehension of suspects,” it said.