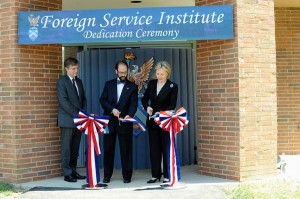 Historically, the State Department hasn’t been a big champion of education and training — it has relied mostly on diplomats learning their craft on the job, and taking time for a course at the Foreign Service Institute (FSI) in Arlington, Va., was long deemed almost futile.

The introductory A-100 class every new diplomats is required to take, has been shortened several times over the past two decades, and is now only five weeks long. Given that many Americans join the Foreign Service with no significant knowledge, background or experience in foreign affairs, it’s hard to understand how they can be prepared to represent the United States abroad in five weeks, before they arrive at their first posts.

However, that attitude has been changing in the last several years, and FSI’s new expansion, which was christened by Secretary of State Hillary Clinton on June 18, is the latest proof. Nearly 100 new classrooms have been built, adding to the institute’s facilities that can now train as many as 60,000 students a year, according to Clinton.

“FSI once trained 3,000 students a year with a focus on orientation and language skills,” she said. “the curriculum has been widened in order to provide more of the education and training that is called for, including classes in public diplomacy and outreach, crisis response and stabilization, economic governance and democracy building, and preparation for high-stress assignments to the most difficult posts in places like Iraq, Afghanistan and Pakistan.”

There are no indications that A-100 will be extended beyond five weeks.

“By adding nearly 100 classrooms, we will help ensure that FSI continues to provide the full training curriculum and the training experience. I mean, it’s not just what you learn in the classroom. It’s the interactions. It’s the space to be able to spend time and learn from each other, the mentoring that goes on,” Clinton added.

FSI, whose official name is George P. Shultz National Foreign Affairs Training Center, was founded in 1947. It replaced the Foreign Service School, which was established in 1924.