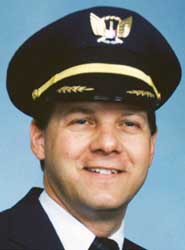 Captain Dennis Flanagan, the United Airlines pilot I profiled last year, just reminded me about the upcoming anniversary of the September 11 attacks and the scholarship fund in the name of his former colleague, Captain Jason Dahl, who was at the controls of United Flight 93 that crashed in Pennsylvania.

The charity, whose official name is the Captain Jason Dahl Scholarship Fund, was established soon after the pilot’s death by his wife Sandy. Each year, two aviation students — one at Dahl’s Alma Mater, San Jose State University, and one at Metro State University in Denver, where Dahl lived — are awarded $5,000 grants. There have been 16 recipients so far.

The fund’s ambition is to expand and offer scholarships nationally, and it uses this time of year to do fund-raising, said Flanagan, who is better known as Captain Denny. “It seems the farther we get away from that tragic day, the less people remember. Our goal is to keep Jason’s memory alive and not let anyone forget,” Flanagan said.

You can learn more about the fund, its board of directors and past scholarship winners on its website, where you can also make a contribution.

“Jason Dahl represented the best in the American aviation community, always providing assistance to others in both his chosen vocation and his community,” the site says. “The family and friends of Captain Jason Dahl strive to be more like him.”

As has been well documented in press reports, Dahl, who was 43, wasn’t originally scheduled to work that fatal flight on Sept. 11, 2001. He traded trips with a colleague so he could take time off for his wedding anniversary on Sept. 14. Still, he seems to have had second thoughts, as he later sent out an e-mail message looking for another pilot to replace him on Flight 93.

The hijacked flight, a scheduled service from Newark, N.J., to San Francisco and the subject of the film “United 93,” is believed to have been headed to Washington. The Boeing 757 aircraft was ultimately brought down by passengers who apparently stormed the cockpit and attacked the hijackers. The plane crashed in a field in Stonycreek Township, near Shanksville, Pa.

Most of us remember where we were and what we were doing when we first heard of or saw those planes smashing into the World Trade Center. Each year on Sept. 11, commemorative ceremonies take place in New York, Washington and in that Pennsylvania field.

As it happens, this year I’ll be teaching a seminar in New York on that day, and two weeks later in Boston, from where the two planes that hit the Twin Towers departed. We have our own ways of remembering and paying respects, and mine is helping travelers make their journey less stressful and more enjoyable.