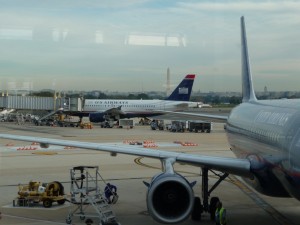 Did you know that hundreds of fictitious flights inhabit airline schedules every day? They don’t exist in real life — just on paper. They are meant to make more money for the airlines by tricking customers and perverting a practice that was actually started to help travelers. In fact, they spell nothing but trouble for passengers.

Those fictitious flights are labeled “direct” by the airlines, which years ago decided to rewrite the dictionary and use that term for flights that weren’t nonstop but made at least one stop on the way to their destination. First, those flights were operated by the same aircraft, but later a “plane change” was introduced. The Department of Transportation has allowed the airlines to abuse the practice any way they like.

On my way back home from Boston last weekend, I was on United Airlines Flight 897, which the purser announced repeatedly was “a nonstop service to Washington Dulles, with continuing service to Beijing.”

I immediately cringed, because there is nothing “continuing” about the two flights, except for their number. The plane I was on was a two-cabin Boeing 757 and arrived at gate C19 at Dulles. The plane destined for Beijing was a three-cabin Boeing 777 and departed from gate C3. So the passengers connecting to Beijing did exactly what others did connecting to Flight 803 to Tokyo at gate C1 — or any other flight for that matter. They left the first plane and walked to their new gate.

Did the Beijing-bound travelers benefit in any way from the fact that their tickets had one flight from Boston to Beijing? Absolutely not. In fact, many of them were probably surprised to discover they were on two separate flights.

Then why does United even have that fictitious “direct” flight? Because it wants customers to think that they can fly from Boston to Beijing without the hassle of a connection — a competitive advantage no other carrier offers.

Have you tried to upgrade a “direct” flight? That can be a nightmare — not just for passengers but also for those who work in inventory management. They have to create inventory for a flight that doesn’t exist and to balance the load of two separate flights on different aircraft types with a different number of cabins and hugely different number of seats. As a result, the lowest booking classes and upgrades are often unavailable on “direct” flights. Some travelers are willing to pay more to avoid the hassle of transfers, not realizing there is a hidden connection.

Almost every international United flight has a domestic tag attached to it, but United is by no means the only U.S. airline abusing the system. All major carriers do it. Delta pretends to fly “directly” from Minneapolis to Moscow, Continental from Amsterdam to Denver, US Airways from Los Angeles to Zurich and American from Tokyo to Boston.

As I wrote two years ago, United and Delta are the biggest abusers, while American seems to be the most prudent in that most of its “direct” flights are operated by the same aircraft. American is also the only one whose website displays a “direct” flight as two separate segments at the very beginning of the booking process.

In the rare cases when foreign carriers, such as Lufthansa and Singapore Airlines, operate “direct” flights, they are flown on the same plane, so there is no danger you will miss your “continuation,” which happens regularly on U.S. airlines. If my flight from Boston to Washington had been late, United wouldn’t have held the plane for Beijing just because the two flights share the same number.