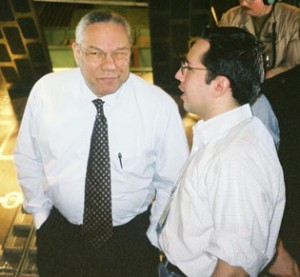 Nicholas Kralev talks to Colin Powell during a C-130 flight to Kabul in March 2004.

So here is a brief summary of my impressions and experiences with three people who had very different backgrounds but rose to the highest levels of the U.S. government and became household names around the world.

After handing the job over to Clinton in January 2009, Rice returned to Stanford University in Palo Alto, Calif., where she has spent most of her career, and where I first met her in January 2000. We did an interview for the Financial Times over a long breakfast at the famed Ricky’s Hyatt hotel, after which we drove — in our separate cars — to her office at the Hoover Institution.

I was a student at Harvard at the time and was first introduced to Rice indirectly through a book she co-authored with Philip Zelikow, “Germany Unified and Europe Transformed.” I thought she had a great story, and my editor in London agreed, so I sent Rice an e-mail message requesting an interview and she agreed to do it. I flew to San Francisco a day after my last final exam for the semester.

Condi, as she introduced herself, was utterly charming and exhibited great confidence while responding to my questions about various foreign-policy issues.

The next day, I was in New York to interview Barbara Walters, and I told her about the fascinating woman I’d just met, who might be national security adviser or secretary of state some day. Barbara’s reaction was, “She is not big enough for me yet.” In 2005, Barbara included Rice in her “10 Most Fascinating People” ABC special, but Rice declined to be interviewed. I take absolutely no credit for that decision.

In her first year as secretary, Rice was far from the confident woman I’d met five years earlier. On the plane, she appeared closed off and a bit insecure, which had a lot to do with getting used to the sudden and overwhelming public attention focused on a very private person.

That, of course, changed, and eventually she became one of the most influential secretaries of state in history, mainly because of her closeness to President George W. Bush. She recently published a book about her parents, which she has been promoting in the media, including on the “Daily Show” with Jon Stewart. A book about her experience in the Bush administration is planned to next year.

I didn’t meet Powell until he was already secretary of state. I always had deep respect for him, but what impressed me on trips with him more than anything was his rare ability to hold meaningful conversations with various kinds of people — from a handyman or a cleaner to presidents and kings.

While Rice couldn’t wait to get back to her private cabin after a briefing on the plane, Powell spent a lot of time with us, often joking — and teasing me for being the youngest in the press corps. Looking back, perhaps that was an escape from the fierce battles he was fighting with Vice President Dick Cheney and Defense Secretary Donald Rumsfeld, who would often use his absence from Washington to outmaneuver him.

In 2004, I did an interview with Powell for an eight-part series on the Foreign Service, and he expressed anger with detractors who accused him of undermining Bush’s agenda — in fact, he called those accusations “bullshit,” but we couldn’t print that, even though he’d said it was “quotable.”

Still, I built the whole story around that theme, and he wasn’t happy about it. He told me so himself on a flight from Islamabad to Kabul, and that moment was captured on the above photo.

I’ve seen Powell several times since he left office, though not since last year’s White House Correspondents Dinner at the Washington Hilton. I’ve also been to his office in Alexandria, Va., from where his trusted assistant Peggy Cifrino runs most of his post-government life. He is on several boards and often gives speeches around the country and abroad.

From time to time, he resurfaces in the media — usually, on Sunday morning TV shows, as he did to endorse Barack Obama for president in 2008, or on CNN’s “Larry King Live,” where he appeared this week.

He stays very informed about current events and reads most foreign-policy stories in the press. Sometimes, he sends the reporters he knows comments about their articles, mostly to correct what he perceives as inaccuracies.

In 2008, I was surprised to receive an e-mail message while I was in Singapore with Rice, covering the annual meeting of foreign ministers from the Association of Southeast Asian Nations (ASEAN). In one of my stories, I’d mentioned in a brief sentence at the end of a paragraph that Powell met with the North Korean foreign minister in Jakarta in 2004. My editor had changed “met” to “had coffee,” and Powell thought that inaccurately diminished the meeting’s importance.

I have a soft spot for Albright, not only because she was the first secretary of state I knew personally, but also because she has been very helpful to me — and she is a lot of fun.

I first met her in an ornate suite at New York’s Waldorf-Astoria hotel in 2000, while working on a profile of her for the Financial Times. Then I went on a trip with her to Europe and the Middle East — the first time I traveled on the secretary’s plane. We were flying when word came that Slobodan Milosevic had been driven out of power in Belgrade. I was surprised when she winked at me during a press conference in Egypt, but later I learned that she had winked at other reporters before.

When I got a job offer from the Washington Times in 2001, I was concerned about the newspaper’s affiliation with the Unification Church, so I asked Albright for advice. She pointed out that the Times had a stellar foreign coverage, and she didn’t see anything wrong in working there.

Over the years, she’d send me her newly published books with lovely inscriptions, writing “You are a star” in one and calling me “one of the outstanding journalists of our time” in another. In 2002, we had breakfast in her native Prague during a NATO summit.

At 73 — the same age as Powell — Albright is astonishingly active and extremely busy. She owns and runs two companies, travels around the world all the time and is involved in many projects. She recently chaired an expert group tasked with drafting a new NATO strategic concept. She is also chairman of the National Democratic Institute.

In October 2008, a couple of weeks before the last presidential election, I invited Albright to meet with the Washington Times editorial board. We left together from her office and she drove to the Times’ building in Northeast D.C.

During the ride, she said she was tired of people asking her who would be Obama’s secretary of state, because she wasn’t close to him and had no inside information. I suggested it would be fun for the press corps if Hillary Clinton got the job. Albright, who has been a good friend of Clinton’s since the mid-1990s, said: “It’s not gonna happen.” Of course, Clinton herself was shocked when Obama offered her the position weeks later.

We had a wide-ranging discussion about various foreign-policy issues during the meeting, and one of the things Albright said was that she opposed a deadline for withdrawing U.S. troops from Iraq. The Clinton administration’s experience in the Balkans had taught her that the president shouldn’t commit to a specific date not to tie his hands.

The Times’ executive editor at the time, John Solomon, thought our headline should be that Albright disagreed with Obama, who had proposed a deadline. I tried to write a story based on the facts without a “gotcha” element, but Solomon thought my lede wasn’t strong enough and wrote it himself.

Albright, who flew to Nevada to campaign for Obama the next day, was furious. Even though she and her aides have assured me it’s all in the past, things between us haven’t been the same since then. As thick of a skin she claims to have, she clearly still holds a big grudge against me, which she seems to have shared with other people.

Powell: “I am on the president’s agenda’

Political punch in a package of charm