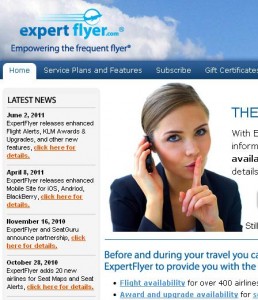 The transparency of raw airline data in recent years has been hugely important for our ability to secure the lowest fares and build the best itineraries. ExpertFlyer.com has been a pioneer in that endeavor, and now it has taken an extra step by showing government, military and other fares that have long been a mystery to most travelers.

I first began using ExpertFlyer soon after the website launched in 2005, and was happy to pay the $100 annual fee because it has helped me save thousands of dollars.

Last year, when I left the Washington Times and started teaching seminars, I naturally decided to use the site in my classes — and I received a complimentary subscription. In the interest of full disclosure, ExpertFlyer also donated $1,000 to the book tour I’m currently on. That said, I’m not at all obligated to promote the site in this column.

I’m writing about ExpertFlyer because of its usefulness to my readers. As I explain in my book, “Decoding Air Travel,” unless you are a travel agent or otherwise have access to a Global Distribution System (GDS), you are deprived of viewing raw airline data, such as fare tariffs and flight inventory, as it’s published by the carriers — but before it’s processed by automated booking engines.

This week, ExpertFlyer made available special government and military fares, as well as student and senior fares. The last two were not exactly secret in the past and could be searched on airline websites and online travel agencies, but having access to the raw data is no doubt very useful.

Being able to see government fare data, however, is a big deal. Only federal agencies can book tickets at those fares, but even if you never benefit from them, the information is rather revealing for an air travel geek like me.

The most significant feature of government fares is that they are usually much higher than the lowest regularly published fares, because they are fully refundable and changeable — but they are much lower than the normal full-fare prices available to businesses and consumers. Some companies do negotiate contracts with airlines, but the discount they get is typically between 5 and 15 percent.

Let’s look at the current government fare from Washington to Frankfurt on United — a heavily traveled route by federal employees. Because those flights are less than 14 hours long, only coach tickets are allowed. As of today, the base fare is $718 each way ($1,436 round trip) — the fare basis is YCA, which means it’s a full Y fare, earning 150 percent frequent-flier miles and requiring fewer miles to upgrade than discounted fares, and of course no cash “co-pays.”

Now let’s compare that to the lowest published Y base fare available to any of us — it’s $4,037 round trip. These are only the base fares, but as I learned a couple of months ago when I flew on a YCA fare for the first time, the government also enjoys a big discount on fuel surcharges, which run in the hundreds of dollars.

It’s worth noting that the lowest published United fare from Washington to Frankfurt as of today is $603 round trip, but it’s very restrictive and, of course, nonrefundable. United publishes the same transatlantic fares as Star Alliance partners Lufthansa, Air Canada and British Midland, but any flights on foreign carriers must be booked as United code-share numbers under the so-called Fly America Act. The same rule applies to American and its Oneworld partners, as well as Delta and other SkyTeam carriers.

In addition to the Y government fares, U.S. airlines have begun offering equally nonrestrictive fares with fare bases that book into discounted booking classes, such as L and K. Their downside is that they don’t earn bonus miles and upgrades on them are much pricier.

I’m still learning the government airfare system, but one thing I find hard to understand is why Carlson Wagonlit, the travel company that books travel for several federal agencies, charges almost $90 every time one of its agent touches a reservation — whether to issue a ticket, change it or cancel it. So much for “free” changes and cancellations.