HomeRound the world in a week, without pain 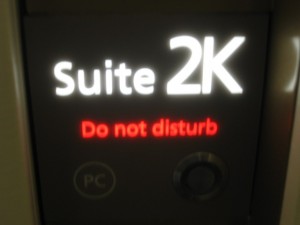 The first thing I have to say is that I don’t drink coffee or take sleeping pills. My only medicine when it comes to air travel is securing the best comfort and luxury I can — I need my flat beds, gourmet meals, lounges with showers, and sometimes even chauffeur-driven cars to connecting flights. I certainly can’t pay for them, but we’ll come to that momentarily.

Second, if you are going to circle the planet in a week, fly to the east, not the west. As much as I dislike those overnight flights from the U.S. East coast to Europe, because they are too short to get decent sleep, moving in that direction is much better in terms of adjusting to time differences. I was never jet-lagged during or after my journey.

The trip, which was blessed by the State Department, was part of the final research phase for my upcoming book on the U.S. Foreign Service, “America’s Other Army,” during which I visited the U.S. embassies in France, Thailand and Pakistan. Overall, I’ve visited almost 60 diplomatic and consular missions for this project, which began with my 2004 newspaper series, and interviewed more than 600 diplomats and other officials.

I used frequent-flier miles, but instead of getting what would have been a very expensive and restrictive round-the-world ticket, I issued two one-way tickets: One in First Class from Washington to Asia over the Atlantic, with a 24-hour stop in Europe, and another one in Business Class from Asia back home over the Pacific.

As I wrote in my first book, “Decoding Air Travel,” the best use of miles is for premium cabins. But why did I book First Class on the outbound for 80,000 miles, and not Business for 60,000? When I use miles, I make an effort to fly on the world’s best airlines. Of those, on my departure date Lufthansa was the only option, but it has some of the worst Business Class seats in the civilized world. First Class, on the other hand, is quite good, except for the small TV screen — that’s not the case with a few aircraft that have the new First seats with much bigger screens.

The more important reason for choosing First Class, however, was Thai Airways, which operates its Paris-Bangkok flights on planes leased from India’s Jet Airways that have private cabins with sliding doors in First. I had flown in one of those cabins from Tokyo to Bangkok a couple of months earlier and wanted to experience a much longer flight in such luxury. In addition, Thai Airways offers First Class passengers complimentary full-body massages in its Royal Orchid Spa at the Bangkok airport.

My Lufthansa flight from Washington to Munich was excellent, as expected, with top-notch flight attendants, which can’t be said of the ground staff at Dulles airport. I liked the new design of the pajamas they give First Class passengers. The food was consistent with my previous experiences, including the signature black caviar and several other appetizers. Although the seats are rather old by now, I always found the bed very comfortable.

I broke my habit of not having breakfast on overnight flights to Europe so I could have enough time for a shower in the First Class lounge in Munich before my connecting flight, since I had a full schedule as soon as I arrived in Paris. When it was time to board, I was whisked to my Paris plane in a Porsche.

The ambassador to France, Charles Rivkin, one of the best non-career ambassadors I know, couldn’t have been a better host, opening the doors of both his embassy and residence, and having a dinner in my honor, according to the elegant menu, with some of the top French journalists. My 24 hours in Paris were very productive, thanks to everyone I met, and especially spokesman Paul Patin, who put together my schedule at a very short notice.

It was time for the 11-hour flight to Bangkok, which didn’t disappoint, except for turbulence during most of it — and a 90-minute delay because of a flight attendant who fell ill just as we prepared to take off. After great meals, three films and a few hours of sleep behind closed doors, I was met by a Thai representative upon arrival in Bangkok and driven in a gold cart to the First Class lounge, where I took a shower before heading to the embassy.

Another full day of meetings and interviews followed, including two sessions with Ambassador Kristie Kenney, a career Foreign Service officer and one of the most capable, according to her colleagues — I hadn’t met her before. With the help of embassy spokesman Walter Braunohler, I covered enough ground with employees in several embassy buildings. The only slightly unpleasant part of the day was the 90°F temperature, especially after 20°F in Paris just hours earlier.

There was no time for a massage at the airport in the morning, but I managed to squeeze one in just before I flew to Islamabad in the evening. Unlike my plane from Paris, most Thai aircraft have old unimpressive seats in Business Class — and no First Class. Still, the food and service were up to standard, and I got some sleep before my 10:30 p.m. arrival in Pakistan.

My visit to Embassy Islamabad was the longest part of the trip — two full days and nights — and I was hosted by Ambassador Cameron Munter, whom I’ve known for eight years and consider one of the most brilliant serving U.S. diplomats. I also think he has possibly the most challenging job in the Foreign Service. He has assembled an outstanding team at the embassy, which actually surprised me, given the perception in Washington that few good officers volunteer to serve in Pakistan.

Munter went out of his way to accommodate my research needs, as did his chief of staff, Scott Kofmehl, with help from embassy spokesman Mark Stroh and many others.

On my flight back to Bangkok, I managed to get one of the embassy employees on a coach ticket into Business Class, thanks to an oversold Economy cabin. I had a long enough layover in Bangkok for a light breakfast in the lounge, some work and a foot massage, which is offered to Business Class passengers.

Then my Thai flight to Beijing had a significant mechanical delay, causing me to miss my connection to Washington on United Airlines.

While the Thai staff in the Business lounge scrambled for two hours to find an alternative way to get me home, I decided to apply in practice one of the things I preach in “Decoding Air Travel”: How to turn a negative airline situation into a positive one. In any case, I was looking at an arrival in Washington more than 12 hours later than scheduled, so the goal was to minimize my delay and stay in Business Class — preferably on an airline that has fully flat beds.

Korean Air met those requirements, and I added to my list a very good airline I’d never flown before — in fact, the 52nd carrier on that list. Korean Air is not in the Star Alliance, but to their credit, the Thais agreed to pay the Koreans a full Business Class fare in order to accommodate me, even though I was on an award ticket. They also agreed to let me spend the remaining 10 hours before my flight to Seoul in the First Class lounge, where I had a great lunch, did more work and slept for a few hours in a real bed, in one of their sleeping rooms.

Of course, they wouldn’t have done any of those things had I not been insistent — actually, a pain may be a better description. But I felt it was their fault, and they were responsible for rectifying the situation. I also knew they wouldn’t offer any compensation — Asia doesn’t have the rules Europe, and to some extent the United States, have — so I had to get whatever I could in other forms.

To sum up, my weeklong round-the-world trip didn’t wear me out — and now you know why.