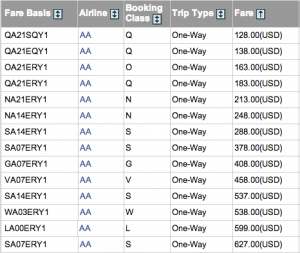 American Airlines’ fare tariff between Washington and Los Angeles, as of 1 p.m. on Dec. 13, 2012. Source: ExpertFlyer.com

American Airlines’ roll-out of a new bundled fare structure this week has created some confusion among frequent fliers about what the change means to the way they book tickets. They have nothing to worry about — at least for now. American is not changing the decades-long practice of how fares are published on an airline tariff, and fears of a lack of transparency are misplaced.

You can still see in which booking class your ticket will be issued, though it’s indeed a bit confusing how exactly one would know the difference between the three new fare types by looking at that booking class, which could be the same for all three fares. So let’s break all this down and try to make sense of it.

First, what has American changed? It has bundled products and services that airlines have been unbundling for a few years, though some of those extras like certain seats are still sold separately. When you search domestic fares in the contiguous 48 states on its website, you now get three tabs: lowest fare, refundable (both coach) and Business/First Class. The default tab is lowest fare. In that category, there are three types of fares, as shown below for a one-way trip from Washington to Los Angeles.

“Choice” is the lowest available fare, with all the usual restrictions like being non-refundable and incurring a $150 change fee. “Choice Essential” is $34 higher each way and offers a change-fee waiver, though a fare difference may apply, and one free checked bag. “Choice Plus” is another $10 higher each way and also includes 50 percent bonus miles, same-day flight changes, depending on availability, and an alcoholic drink on flights where alcohol is served.

As you can see in the above image, all three fares are booked in Q class, and the price differences are fixed regardless of whether you are on a nonstop or connecting flights — the route doesn’t matter, either.

So you are essentially paying a base fare of $128 each way (plus $11 in taxes) in all three cases, as shown in the first image from ExpertFlyer.com under the headline above, which is the American tariff between Washington and Los Angeles. There is another Q fare on the tariff of $138 each way, but it has nothing to do with the new bundled structure — it’s still the most restrictive, but the difference is that it’s valid on any day of the week, while the $128 is valid only on Tuesdays and Wednesdays. There is even a third Q fare of $183, below the O fare, but again it’s just a base fare with all the usual restrictions — but unlike the other two, travel doesn’t have to completed by March 20, 2013.

What’s the conclusion? American continues to publish fares in the same way the industry has been doing for decades. When you search flights, you get a seat in the lowest available booking class — or fare bucket — which in this case is Q. The type of bundle you are buying doesn’t change the booking code, which is important if you are upgrading or if you are on a waitlist. In other words, there are no separate fare buckets of inventory in the more expensive bundles. If you’ve read “Decoding Air Travel,” you know that airlines don’t always offer the lowest available fare, but that’s another issue.

Now, if the booking class is the same, how do the airline system and American agents know that you paid more and are entitled to a change-fee waiver and other benefits? In theory, that should be seen in the so-called fare-basis code, which is the several-character code in the first column on the tariff, as shown in the ExpertFlyer image.

However, American is not publishing the fare bases for “Choice Essential” and “Choice Plus” on the tariffs it sends to Global Distribution Systems (GDS), which traditional and online travel agencies use — at least not yet. The carrier tells me that those codes can be seen by its agents. On the tariff, you can see that all fare bases end with the number 1. I’m told that fare bases ending with 2, 4 or 6 indicate “Choice Essential” fares, and those ending with 7, 8 or 9 indicate “Choice Plus” fares.

The only way you would see what you paid for is on your ticket receipt, which should say “Total price includes Choice Plus.”

I don’t mind American not publishing all these fare bases on its tariff — it’s much less confusing, especially when you know exactly how much more “Choice Essential” and “Choice Plus” cost on every single route. The question is: Will travel agencies be able to book the new bundles if the data they receive through a GDS doesn’t include those additional fare bases on the externally published tariff?

Currently, the new fare structure is available only through American’s direct channels and doesn’t apply to international fares or those to Hawaii, Alaska and Puerto Rico.