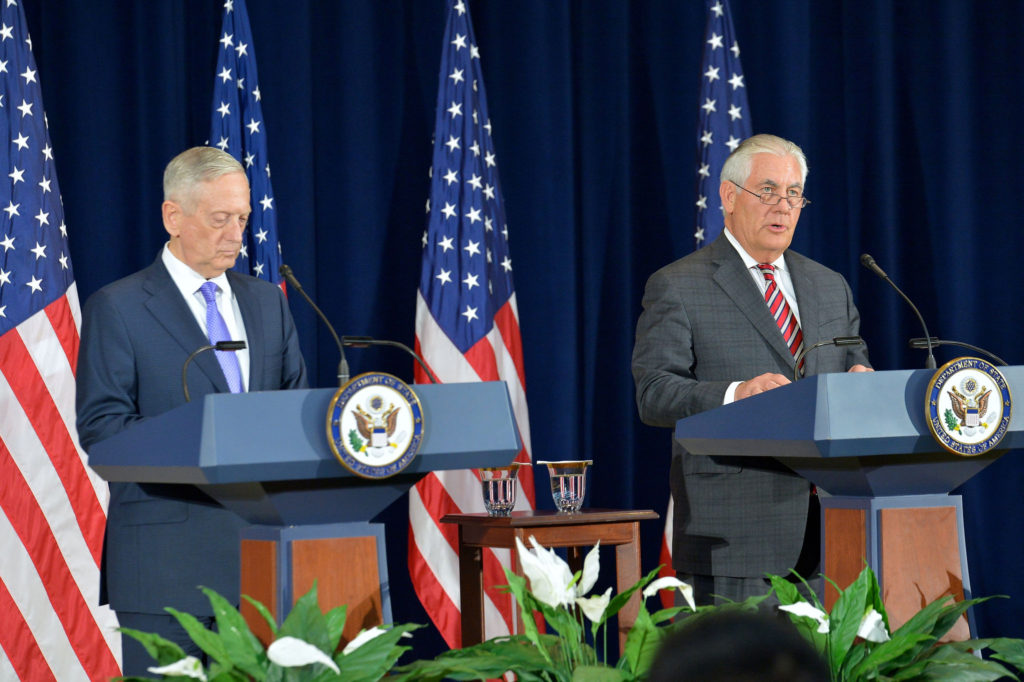 As Susan Johnson watched recently how Defense Secretary James Mattis spoke to a small group of American soldiers overseas, she admired his leadership and wished someone could do the same for the civilians on the front lines of national security in the U.S. Foreign Service.

A retired career diplomat and former president of the American Foreign Service Association, Johnson was among more than 3 million viewers of a video posted on Facebook, in which Mattis’ comments were seen as a rebuke of President Trump. “You just hold the line until our country gets back to understanding and respecting each other, and showing it,” Mattis told the troops. “The power of inspiration — we’ll get the power of inspiration back. We’ve got the power of intimidation, and that’s you, if someone wants to screw with our families, our country and our allies.”

The power of inspiration is usually the purview of diplomats, but they haven’t been feeling it too much of late. By now, many in the Foreign Service have concluded that Secretary of State Rex Tillerson, a former oil executive without previous government experience, will not provide the leadership they expect from their political boss. They point out that they are not holding Tillerson to the same standard as Mattis, a retired Marine Corps general — “the service with the steepest ladder to general, and the service for which taking care of its people is an article of the highest faith,” as one diplomat noted.

Still, the Foreign Service’s disappointment with Tillerson has been profound, as he embraced the White House’s push for cutting one-third of the State Department budget, oversaw the dismissal or departure of some of the country’s most senior career diplomats and limited interaction with those who remained to a minimum. “Our best secretaries all went to bat for us to get resources and make sure there was a policy process that included the career people,” said a career ambassador with more than three decades of service, who asked not to be named, citing the sensitivity of the matter. “What has this one done? Acquiesced to a 30-percent budget cut and the steady loss of our most experienced officers.”

Absent leadership from the top, some in the Foreign Service have begun looking inward. But what they are finding there is not sufficient, either, they said. “Courage and leadership are always in short supply everywhere, but with senior officers either bailing or being shoved out, there are few leaders left in the professional ranks,” said Ronald Neumann, a former career ambassador to Afghanistan, Bahrain and Algeria.

The current leadership vacuum has exacerbated a long-term problem, said both Neumann and Johnson. “The Foreign Service has had no leadership as a service for a long time,” Johnson said. “Sadly, it’s not a recent development, but rather a persistent condition for the last two decades.” While many senior officers have risen to assistant secretary and undersecretary positions, which are often filled with political appointees, and may have done an excellent job in those posts, they haven’t necessarily been service leaders, she noted.

Several current and former diplomats pointed out that, unlike the military services, whose chiefs of staff are always career professionals working alongside the politically appointed secretaries, the structures of the State Department and the Foreign Service have no built-in formal service-wide leadership roles for career officials. “You can still have inspiring leadership at embassies, but we are so dispersed around the world that it’s very difficult to have one person or a group of people as service leaders,” said a mid-level officer, who also asked for anonymity. “We’ve had great leaders at overseas posts, but it usually stops at the embassy level. It’s hard to exert influence beyond where you are at that moment.”

Johnson also blamed for the lack of internal service leadership the State Department’s approach to personnel issues and career development in recent decades. “The generation that moved into the senior ranks in the last 20 years was not developed with any sense of responsibility for stewardship of the Foreign Service,” she said. “The incentives were all directed at rewarding individual career advancement.”

Decades ago, the director-general of the Foreign Service was its “chief steward,” Johnson said. In 1975, however, the post was “downgraded and became double-hatted,” as the incumbent was also named director of human resources for the entire State Department, including the Civil Service, whose members are hired for domestic positions. Since then, while the directors-general have remained career diplomats, they have tended to spend most of their time on personnel issues, rather than focus on the big picture and tackle strategic challenges.

Neumann said the problem is not so much in the role of the director-general as in the appointment of officers who have been ambassadors in a small embassy, not the service’s most experienced members. “We have rarely had in recent years directors-general with real gravitas,” he said.

As for other senior State Department posts, the undersecretary for political affairs has traditionally been the most senior career diplomat and the one closest to the secretary of state. But in recent years, that post has sometimes been occupied by political appointees. Even when career officials hold it, they are so focused on policy that they find little time to think about the Foreign Service and its future, several officers said. Then there is the undersecretary for management, but that post often goes to political appointees as well — and the daily management of what has become a monstrous global bureaucracy doesn’t leave time for much else.

It’s ironic that the Foreign Service has relied on leadership from political bosses for so long, given its reputation, albeit inaccurate — especially among conservatives — as an elite club of liberals who are disloyal to Republican presidents. Another irony is that the two secretaries of state most often cited as the best caretakers of the service by its members, George Shultz and Colin Powell, are both Republicans, having served in the Ronald Reagan and George W. Bush administrations, respectively.

“Only senior State Department leaders can provide true leadership, starting with the secretary,” said a senior officer serving overseas. “Only Tillerson can address the perception that, not only doesn’t he and his inner circle listen to us, they prefer we weren’t there. We’ve been through such episodes of denigrating the career service from members of Congress, but never from an administration.”

Even in the current environment, several officers said that career diplomats should be tenacious in proving their value to their political bosses. “We need to cultivate a reputation for competence and professionalism, and to convince the political class that we are useful, if not in fact necessary, if they are to succeed in their occasional and temporary possession of constitutional executive authority,” said Edward Marks, a retired senior Foreign Service officer.

“With all the disparate foreign policy interests of the U.S., a strong State Department is necessary to take a holistic view and bring policies together,” Neumann said. “Without leadership, this will default to the National Security Council and scatter among various cabinet departments, but none of them can fully manage the necessary implementation in the field.”