Is That Quality Amid the Package? 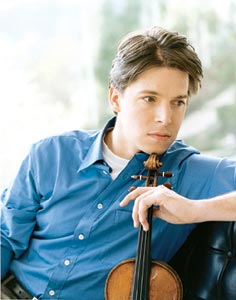 NEW YORK — Joshua Bell never meant to help redefine the image of the classical musician, but he might have done just that. For this acclaimed young violinist, who has performed with the world’s leading orchestras, is also renowned for his film-star looks, addiction to online stock trading and his passion for computer games.

He moved to New York in 1989 and his apartment sprawls across an entire floor with a view of the Empire State Building. Bell, tall and slim with a face that makes him look younger than his 34 years, is sitting on a black leather sofa dressed in a black T-shirt and jeans.

He witnessed the World Trade Centre tragedy on September 11 from his roof, and has since taken part in concerts and TV programmes in memory of the victims. He performed at a Red Cross shelter and the Riverside Church in New York, as well as on public television’s Great Performances series.

The publicity surrounding Bell’s “extra-curricular” activities helps sell his albums, but has turned him into a commercial commodity. “The worst part is that, when I see something packaged around superficial things — like looks or what car you drive — initially assume there is no quality there,” he says.

“We’ve seen musical acts and other things packaged in a way that they become popular only because of the marketing machine behind them. So then I have to prove myself in what I do.”

Although he won a Grammy this year for a new violin concerto written for him by British composer Nicholas Maw, it was People magazine’s choice of Bell as one of the “50 most beautiful people in the world” in 2000 that garnered more attention. He was “flattered” but also “embarrassed” by the ranking — “what I do shouldn’t be about that”.

But Bell, who is scheduled to perform with the London Philharmonic Orchestra at the Royal Festival Hall next Wednesday, understands the marketing demands of the contemporary music business — three years ago he switched record companies from Decca/London to Sony Classical and immediately found himself in a flurry of activity unusual for a concert violinist.

He was a body double and performed on the soundtrack of the 1998 film “The Red Violin”, a tale of a fictional violin carried through three centuries and three continents, directed by Bell’s friend Francois Girard. The Oscar-winning score was composed by John Corigliano, who said in his acceptance speech: “Joshua plays like a god.“

Sony’s next project for Bell was a Gershwin programme. Gershwin wrote nothing of real solo substance for violin, but Sony contributed “Gershwin Fantasy”, a recording of various arrangements, to the 100th anniversary celebrations of the composer’s birth three years ago.

There followed a bluegrass CD called Short Trip Home, which was created in 1999 by Bell’s friend of 16 years, Edgar Meyer, and this year, Bell recorded “West Side Story Suite” — arrangements of Leonard Bernstein’s memorable tunes by Tony Award-winner William David Brohn and Corigliano, for which the violinist wrote his own cadenzas. He also performed parts of the album in open-air concerts in the US last summer.

Bell considers those not typical of his repertoire projects — known as “crossovers” — but just as “stimulating and serious” as Beethoven and Shostakovich.

“I don’t think of a lighter and heavier side,” he says, “although the word ‘crossover’ has a bad connotation of being something cheap and commercial. As a classical musician, you are constantly going between vastly different worlds.”

Although his favourite venue is his annual, week-long chamber series at London’s Wigmore Hall and its “intimate environment”, he is willing to take on projects that reach an audience unaccustomed to Bach and Prokofiev. But if he had to choose, he says, he’d rather be “a musician’s musician than a popular one, though I’m not convinced they have to be mutually exclusive”.

Bell honed his craft at the University of Indiana’s school of music, in his home town of Bloomington. His violin teacher since the age of 12 — he took up the instrument at five — was Josef Gingold, a former concertmaster of the Cleveland Orchestra and native of Brest-Litovsk.

“I fell into it,” Bell says of playing the violin, “and I’m sure it’s what I do best. I didn’t know what to expect when I was starting out, but I did imagine that one day I’d play for an audience that would know who I was. Since I know the instrument so well now, I’d like to try writing solos.”

He recently bought a 1713 Stradivarius, named “The Gibson Ex Hubermann”. This is his third violin since he started playing.

“I practise two hours a day on average,” he says, as I calculate how much time that leaves him for his other interests. “But sometimes I wouldn’t do it for three or four days. I know how to use my time when I practise.”