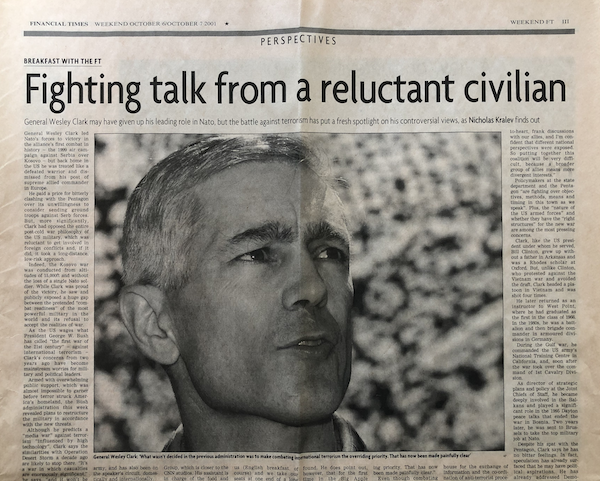 Fighting Talk From a Reluctant Civilian

WASHINGTON — General Wesley Clark led NATO’s forces to victory in the alliance’s first combat in history — the 1999 air campaign against Serbia over Kosovo — but back home in the US he was treated like a defeated warrior and dismissed from his post of supreme allied commander in Europe.

He paid a price for bitterly clashing with the Pentagon over its unwillingness to consider sending ground troops against Serb forces. But, more significantly, Clark had opposed the entire post-cold war philosophy of the US military, which was reluctant to get involved in foreign conflicts and, if it did, it took a long-distance, low-risk approach.

Indeed, the Kosovo war was conducted from altitudes of 15,000ft and without the loss of a single NATO soldier. While Clark was proud of the victory, he saw and publicly exposed a huge gap between the pretended “combat readiness” of the most powerful military in the world and its refusal to accept the realities of war.

As the US wages what President George W. Bush has called “the first war of the 21st century” — against international terrorism — Clark’s concerns from two years ago have become mainstream worries for military and political leaders. Armed with overwhelming public support, which was almost impossible to garner before terror struck America’s homeland, the Bush administration this week revealed plans to restructure the military in accordance with the new threats.

Although he predicts a “media war” against terrorism “influenced by high technology”, Clark says the similarities with Operation Desert Storm a decade ago are likely to stop there. “It’s a war in which casualties are enormously significant,” he says, “and it won’t be hands off, let’s go wipe out people to unconditional surrender.” The 1991 Gulf war, which lasted just over a month, had a clear target — something the war on terrorism is still missing.

“There is an old expression: ‘I have a hammer, find me a nail.’ But the problem is that, in modern war, it’s difficult to use the hammers,” he says. “If terrorism were a problem that could be solved by a hammer, we would have hammered it out a long time ago.”

Clark, who spends much of his time on the road these days, has stopped in Washington on his way to Europe, and I’ve been awarded breakfast in his packed schedule of television appearances. A reluctant civilian, he became an investment banker in his native Little Rock, Arkansas, after retiring from the army, and has also been on the speaker’s circuit, domestically and internationally.

The aftermath of the September 11 attacks on New York and Washington has added a new engagement to Clark’s already full plate: military consultant for CNN. Having been in a position that requires telling the media as little as possible about military strategy and operations when he was at NATO, he is now given the task of telling a global audience what goes on behind the scenes at the White House and the Pentagon.

“You have to draw lines,” he says of his new undertaking. “I’m here to help the public appreciate and understand, but I’m not going to reveal classified information or second-guess military commanders in the field.”

Clark has moved our rendezvous, initially planned at his hotel, to the Washington office of the company he now works for, the Stephens Group, which is closer to the CNN studios. His assistant is in charge of the food and drinks, her job made easier by the fact that neither of us is a coffee fan.

I’m shown into a spacious conference room facing the Capitol, and a minute later Clark dashes in with a soldier’s “Good morning!” and a broad smile. At 56, he looks at least five years younger, in spite of his grey hair — instead of his old uniform, he is now wearing an elegant, long-sleeved, light-blue shirt, a yellowish silk tie, a dark-grey pair of trousers with a visibly expensive belt, and impeccably shiny black shoes. He makes tea for both of us (English breakfast, of course) and we take our seats at one end of a long table, carefully laid by his assistant, who has brought three kinds of doughnuts and blueberry Danish pastries. He pours a bottle of soda into a glass full of ice. I refrain — I never understand why Americans consume so much ice anyway.

“I’m just back from New York,” Clark tells me, as he puts a piece of Danish on his plate and starts digging in with his fork. However, he declines to elaborate on the devastation he saw at “ground zero”, where thousands of bodies still lie under the massive ruins and will probably never be found. He does point out, however, that for the first time in the Big Apple “people look at each other”.

Clark himself is a person who looks you in the eyes while speaking. He has the reputation of being focused and thorough in everything he does, as well as thoughtful and intense. He is also frank in voicing his opinions — too open, some say, pointing to his dismissal from NATO. That said, many people who have worked with him in government describe him as a good team player who always tried to bridge the gap between the military and civilian communities.

He says he has “great confidence in the US military” and its ability to win “the new kind of war”. In fact, “the work against terrorism has deep roots but what wasn’t decided in the previous administration was to make combating international terrorism the overriding priority. That has now been made painfully clear.” Even though combating terrorism was included as one of NATO’s missions in its new strategic concept adopted at the 50th anniversary summit in Washington in 1999, Clark acknowledges the alliance’s limited capabilities when it comes to going after terrorists.

“The problem is that fighting terrorism is a function of getting information,” he says. “NATO doesn’t have its own information-collecting sources — it depends on states, and for them to acquire information it’s normally more efficient to work bilaterally. But I believe that NATO has the potential to be a very important clearing house for the exchange of information and the co-ordination of anti-terrorist procedures.”

Modern war, says Clark, has four main elements, as far as the US is concerned: media and public relations, working with allies, balancing policy between the State Department and the Pentagon, and flexibility and adaptability of the armed forces. He makes those points in his new book, “Waging Modern War” (to be published in Britain later this month), which is based primarily on the Kosovo conflict, but he argues that all elements are also present in the war against terrorism.

“You can be sure that there have been heart-to-heart, frank discussions with our allies, and I’m confident that different national perspectives were exposed. So putting together this coalition will be very difficult, because a broader group of allies means more divergent interests.”

Policymakers at the State Department and the Pentagon “are fighting over objectives, methods, means and timing in this town as we speak”. Plus, the “nature of the US armed forces” and whether they have the “right structures” for the new war are among the most pressing concerns.

Clark, like the US president under whom he served, Bill Clinton, grew up without a father in Arkansas and was a Rhodes scholar at Oxford. But, unlike Clinton, who protested against the Vietnam war and avoided the draft, Clark headed a platoon in Vietnam and was shot four times. He later returned as an instructor to West Point, where he had graduated as the first in the class of 1966. In the 1980s, he was a battalion and then brigade commander in armoured divisions in Germany. During the Gulf war, he commanded the US army’s National Training Centre in California, and, soon after the war took over the command of 1st Cavalry Division.

As director of strategic plans and policy at the Joint Chiefs of Staff, he became deeply involved in the Balkans and played a significant role in the 1995 Dayton peace talks that ended the war in Bosnia. Two years later, he was sent to Brussels to take the top military job at NATO.

Despite his spat with the Pentagon, Clark says he has no bitter feelings. In fact, speculation has already surfaced that he may have political aspirations. He has already addressed Democratic and Republican fundraisers in his state, and last month he was spotted lunching with Ron Oliver, chairman of the Arkansas Democratic Party.

“I haven’t ruled anything out,” says Clark, who defines himself as a political independent. “I’m interested at some point in public service. I’ve got a lot of ability and experience in terms of national security. But I also did a lot in the military in terms of looking after families, education and health care, building communities. So I’m interested in all aspects of where our nation is.”