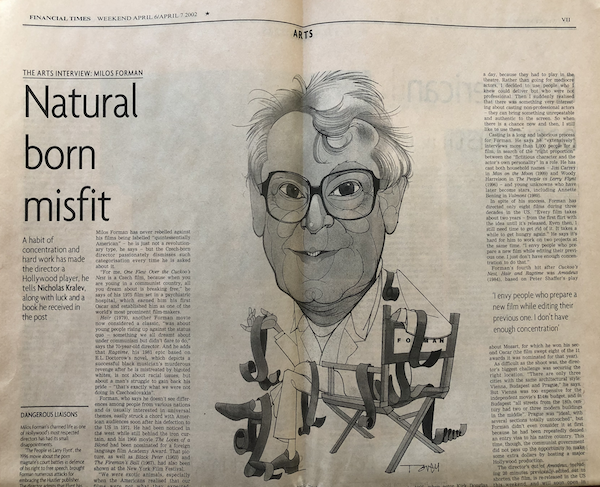 NEW YORK — Milos Forman has never rebelled against his films being labelled “quintessentially American” — he is just not a revolutionary type, he says — but the Czech-born director passionately dismisses such categorisation every time he is asked about it.

“For me, ‘One Flew Over the Cuckoo’s Nest’ is a Czech film, because when you are young in a communist country, all you dream about is breaking free,” he says of his 1975 film set in a psychiatric hospital, which earned him his first Oscar and established him as one of the world’s most prominent film-makers.

“Hair” (1979), another Forman movie now considered a classic, “was about young people rising up against the status quo — something we all dreamt about under communism but didn’t dare to do,” says the 70-year-old director. And he adds that “Ragtime”, his 1981 epic based on E.L. Doctorow’s novel, which depicts a successful black musician’s murderous revenge after he is mistreated by bigoted whites, is not about racial issues, but about a man’s struggle to gain back his pride — “that’s exactly what we were not doing in Czechoslovakia”.

Forman, who says he doesn’t see differences among people from various nations and is usually interested in universal themes, easily struck a chord with American audiences soon after his defection to the US in 1971. He had been noticed in the west while still behind the iron curtain, and his 1966 movie “The Loves of a Blond” had been nominated for a foreign language film Academy Award. That picture, as well as “Black Peter” (1963) and “The Fireman’s Ball” (1967), had also been shown at the New York Film Festival.

“We were exotic animals, especially when the Americans realised that our films were not what they expected: socialist realism and communist propaganda,” Forman recalls with amusement. “Back home, the censorship always aimed us at what exactly we had to talk about — what they didn’t like was our subject. We had to use artistic language to fool them. It was a good education.”

Having witnessed some of the ugliest moments of the civil rights movement in the US, where he was preparing to direct his American debut at the time of Martin Luther King’s assassination in 1968, Forman left in search of a more peaceful working environment in Paris. But the history-making student protests erupted soon after his arrival and he returned to Prague. Soviet tanks wouldn’t roll into Czechoslovakia until he was back in France, but something in the atmosphere made him sense the end of the more liberal leadership of Alexander Dubcek.

When in 1971 he completed his first film in the US, “Taking Off”, which was a flop, Forman asked the Czechoslovak authorities to extend his exit visa so he could remain in New York a bit longer. After they refused, unless he went to get his passport stamped back in Prague, he chose life under capitalism forever.

Forman, who has just embarked on a new project based on Donald E. Westlake’s novel “Bad News”, always thought of himself as a show business natural. “I was fascinated with movies and theatre as a child,” he says. “I saw my first film at six, and then I didn’t see anything until I was 13, since during the war nobody would give me money to see Nazi propaganda. My brother, who is 13 years older, was working as a set designer for a travelling operetta company. Every time they came to my hometown (Caslav), he took me backstage. That gave me the bug. I loved the smell of make-up and the glamour of the theatre.”

If those early experiences contributed to his taking up directing later, so did the way he was brought up, by relatives and family friends, after his parents died in Nazi concentration camps. In his 1994 memoir, “Turnaround”, Forman describes himself at the age of 10 as “a kid who is never given the time to fit in anywhere, who is kept outside the emotional core of other families. It’s the emotion of standing by a glasshouse and seeing everything that goes on inside, but never touching it, never being touched by it”. So he learnt to keep a low profile, observe everyone and everything carefully and never draw attention to himself — most of what makes a good director.

Concentration and hard work bear half of the responsibility for his success, Forman says. “The other 50 per cent is luck — you have to open the right door at the right moment.” His own lucky moment came in 1966, when actor Kirk Douglas visited Prague on a goodwill mission. “They showed him some films, including one of mine, and at a party afterwards he asked me if he could send me a book called ‘One Flew Over the Cuckoo’s Nest’, which could possibly be turned into a movie.”

The book never arrived, although Douglas later insisted he had sent it, but eight years later a peculiar coincidence occurred. Already in New York, the director received the same book in the post, but from Douglas’s son, Michael, and Saul Zaentz, both of whom would later produce the film, which starred Jack Nicholson. Michael claimed he had no idea his father had sent the same book to the same director.

In “Cuckoo’s Nest”, Forman continued a practice he had begun in Czechoslovakia: using non-professional actors. “I used to shoot my films outside of Prague,” he explains. “If you wanted good actors, you could get them only for a couple of hours a day, because they had to play in the theatre. Rather than going for mediocre actors, I decided to use people who I knew could deliver but who were not professional. Then I suddenly realised that there was something very interesting about casting non-professional actors — they can bring something unrepeatable and authentic to the screen. So when there is a chance now and then, I still like to use them.”

Casting is a long and laborious process for Forman. He says he “extensively” interviews more than 1,000 people for a film, in search of the “right proportion” between the “fictitious character and the actor’s own personality” in a role. He has cast both household names — Jim Carrey in “Man on the Moon” (1999) and Woody Harrelson in “The People vs Larry Flynt” (1996) — and young unknowns who have later become stars, including Annette Bening in “Valmont” (1989).

In spite of his success, Forman has directed only eight films during three decades in the US. “Every film takes about two years — from the first flirt with the idea until it’s released. Even then, I still need time to get rid of it. It takes a while to get hungry again.” He says it’s hard for him to work on two projects at the same time. “I envy people who prepare a new film while editing their previous one. I just don’t have enough concentration to do that.”

Forman’s fourth hit after “Cuckoo’s Nest”, “Hair” and “Ragtime” was “Amadeus” (1984), based on Peter Shaffer’s play about Mozart, for which he won his second Oscar (the film swept eight of the 11 awards it was nominated for that year).

As difficult as the shoot was, the director’s biggest challenge was securing the right location. “There are only three cities with the same architectural style: Vienna, Budapest and Prague,” he says. But Vienna was too expensive for the independent movie’s $14m budget, and in Budapest “all streets from the 18th century had two or three modern buildings in the middle”. Prague was “ideal, with several sections totally untouched”, but Forman didn’t even consider it at first because he had been repeatedly denied an entry visa to his native country. This time, though, the communist government did not pass up the opportunity to make some extra dollars by hosting a major Hollywood production.

The director’s cut of “Amadeus”, including 20 minutes previously edited out to shorten the film, is re-released in the US this weekend, and will soon open in Europe.

Forman, having taken some artistic liberties in Amadeus and “The People vs Larry Flynt”, defends Ron Howard, last month’s Oscar winner for “A Beautiful Mind”, as well as other directors who have made biographical movies that do not strictly follow the facts. Howard has been criticised for leaving John Nash’s first child out of his film about the schizophrenic maths genius.

“Listen,” Forman raises his voice, “Mozart also had more than one child, but that didn’t make a big difference for the movie. ‘The People vs Larry Flynt’ is not about Larry Flynt. It’s about how far our freedoms can go and what it would take if we started cutting the extremes. We are not making a documentary, where we have to be absolutely true to the facts. When you make a feature drama, all you have to be faithful to is the spirit of the facts, which I don’t think we violated.”