HomeDelayed at the airport? Enjoy! 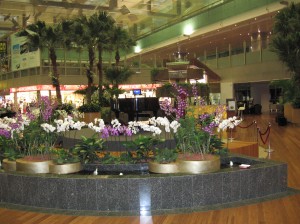 It may be difficult for many Americans to believe, given the state of U.S. airports, but there are airports in the world where one can enjoy spending time. I was reminded of that recently while waiting for a delayed connecting flight in Hong Kong.

Not only is the airport one of my two favorites, it was named best on the planet in a global survey released last month. It’s efficient, clean, easy to navigate and displays architectural finesse. My final destination on that trip was Singapore, my other favorite airport, which came in second in the survey of 8.2 million travelers conducted by Skytrax, a British research group.

“In recent years, the whole air travel experience has become much more focused on the time customers spend in the airport environment, and Hong Kong has established itself as a clear passenger favorite,” said Skytrax CEO Edward Plaisted.

Most travelers spend a long time at airports not by choice, but because their flights are delayed or the prospect of waiting in huge lines forces them to arrive too early. Thus, there are two main groups of passengers: those in a hurry and those with time to kill.

The first group usually cares only about getting to the departure gate quickly — either from check-in or from an incoming flight. That means having clear signs, speedy passage through security, immigration and customs, as well as short walking distances.

It’s a bonus if the airport passengers are dashing through is also clean and customer friendly. Those factors are more important to the second group of passengers, who need time to pass quickly — and walking around a tidy, spacious, well-decorated terminal definitely helps.

The planners of Asian airports seem to have understood all that better than their colleagues elsewhere. One only needs to remember the recent fiasco at London Heathrow’s new Terminal 5, while the seamless openings of terminals at Beijing Capital International Airport and Singapore’s Changi Airport were barely registered by Western media.

Those two state-of-the-art terminals have won praise around the world. In Singapore, a beautiful carpet and a rain-forest-canopy-like roof add to the coziness created by the design, and parts of the terminal resemble a botanic garden. The terminal also features luxurious business lounges and an elaborate playground.

None of the Washington area’s three main airports — Ronald Reagan Washington National, Washington Dulles International and Baltimore-Washington International Thurgood Marshall Airport — made the list this year. Dulles is consistently cited by travelers as one of the worst in the country because of difficult access, often lengthy security lines and particularly long waits in the immigration hall.

Whether you believe Washington belongs on the list or San Francisco doesn’t — travel forums on the Internet are buzzing with comments on the survey — most travelers would agree with the choice of the top two airports.

Hong Kong and Singapore have shared the top spots since 2000, with Hong Kong coming out on top every year except in 2000 and 2006, when Singapore won.