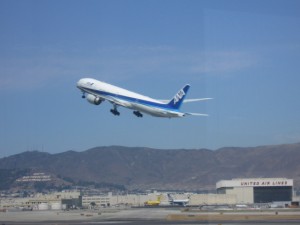 A Tokyo-bound All Nippon Airways plane takes off at San Francisco International Airport.

As if “award” plane tickets aren’t hard enough to come by, airlines are putting even more controls on those coveted seats — in some instances understandable, but in others apparently artificial and questionable.

Most major U.S. carriers are reporting record numbers of issued mileage tickets, but they are not a result of more available seats so much as more passengers rushing to beat rises of redemption mileage levels. As I wrote three weeks ago, the value of frequent-flier miles is dropping, and the airlines want them to be used up because they are a balance-sheet liability.

With most carriers’ domestic capacity shrinking between 5 percent and 16 percent this fall, the number of mileage seats will naturally be reduced as well. Most affected will be the cheapest or “saver” award tickets, such as those requiring 25,000 miles for a domestic coach round trip.

It’s understandable that, in these turbulent times, airlines are more careful than ever about how they manage what they call award inventory. Their primary goal is to sell their seats for cash, so they may wait until days or even hours before a flight to open up an award seat or an upgrade.

As frustrated as travelers have been when they can’t get a “free” ticket, even if their dates are flexible, most of us recognize that airlines have the right to manage their inventory in a way that makes the best business sense for them. They use complex methods to determine that, and no one knows better how to do it than each company.

United Airlines, however, has decided that, in addition to its own award inventory, it should “manage” that of its partners as well — more precisely, seats made available for booking with United miles by fellow members of the Star Alliance, a global network of 24 carriers.

“We manage award availability on our Star Alliance partners just as we do with United’s own saver awards,” said Jeff Kovick, a United spokesman.

Many members of United’s Mileage Plus program have been complaining in online forums about United’s “filtering” or “blocking” of award seats on flights operated by carriers such as Singapore Airlines, Asiana of South Korea and particularly Germany’s Lufthansa.

Noah Cole, a public relations manager from Portland, Ore., said he recently tried to book a trip to Italy. He checked the Web site of Japan’s All Nippon Airways (ANA), which offers the only online access to the alliance’s award “middleware” called StarNet, and saw availability on the Lufthansa flights he wanted.

“United could not find any seats in business or economy,” he said. “I knew from using the ANA award tool that there were seats available on Lufthansa, so I called US Airways,” also a Star member, and “they had no trouble finding seats.” He ended up using his US Airways miles. Another solution would be to book months in advance, before United applies the filters.

Last week, I randomly checked availability from Frankfurt to Munich, Lufthansa’s main hubs, for the weeks of Oct. 6 and Oct. 13. A United reservations agent couldn’t see a single seat on any of the 12 daily flights. The ANA tool showed availability on 10 flights a day on average. Several United agents tried to explain the discrepancy by saying that Star carriers give different award inventory to the individual alliance members.

But Martin Rieken, director of corporate communications for the Americas at Lufthansa, said that every Star partner makes the same inventory available on StarNet for any alliance member to use “on a first-come-first-served basis.”

“We offer each seat to every frequent-flier program and have no preference” who uses it, Mr. Rieken said. Both he and Mr. Klick noted that formal redemption agreements, covering issues such as mutual compensation, are negotiated bilaterally between carriers.

Asked why United feels a need to filter award seats after a partner airline has already decided to offer them, Mr. Kovick said: “It is an ongoing balance of ensuring we meet our customers’ interest in award travel on partner carriers with United’s need to generate revenue on our own flights.”