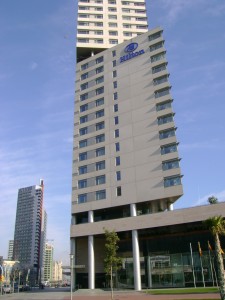 With airlines changing the rules of their frequent-flier programs to help improve their balance sheets, it was only a matter of time before hotel chains began to re-evaluate their own loyalty schemes.

Still, many travelers were surprised, confused and even angry when, earlier this month, Hilton Hotels Corp. announced two major changes to its program, Hilton HHonors. It made it more difficult to qualify for elite status, and it restricted access to so-called executive lounges at its high-end properties.

In 2005, Hilton pioneered a “rolling VIP tier qualification” system, which replaced the industry standard of requiring a certain number of stays or nights during a calendar year — from Jan. 1 through Dec. 31 — to win elite status.

Under the new rules, you could qualify at any time. You still needed 16 stays or 36 nights to become a gold member, and 28 stays or 60 nights for diamond over 12 consecutive months. But if you couldn’t achieve that by Dec. 31, you could do it in February or May — and not have to wait another whole year to enjoy the benefits that come with status.

At the time, Hilton said the new system was fairer to those customers who almost made it by year´s end, but not quite. Two weeks ago, however, it said that the “rolling” method was too confusing for its members, and it would roll it back beginning Jan. 1.

“In response to customer feedback, Hilton HHonors will soon institute an easy-to-understand calendar-year VIP qualification system, counting stays from Jan. 1 to Dec. 31,” the company said on its Web site.

The “rolling” scheme was indeed confusing for many HHonors members, as well as many Hilton employees. But some travelers didn’t buy the company’s explanation.

“They made the change under the guise that the rolling-tier qualification was too complicated to explain,” said Bob Erickson, a senior adviser to the Internal Revenue Service in Washington and a diamond Hilton member.

He said it became much easier to deal with the scheme once the company added a “wizard” to its Web site that showed how many stays and nights you’ve had for the past 12 months, and how many more you need by a certain date.

Stephen Anthony, a software product manager from Boca Raton, Fla., said that if Hilton wanted to keep the new scheme, it could have made it work. But “rather than train their staff to communicate and educate the customers, they opted to give up and declare the program too complex,” he said.

Mr. Erickson, who has extensive knowledge of hotel loyalty programs, said the more likely reason that Hilton made the change is the company’s balance sheet.

“The calendar system is very rigid, and fewer people will qualify for elite status,” he said. That means that fewer customers will use free benefits and earn bonus points, and “points are a liability on the balance sheet.”

Mr. Anthony, who “was on track to maintain gold status well into 2010 and even reach diamond,” cited the other major change that Hilton just announced as more evidence that the company has decided to restrict elite benefits. Unlike diamond members, he said, “gold members are no longer entitled to executive lounge access unless they receive an upgrade to the executive floor,” which is also becoming rarer.

The number of elite members has grown so much in the past several years — not unusual in the travel industry — that Hilton is trying to deal with that “dilution,” Mr. Anthony said. But Hilton shares some of the blame, he said, because it has given out complimentary status “through a plethora of co-brand marketing opportunities.”

Mr. Erickson, who owes his diamond status to such an opportunity — spending $40,000 on his Hilton HHonors U.S. properties better than Hilton’s. He pointed out, however, that Starwood’s and all other chains’ qualification period is also a calendar year, and Starwood gold members have never been entitled to executive lounge access.