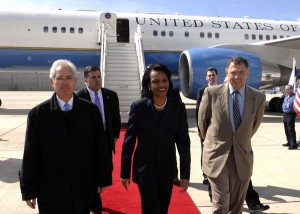 People often roll their eyes when I tell them that traveling around the world with the secretary of state is not that glamorous, but the waning months of an administration are a case in point.

Reporters are happiest when they cover good stories, and it has been a while since a trip by Condoleezza Rice, President Bush’s chief diplomat — or by Mr. Bush, for that matter — created real excitement among the press corps. Many news organizations have been skipping those trips lately, saving tens of thousands of dollars that were needed to cover a long and expensive presidential campaign.

When the diplomatic press corps does fly with the secretary, it is usually on a Boeing 757, which has a private cabin for the secretary up front with a pullout sofa bed. There are four such U.S. Air Force planes for use by the vice president, the first lady, senior Cabinet members and high-ranking congressional leaders. One of those aircraft sometimes becomes Air Force One if the president goes on a short domestic trip and taking a huge Boeing 747 makes little sense.

None of us forgets our first flight on one of those white-and-blue planes. Being on board is an honor and a major responsibility. It can feel somewhat glamorous at first, jetting from one country to another and being whisked away in a motorcade right off the plane, without the hassle of customs and passport control.

But you soon realize that comfort and glitz are not really part of the routine. The seats on the plane are not very comfortable, the food is not great, and you spend hours waiting around on the ground. The reason we pay the State Department thousands of dollars for these trips is the unparalleled access they provide to the secretary and other senior officials.

The department charges us full one-way coach fare between two cities, so air fare for an average trip with several stops can total between $6,000 and $8,000. There are usually about a dozen reporters on the plane.

The press pool on Air Force One is about the same size, but the White House charges first-class fare for those seats, totaling tens of thousands of dollars per trip. Typically, many more news organizations want to cover the president’s travels than his plane can accommodate, so the White House charters a separate aircraft for the rest of the press, which flies ahead of the president’s plane.

Commercial airlines bid for every trip through a broker, and the White House Correspondents’ Association and the TV networks decide which carrier to select, usually based on cost, said the association’s president, Jennifer Loven of Associated Press.

“We divide the estimated cost evenly, depending on how many people are on the plane,” she said. “Sometimes, people drop out, which happened on Bush’s trip to China for the Olympics. We ended up paying $50,000 per person, even though the initial bid was much lower. People were just dying. A more typical price tag is about $20,000.”

The good news for reporters flying on the press charter is that they are often awarded frequent-flier miles for those flights. “It’s not across the board,” Ms. Loven said, but most foreign trips are taken on United Airlines, which does offer miles. Many reporters achieve top elite status that way, although some of them don’t even know it.

More than 100 reporters go on “high-demand trips,” Ms. Loven said, for which United uses three-cabin aircraft. The seat assignments are made by the White House travel office, following a “policy agreed upon” by the association, said assistant press secretary Carlton Carroll.

The wire services and the TV networks “will always be assigned one first-class or forward seat,” according to the White House Policies and Procedures Manual. The rest of the press corps competes for premium seats, with preference “given to those who travel most frequently on White House press charters.” The reporters sitting in the coach cabin often have an entire row to themselves.