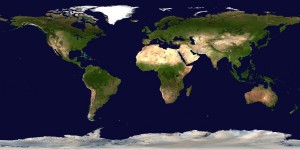 Have you ever taken a trip around the world or does that prospect sound too extravagant amid a global recession?

Despite a significant price increase that took effect Sunday, if you need or want to travel to several international destinations at a price much lower than regular published fares, a round-the-world ticket is the way to go.

Even if you think that round-the-world trips are only for experienced globe-trotters and not for you, keep the option in mind next time you book an overseas trip. Not only are round-the-world prices lower than separate one-way fares between two cities, but in some cases, they may also be lower than a round trip.

Different round-the-world fares are published for different countries, based on local market conditions. The price of a ticket originating in some countries is double that of a trip starting in others.

Two alliances offer the leading round-the-world products. Oneworld — which includes American Airlines, British Airways and Australia’s Qantas Airways, among others — determines its prices by the number of flights you take, regardless of their length. Fares on the Star Alliance — some of whose members are United Airlines, Germany’s Lufthansa and Thai Airways — are based on mileage.

Oneworld has 10 members serving 675 destinations in 130 countries, but it has partnered with five more carriers in its round-the-world offering. Even with that addition, however, it doesn’t compare with Star’s 24 members flying to 912 destinations in 159 countries.

Still, many travelers prefer Oneworld’s pricing method and find Star’s mileage restrictions too limiting, said Chris Guillebeau, an experienced jet-setter who has been to 103 countries and writes a blog called “The Art of Non-Conformity.”

There are some basic conditions your itinerary must meet, such as traveling in the same general direction and crossing both the Atlantic and Pacific oceans. Backtracking is allowed only on the same continent. Your journey must last at least 10 days and no longer than one year. Any member-carrier of either alliance can issue your ticket, though the taxes and surcharges may differ.

“Oneworld has a dedicated round-the-world desk through American Airlines, with staff that understand their own product much better than” agents at Star carriers, who are not specifically trained to book round-the-world trips, Mr. Guillebeau said. Making changes to your itinerary also tends to be less time-consuming on Oneworld, he added.

Both alliances allow free changes to the date and time of your flights, but there is a fee if you change the carrier or the routing.

“Just a couple of weeks ago, we became the first in the travel industry to enable customers to plan and book their round-the-world journeys online,” said Michael Blunt, Oneworld’s vice president for corporate communications. “The number of bookings made since this went live has surpassed all our expectations.” The alliance’s flagship round-the-world fare, Oneworld Explorer, “is used by around 50,000 people a year,” he said.

Both Mr. Blunt and Christopher Korenke, Star’s vice president, said that fares are reviewed every few months and changed based on proposals from each member. On Sunday, Star significantly increased its fares out of some countries, particularly those in business and first class, by as much as $4,000. There were some minor decreases as well, mostly due to currency fluctuations. Oneworld made similar changes last month.

The two alliances also offer other similar products, such as circle-Pacific fares that allow you to cross both the North and South Pacific, as well as air passes for different continents. Their prices have become less attractive than round-the-world fares, however.

“Together, these fares generate revenues totaling around $800 million a year,” Mr. Blunt said.

Mr. Korenke said the importance of those products goes beyond revenue, making travel for Star customers more seamless and promoting the alliance’s brand at the same time.

Despite the recent price increases, Mr. Guillebeau said they still beat individual fares in most cases. “It’s been really great for me,” he said. “Without the use of round-the-world tickets, the kind of travel I do would be much more expensive and probably much more difficult.”