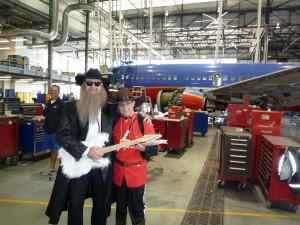 Public relations departments of airlines can’t catch a break. Not only is their industry under constant scrutiny by the public and the traditional media, now they have bloggers to worry about.

Let’s face it — the news hasn’t been great lately. How do you spin reducing services while adding fees? Or keeping fuel charges intact when oil prices are three times lower than they were when those charges were imposed? Part of a journalist’s job is to “unspin” what businesses — or the government, for that matter — tell the public, but another part is to do so fairly and to present different sides to every story.

Bloggers, however, have no such obligation. They are free to rant about any grudge they may hold against a company without worrying about bias, and they have become a part of the media that many airlines keep an eye on and even try to influence.

“Blogs are part of our daily work and we monitor them. There are some really good ones and some not that interesting but still a good source,” said Martin Riecken, head of corporate communications for the Americas at Germany’s Lufthansa. “We treat them as media outlets. They are on our distribution list and they get invited to events.”

Blogs are typically opinionated, but the best of them are as good at defending their views with facts and strong arguments as they are at presenting them. The best travel bloggers are usually people with some experience in the industry or with considerable knowledge about it.

“Blog posts are often unedited rants that have more immediacy than a well-edited reporter’s piece,” said Brett Snyder, who writes the blog Cranky Flier. “That being said, good bloggers are trying to get at the same thing as good reporters — the truth.”

Gary Leff, whose blog is View From the Wing, said the best way to get him to write about something is to understand his interests. “But also be ready for questions. A PR flak who doesn’t know his product isn’t likely to get very far — or might get made fun of,” he said. “Sending me an e-mail about a new credit card is going to be a good thing to do if the credit card is meaningfully better in some way than other existing cards.”

“It’s not entirely clear how much influence bloggers have, but I like to think we certainly play a role in shaping public opinion, and that can often result in increased pressure on airlines to change their behavior,” Mr. Snyder said.

He recently wrote a post “panning Lufthansa’s new social network,” saying there are enough such groups, and airlines should instead “try to participate with new applications and groups on existing networks,” he recalled. “I received an e-mail from someone at Lufthansa who said that they had taken what I said to heart and had created a group on Xiaonei, one of China’s biggest networks.”

There are also signs that government officials are taking travel bloggers seriously. Department of Homeland Security Secretary Michael Chertoff invited several of them to a round table last month to discuss any issues on their minds.

“Of course, influencing the airline or hotel industry isn’t what I’m after, and I don’t write for PR reps,” Mr. Leff said. “I love travel and miles and points. I love figuring out deals and sharing them… In a small way, I can help others through the knowledge I come across and through my own travel stories.”

Mr. Leff writes about various aspects of travel, while Mr. Snyder focuses on the airline industry. Both blogs are wide-ranging and in-depth at the same time and cover topics from prices to management issues to deals and promotions. Some blogs, such as Richard Ingersoll’s Frugal Travel Guy, are dedicated exclusively to travel deals. Others, such as Ben Schlappig’s One Mile at a Time, have a heavy emphasis on personal experiences.

Among the airlines, “Southwest is probably the most proactive” in engaging bloggers, Mr. Snyder said. “US Airways, JetBlue and Virgin America also do a very good job.” Among foreign carriers, he said he has found “warm receptions” from British Airways, Lufthansa and Air New Zealand. He added that he rarely hears back from American Airlines and Continental Airlines.

But Continental spokeswoman Mary Clark said that travel blogs are “a rich source” of feedback. “The reports on recent industry moves and rumors with editorial commentary are valuable to us as we gauge the effectiveness of any major change that we and our competitors make,” she said.