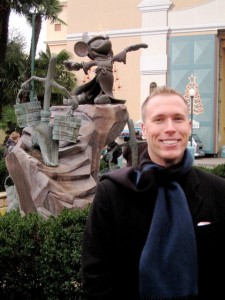 Douglas Oesterreich, regional director of revenue management for the Americas at the InterContinental Hotels Group.

How many horror stories about airline customer service have you heard? There are certainly plenty in the press and many more on various travel Web sites. Still, do we apply the same standards and scrutiny to companies outside the travel industry?

The nature of the airline and hotel businesses requires constant face-to-face interaction with customers, and an employee’s every step is evaluated by a flier or a hotel guest much more often than by a supervisor. In fact, thanks to the Internet, thousands of people can learn about an incident involving a front-line employee hours — if not days — before the company’s management does.

Earlier this month, a San Francisco man complained that a United Airlines agent took a break instead of helping his girlfriend catch a flight to Portland, Ore., to visit her dying mother. That story was posted on dozens of Web sites within minutes.

Hundreds of airline complaints are posted on the Internet every day. There is even a site called airlinecomplaints.org, with separate forums for each carrier. There, you can read about an American Airlines Inc. gate agent in Chicago who refused a pregnant woman’s request to pre-board her flight to Washington. Or about a Delta Airlines flight attendant who was not only rude to a passenger, but also called the police to meet the customer at the airport when she complained.

There are, of course, passengers with unreasonable demands and expectations, or with overly emotional reactions to an agent’s inability to oblige them. That is seen even more frequently in the hospitality industry — after all, we all like to feel at home even when we are thousands of miles away.

Douglas Oesterreich, regional director of revenue management for the Americas at InterContinental Hotels Group, said that, even if airlines treat you badly, they still “hold you at their mercy” because usually you have a nonrefundable ticket and can’t simply go to another carrier without buying another ticket.

“Hotels are held to a much higher standard,” he said. “If you are flying somewhere, you have only so many options, while typically, hotels are everywhere with the boom that happened in the past three years.”

Contrast that situation to the choice of cable companies you have. In my area in Washington, there are only two — RCN and Comcast — but I don’t have a choice because my building is wired only by RCN.

Early this month, the entire building lost phone, TV and Internet service around 7 p.m. on a Saturday. Service was not restored for more than 18 hours. Customer-service agents in the Philippines gave me and my neighbors conflicting information about the problem and how long it would take to fix it.

This may not be the best comparison, but if an airline delays your flight by 18 hours, you are entitled to certain compensation. I didn’t expect much of RCN for its failure to restore service for so long — just an apology and a day’s worth of credit to my account. I got neither, so I asked RCN’s management if that was consistent with the company’s customer-service practices.

“It is definitely RCN’s policy to apologize to a customer when we learn that there is any disruption in any service,” said Lisa Barder, director of communications and public relations.

In eight years as an RCN customer, I’ve experienced many disruptions of service, but I hadn’t received a single apology until Ms. Barder offered one for the latest outage. She asked a customer-service agent to contact me to “discuss” the issue and credit my account. I suggested in an e-mail that all customers in my building be given an apology and credit. Ms. Barder agreed that was the proper thing to do.

It might be healthy for businesses outside the travel industry to experience the pressure that airlines and hotels have been under from uncensored online customer reviews, which have led to many improvements in customer service. Some Web sites post general consumer complaints, but they are not nearly as influential as the popular FlyerTalk.com, for example.

Until then, this assurance from Ms. Barder may continue to sound like a corporate talking point: “RCN is committed to providing its subscribers with the best customer care and service experience.”